"1917" has one major flaw - it's irresponsibly nationalistic

The film has amazing acting and technical achievements, but its simplistic storytelling falls in line with Trumpism 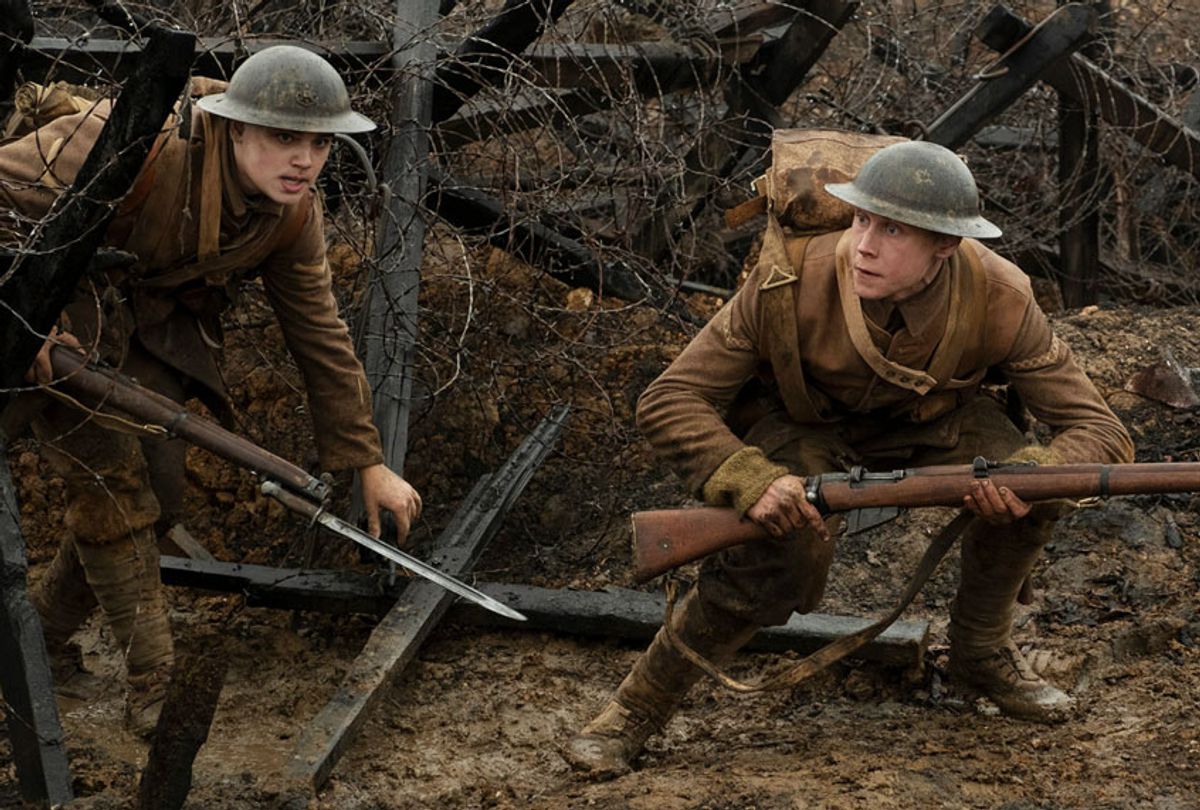 The following contains minor spoilers for "1917." If you haven't watched it yet, you can read Salon's non-spoilery review.

"1917" is a movie that perfectly fits President Donald Trump's agenda, even if the filmmakers did not intend for that.

I take no joy in criticizing "1917." Directed and co-written by Sam Mendes, the film is well acted by stars George MacKay and Dean-Charles Chapman, beautifully shot by cinematographer Roger Deakins and tells a harrowing story of heroism and survival that makes it a solid entry in the genre of war films. There is a beauty to the simplicity of its plot: Two men have to trek across a dangerous terrain in order to save the lives of 1,600 others, and time is a factor. From the sole perspective of the filmmaking craft, "1917" is worth a watch.

Yet as I watched it, I felt very uneasy — not for aesthetic reasons, but for moral ones. "1917," as its title indicates for the historically well-informed, is a World War I picture. Any film set during that conflict has a responsibility to account for the horrors of nationalism, much as a film that takes place during the Civil War must deal with slavery, and one that occurs during World War II must acknowledge fascism.

Unlike the Civil War and World War II, though, World War I did not have one side that was clearly right and another that was clearly wrong. While the Union and Allies were far from perfect, the former had the moral advantage of opposing a rebellion motivated by racist pro-slavery sentiment while the latter were literally crusading against Nazis. World War I, by contrast, was a global conflagration in which nationalism was the spark. Nationalism is any ideology that focuses on promoting the interests of a particular nation, usually with the goal of maintaining that nation's sovereignty over its geographic homeland, keeping it free from the influence of those defined as outside its "nation" and/or expanding its power on the world stage through imperialism. It seduces good men and women by calling on them to be "patriotic," and allows less innocent individuals to rationalize immoral actions using the same mental lens. (As the English writer Samuel Johnson put it, "Patriotism is the last refuge of the scoundrel.")

Since all of the major parties in World War I were nationalist, a movie like "1917" must acknowledge the inherent ambiguity of the conflict. Even if we are only being told a microcosmic story about two soldiers trying to survive a dangerous mission, we should still understand the larger tapestry in which those characters are mere threads. To do otherwise is to make war seem impersonal, like a natural disaster or a plague, rather than as an affliction caused by human beings — and for which people should be held accountable.

There is much moral accountability to go around in World War I. As historian Lawrence Rosenthal wrote, the Great Powers that started World War I did so because of ". . . a new and aggressive nationalism, different from its predecessors, [that] engaged the fierce us-them group emotions – loyalty inwards, aggression outwards – that characterise human relations at simpler sociological levels, like the family or the tribe." It was this uniquely aggressive form of nationalism that drove Bosnian Serb Gavrilo Princip – who self-identified as a Yugoslav nationalist – to assassinate the Archduke Franz Ferdinand of Austria in 1914, thereby starting World War I. It was a similar breed of nationalism that forged the numerous European alliances of the time and allowed major world leaders, with the full might of the global empires that they commanded, to decide that they were both obligated to fight each other . . .  and would profit, geopolitically and financially, from doing so.

One of that conflict's most powerful leaders, Kaiser Wilhelm II, identified as a German nationalist. He thought of himself as brilliant but has been more accurately described as having "viewed other people in instrumental terms, was a compulsive liar, and seemed to have a limited understanding of cause and effect." His bumbling in foreign affairs laid the foundations that helped culminate in that global conflict, in no small part because he was averse to listening to advisers with more knowledge than himself.

In other words, he was a proto-Donald Trump. And the only thing that even indirectly redeems him is the fact that the other leaders on the world stage at the time — America's Woodrow Wilson, Britain's David Lloyd George, France's Georges Clemenceau, the Austro-Hungarian Empire's Franz Joseph I, and many others — also drank from the cup of nationalism.

The horrors of nationalism were hardly limited to World War I. Nationalism is a sinister ideology because it encourages people to subordinate the interests of justice and humanitarianism to those of an impersonal collective, the "nation." It is often a Trojan horse for racism, xenophobia, misogyny and other forms of reactionary bigotry. It has been used to justify wars that the masses believe are being fought for them but really only benefit the ruling classes in the countries that are waging them. As the German theoretical physicist Albert Einstein famously said, "Nationalism is an infantile disease. It is the measles of mankind."

All of this needs to be said because a movie about World War I that completely ignores the ideology that begat that conflict is, at best, irresponsible and lazy. At worst it is implicitly nationalistic itself.

Take two other World War I movies — each made in the mid-20th century, when Hollywood censorship was much stricter than it is now — and how they incorporated a critique of nationalism into their stories. The 1930 film "All Quiet on the Western Front," directed by Lewis Milestone and based on the classic novel by Erich Maria Remarque, openly denounced war and understood that its characters were pointlessly dying because powerful nationalist leaders had agendas that were indifferent to their fate. The 1957 movie "Paths of Glory," directed by Stanley Kubrick and based on the book by Humphrey Cobb, told the story of French soldiers who were executed for cowardice when they were unable to perform an impossible task assigned by military leaders, men who used ostensible patriotism as an excuse for depraved self-interest. Even the 2017 superhero film "Wonder Woman," which was primarily set during World War I, implicitly acknowledged the absurdity of that conflict when the protagonist confronted the Greek god of war Ares. (Director Patty Jenkins admitted in an interview that "We are in a very WWI world today with nationalism and how it would take very little to start a global conflict.")

None of that introspection or thoughtfulness appears in "1917." The military leaders on the British side are depicted as empathetic and wise; they are serious and blunt, to be sure, but only because circumstances demand that of them. When they make mistakes, it is because of faulty information, not because the system in which they are participating is itself fatally flawed. The closest thing to an exception is Colonel Mackenzie (Benedict Cumberbatch), who is depicted as so desperate to fight that he was willing to disregard direct orders and send his men into battle despite certain doom. Yet his actions are viewed as the flaws of an individual, not a system; another British military officer, Captain Smith (Mark Strong), warns one of our protagonists to give the order with witnesses present to thwart Mackenzie in case he behaves in precisely that fashion.

Meanwhile this modicum of complexity is completely missing from the opposing Germans. They are depicted as unilaterally evil: Sneaky, murderously attacking our heroes even when they show them compassion or rigging sadistic traps that horrify the protagonists and catch them off guard.

The crucial observation here is that when you set a movie during World War I but use a simplistic narrative structure which tells audiences that one side was completely right and the other completely wrong, you (perhaps unintentionally) validate the nationalist impulses that led to such terrible bloodshed.

I'm sure that some people reading this review will insist that "1917" isn't a pro-war film . . . and they're right. But saying war is hell is not the same thing as saying that a particular war was inherently evil. The Civil War and World War II were hell, but both needed to be fought in the name of a greater good. World War I was hell and was fought purely for the sake of the imperialist European powers and their various geopolitical and financial agendas. That is a critical difference.

Similarly, I'm sure there are people who will defend "1917" by saying that it's the story of individual soldiers in a greater conflict, not a political manifesto. There are three problems with that argument. First, as mentioned earlier, it is immoral to tell a story about a war without analyzing the reasons behind that war. Also, films like "All Quiet on the Western Front" and "Paths of Glory" also focused on the stories of individual soldiers while still including the broader nationalistic context. And finally, any movie about a real-life war is inherently political. Even a supposedly "neutral" approach is, by default, taking a political stand about the morality and immorality of war itself.

Now we live in a world where America is on the brink of war with Iran, where right-wing nationalists in this country are terrorizing racial minorities in the name of being "pro-America," and in which the talk of national borders is used to justify ripping apart families because they don't belong to our "nation." Lest there be any doubt that Trumpism is a nationalist ideology, Trump himself appeared before the United Nations in September and declared that "the free world must embrace its national foundations. It must not attempt to erase them or replace them."

He added, "Wise leaders always put the good of their own people and their own country first. The future does not belong to globalists. The future belongs to patriots."

That rhetoric motivated World War I just as much as it drives Trumpism today. As such, rewarding "1917" with awards and acclaim — at least acclaim that ignores its problematic politics in order to myopically focus on its abstract artistic merits — implicitly validates a philosophy that our world desperately, desperately needs to delegitimize.