It isn't just the Second Amendment: If we can't control social media and "corporate speech," we'll never end this 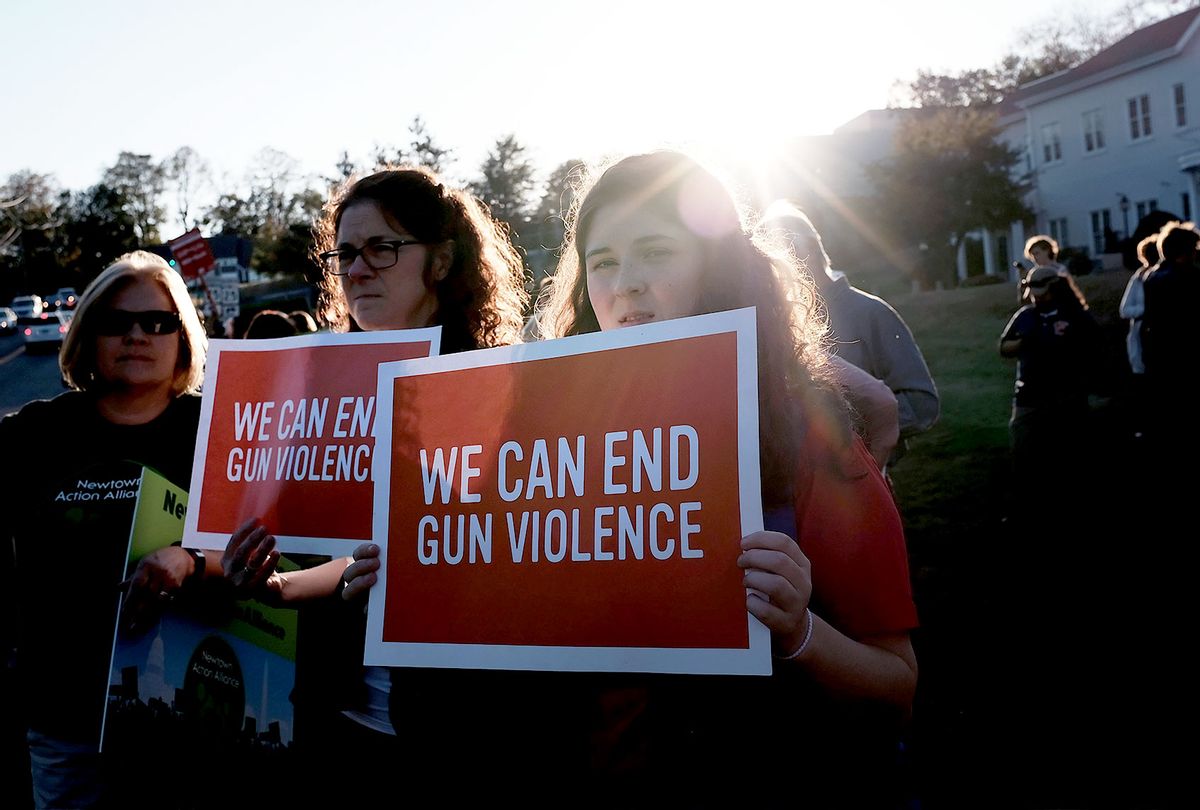 Dozens of people attend a vigil remembering the 58 people killed in Sunday's shooting in Las Vegas and calling for action against guns on October 4, 2017 in Newtown, Connecticut. The vigil, organized by the Newtown Action Alliance, was held outside the National Shooting Sport Foundation and looked to draw attention to gun violence in America. Twenty school children were killed at the Sandy Hook Elementary School shooting in Newtown on December 14, 2012. (Spencer Platt/Getty Images)
--

For several years after the 1998 Columbine high school massacre, and again after the 2012 Sandy Hook massacre, I wrote so often about the causes and consequences of American gun slavery that I felt a bit like the 19th-century abolitionist William Lloyd Garrison, railing against an evil that seemed indomitable.

In our own time, the real root causes of our gun mayhem seem so hard for Americans to understand or even to rebut that my efforts to highlight them — especially in the Washington Monthly in 2016 and in the Atlantic, with law professor Daniel Greenwood, as well as on the Brian Lehrer show on WNYC — hardly altered public perceptions.

So I left off for a while, recognizing that most of us perceive only what we're incentivized most strongly to perceive, and ignore what we're pressured and trained to ignore.

But those incentives and pressures are shifting now. Let me try again to help the perceptions and responses get ahead of what's really driving gun violence.

The most powerful immediate drivers are fairly obvious: First, the aggressive marketing and easy availability of guns, some of which shouldn't even be in any civilian hands. Second, the racial and ethnic or religious hatred that drove Dylann Roof in a Black Charleston church in 2015, Robert Bowers in a Pittsburgh synagogue in 2018 and Peyton Gendron in a Buffalo supermarket this month, among others. Third, the mentally deranged but seemingly "raceless" rage that drove Adam Lanza in the Sandy Hook elementary school in 2012, Stephen Paddock at a Las Vegas concert in 2017, Nikolas Cruz in Parkland in 2018 and Salvador Ramos in a Texas elementary school this month. Those are the virulent symptoms and accelerants, but not the root cause that grips millions of us so tightly and intimately that we're too numb to it to be alarmed or even to name it, let alone change it.

I'm not thinking about the evil in our divided human hearts that runs back to the Garden of Eden and to Cain's murder of Abel. I'm not even thinking mainly about American jurisprudence that has reinforced the Second Amendment and its enthusiasts. I'm thinking about the jurisprudence that, even more directly if more subtly, has expanded First Amendment protections of the commercial speech that indoctrinates us, 24/7, to embrace narrow, self-interested strategies of "self-improvement" and protection.

That kind of commercial speech, rendered ever more relentless, more intrusive and more intimate, strikes me as the main reason why we're losing our capacity and inclination to bind our sense of selfhood to our contributions to the good of the whole — to "enlightened self-interest," as Alexis de Tocqueville and others called it.

Commercial speech is degrading our public and private lives, not malevolently or conspiratorially but for the most part mindlessly. It's groping us, goosing us, titillating us, tracking us, indebting us and, sometimes, as in commercials for drugs and home-protection systems, intimidating us, bypassing our brains and hearts on its way to our lower viscera and our wallets. Even ads that are "entertaining" incentivize defensive selfishness and greed.

Some conservative Roman Catholic thinking calls for a "common good constitutionalism" aimed at reconfiguring and curbing self-interest by redirecting the energies unleashed by today's markets über alles neoliberalism. But a theocratic, semi-authoritarian solution won't work in our society, which in its best civic-republican mode is "ethical and pragmatic, disciplined and free," as a mentor of mine, the late literary historian Daniel Aaron, put it.

To renew that civic-republican ethos, we need first to face a hard truth that, in my experience, many Americans consider too close for comfort: Commercial speech, combined with social media, has deranged the public sphere by fragmenting, privatizing and alienating millions of us, and I don't mean only the shooters.

The toxic effects of commercial speech and social media have deranged the public sphere by fragmenting, privatizing and alienating us by the millions. I don't just mean the shooters.

Those who become shooters have indeed been mentally disturbed or especially susceptible to displacing their early personal hurts and resentments, often consequences of social fragmentation and family disintegration. But many others among us "merely" embrace conspiracy theories and believe whatever Donald Trump or Tucker Carlson tell them. Still others — and here's where it gets too close for comfort for many of us — depend on retirement accounts or other forms of investment in the publicly-traded corporations and private-equity ventures that sustain the deluge of commercial speech that's miseducating and disorienting the most impressionable, most vulnerable and most badly stressed among us.

That deluge peddles false escapes into impulse buying and degrading entertainment, and for almost the last three decades social media platforms have amplified and catalyzed the viral spread of the violent displacement of rage and envy by the most deeply wounded among us.

Retirees, gung-ho investors and financial managers are all implicated in the investments that bypassing other people's brains and hearts in ways that weaken their inclination and ability to sustain public trust. The hard truth that few of us want to face, including those of us who produce "news" as well as consume it, is that the commercial "speech" that our employment and our supposed standards depend on must somehow be altered and curbed.

A rare acknowledgment of the problem — in the form of a boast — came in CBS president Les Moonves' famous declaration, at a Morgan Stanley conference in 2016, that Donald Trump's presidential campaign "may not be good for America, but it's damn good for CBS."

One necessary step will be reversing the Supreme Court's notorious Citizens United ruling, which extended First Amendment protections to corporate "speech," both in the form of direct campaign contributions and untraceable, unlimited "dark money" spending.

That kind of jurisprudence hands the megaphone, along with almost incalculable political power, to incorporeal entities, and leaves ordinary citizens who struggle to advance the public interest feeling powerless and straining to be heard. It doesn't strengthen speech but hollows it out, incentivizing selfishness and leaving us with empty platitudes. Pumping corporate speech into politics leaves a vacuum in public beliefs and virtues that clueless armed citizens have too often tried to fill by besieging state capitols — and storming the U.S. Capitol.

These are too often the same people who refuse to wear masks because masks protect others more than themselves. Many of them buy guns not in the theoretical interest of making  society safer, but to protect themselves against a society that they're making less safe day by day.

Still others work for investment banks and hedge funds, or pour their money into them, not to make business more efficient and effective but in order to accumulate enough wealth to insulate themselves from the decay their own activities accelerate, whatever clouds of pious public rhetoric they may offer. Others offer gifts, including large philanthropic donations, more intended to make themselves look good than to help the wounded and bereft around the world whom their activities have damaged.

"How many conservative economists does it take to screw in a lightbulb? None. The Invisible Hand will take care of it." That's an old joke about the false presumption that through some magical process a greater good will flow from everyone pursuing their own individual "good," and the less interference there is from "bleeding heart," "busybody" big-government liberals, the better.

Mass shootings may not be inherent in capitalism, but they stem from our individual drive to maximize narrow self-interest without considering the unintended consequences.

The accelerating danger of mass shootings and other forms of gun mayhem may not be inherent in capitalism as such, but in our long-internalized, individualistic drive to maximize personal profit and narrow self-interest, rather than reconciling what we do to "make a living" with its unintended consequences. The real danger lies in denying that a democratic polity must ultimately have sovereignty over an economy, and in pretending that wealth is anything more than a necessary support for a commonwealth.

"Ill fares the land, to hastening ills a'prey, when wealth accumulates and men decay," wrote Oliver Goldsmith in 1777, as the American republic was  being born. Now that the republic is in danger of dying, let's take that warning to heart and find ways to pledge our lives, our fortunes and our sacred honor to defending its truth.

That kind of idealism may have been outflanked in our current era by developments that can only be described as fascist. We may have to move to tighter organizing and take to the streets. We may have to follow the example of unarmed peoples who've brought down vast, national security states — in Eastern Europe, in South Africa, in British India — by following the examples of Gandhi and Martin Luther King Jr., with disciplined purpose and our eyes on the prize, even at risk of death.