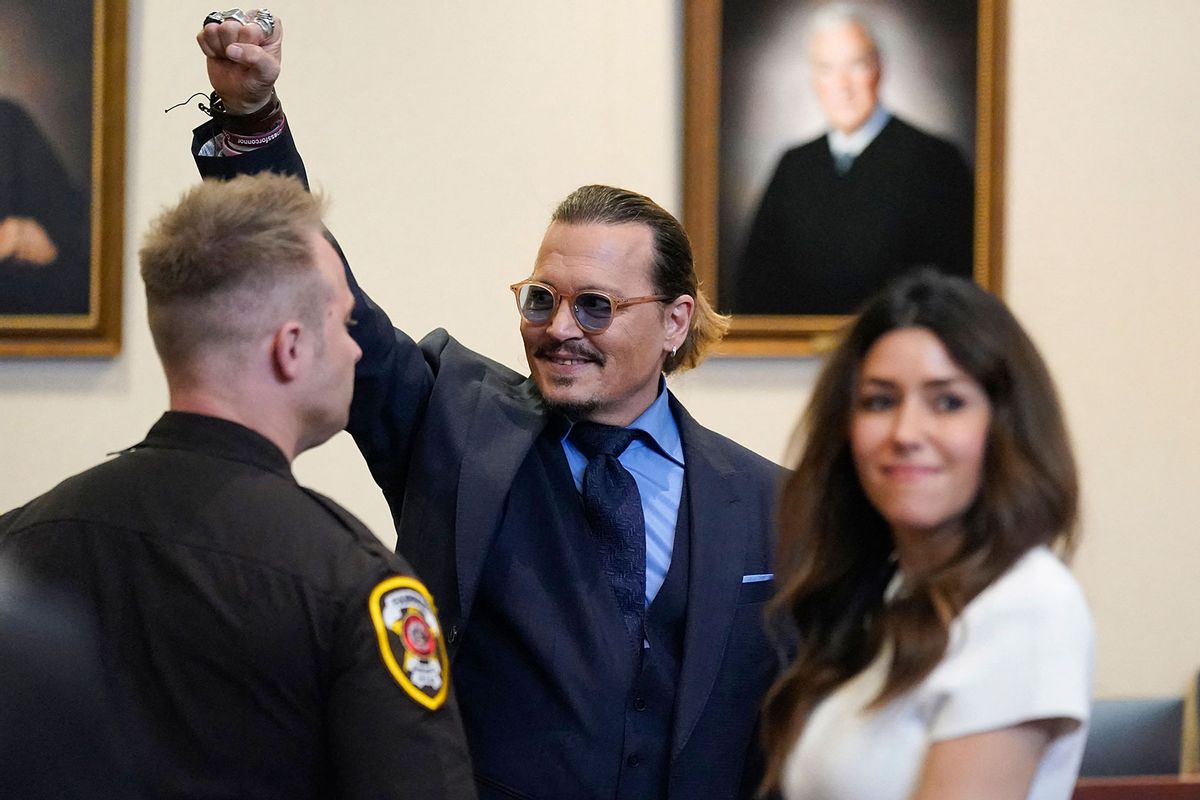 Actor Johnny Depp gestures to spectators in court after closing arguments at the Fairfax County Circuit Courthouse in Fairfax, Virginia, on May 27, 2022. (STEVE HELBER/POOL/AFP via Getty Images)
--

You didn't have to follow all six weeks of the John C. Depp, II v. Amber Laura Heard  coverage to understand its potential to set a precedent in the court of public opinion. You didn't even have to adopt the social media tendency of making it a competitive spectacle, pitting Johnny Depp's very large, vocal, and emotionally invested fanbase against Amber Heard, to understand something larger was at stake

All you need to understand is the optics playing out inside the district court in Virginia's Fairfax County on Wednesday, where Heard, the defendant, sat on one side while Depp's legal team represented its absent client as the verdict was read.

In that courtroom, as one cable news legal analyst pointed out, Heard was positioned closer to the jurors than Depp. They could see all of her reactions to statements being made about her on the stand by Depp and other witnesses.

RELATED: Depp verdict deemed "a win for all men"

Surely they noticed her deflated, downward gaze as each of the jury's determinations on Depp's claims was read, finding her liable for three counts of defamation to the tune of $15 million in damages. Depp's award breaks down to $10 million in compensatory damages and $5 million in punitive, with the second number largely being symbolic. A Virginia statute caps any financial awards rendered by a court to punish wrongdoers at $350,000.

But this was never really about the money or a supposed reputational cleansing, as Depp's team implied throughout the trial.

This was about publicly establishing the power differential between two messy people who used to be married. One is a man whose career and celebrity have been established for many more decades than those of the woman accusing him of abuse.

This was never really about the money or a supposed reputational cleansing.

That's why Heard had to be in that courtroom as the seven-person jury's verdict was read, while Depp enjoyed his triumph in London. Yes – the cap to this long, strange trip has been the actor's unscheduled appearances in Britain with guitarist Jeff Beck.

Their first jam took place Sunday at Sheffield City Hall in Yorkshire, followed by performances on Monday and Tuesday with the former Yardbirds guitarist at Royal Albert Hall.

The second London gig was reportedly attended by Depp's ex Kate Moss, according to multiple reports. Moss took the stand on his behalf on Wednesday, May 25 to deny Heard's claim that Depp had pushed Moss down the stairs when they were together in the 1990s.

"Six years later, the jury gave me back my life," reads a statement from Depp, one that doesn't explain how much of a downgrade he's suffered given the fact that he's still drawing crowds by appearing onstage with a two-time Rock and Roll Hall of Fame inductee, you know, just because.

Depp previously brought a libel suit against News Group Newspapers and Dan Wootton, the executive editor of its tabloid, the Sun, over publishing a story in April 2018 that referred to Depp as a "wife beater." He lost that case in 2020 following a Royal Court justice's determination that the Sun had proved its article was "substantially true."

According to CNN Depp's spokesperson described these London performances as her client fulfilling previous contractual obligations, and not taking an early victory lap in the land of his previous legal defeat.

Does it matter if he were? Not to his adoring public, some of whom likely strummed out some air guitar riffs in parasocial celebration.

Five men and two women unanimously decided that Heard defamed her ex-husband in a 2018 op-ed published in The Washington Post, in which she describes herself as a "public figure representing domestic abuse." He contended the editorial's publication led to Disney cutting ties with him, ending his starring role in the "Pirates of the Caribbean" franchise.

Heard never mentions Depp by name in the article, but his attorneys contend that it refers to the allegations she makes in the 2016 documents she filed to commence their divorce proceedings. The two were married from 2015 until 2017.

Heard filed a countersuit against him in 2020 for $100 million, which the jury also weighed and returned with a mixed verdict, determining that Depp defamed Heard in one of three counts in her countersuit linked to a statement by lawyer Adam Waldman. For this, she was awarded $2 million, including zero in punitive damages.

This punier number didn't quite register at first on Fox News, which reacted in its headline chyron as the jury's verdict was being read with, "Jury Finds Amber Heard Defamed Johnny Depp" before amending that to "Jury Finds Depp Proved All Elements of Defamation" to eventually just, in huge letters, "JURY RULES IN FAVOR OF JOHNNY DEPP" that stood for a time after the award in favor of Heard was read.

Eventually, this was toned down to match CNN's "Jury finds both Heard and Depp liable for defamation" headline, for the folks sticking around for more context and analysis of what this all means.

CNN's team seemed baffled by the verdict despite the weeks' worth of Twitter and TikTok raging against Heard, which may not have influenced the jury but, at the very least, reflected some measure of how she and her testimony were perceived.

"This, you know, puts a bit of a stake in the heart of the notion that you believe all women," says Martha MacCallum

Fox News, on the other hand, lodged its thermometer in right-wing America's grumpy orifice from the trial's start, and has been sharing its readings at every opportunity.

Accordingly, Judge Jeanine Pirro characterized the decision against Heard as the cost of her alleged dishonesty, "because a woman made a decision that she was going to ride on the coattails of real battered women."

"I think the message that's being sent by the jury, to anybody who wants to proclaim that they have been physically or sexually abused is you better be telling the truth, number one," opined its legal analyst Brian Claypool.

And this reflects the outcome advocates for domestic abuse survivors have been fearing. Whether we invested any time or feelings into this trial, the outcome will resonate throughout the culture, and mainly in life-altering cases that may never see the inside of a courtroom or be registered at a police station.

Heard speaks to this notion in her public statement, released minutes after the verdict was read. "I'm even more disappointed with what this verdict means for other women," it said. "It's a setback. It sets back the clock to a time when a woman who spoke up and spoke out could be publicly shamed and humiliated. It sets back the idea that violence against women is to be taken seriously."

One immediate reaction to the verdict came from host Martha MacCallum, who echoes this, albeit in a depressingly different and accurate way. "This puts a bit of a stake in the heart of the notion that you believe all women . . . that regardless of your sex, you can either be telling the truth or not be telling the truth depending on any given individual circumstance in these situations," MacCallum said. "And for a while, that idea was gone. And it appears that with this some semblance of justice . . . was meted out by this jury."

Those words, "some semblance of justice," aren't unexpected from Fox News, which has been firmly on Depp's side since the trial began in April.

Siding with Team Depp is good for its bottom line and reflects the sentiment of all the pro-Jack Sparrow/ anti-Amber Heard trolls in its audience, and vindicates their righteous ire at a "crazy" woman taking on a man who, in this circumstance, they've cast as the hero.

Viewed by that standard, Depp was always going to win. And we'll never know how many other people stand to lose because of these publicly established legal and social media-perpetuated precedents, simply because they aren't famous enough for us to pay attention.