Biden's right to be frustrated — he's had real accomplishments. But the real enemy isn't Trump; it's himself 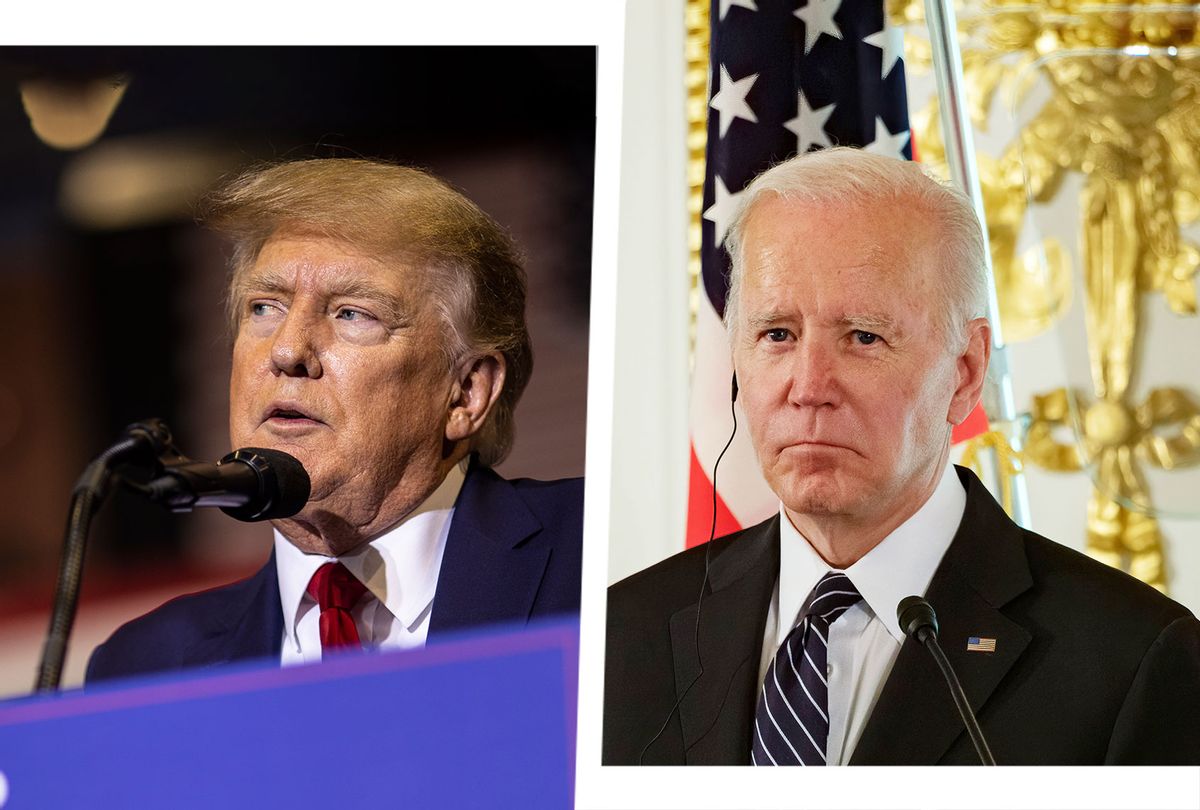 According to an article published this week by NBC News, President Biden is upset with his staff. It seems the president believes some members of his own administration have undercut his message on occasion, thereby leading to his extremely low poll numbers.

Joe, it seems, can't get a break — and he thinks his own people are the cause.

Welcome to the party, pal. That's exactly what I've been saying for several months. I won't go back over the grisly details, but suffice it to say that it appears Biden has finally joined the chorus.

Biden has been blamed for every calamity that has befallen the country since he took office. His detractors blame him for high inflation, high gas prices, mass shootings and the pandemic, and if given the chance would probably blame him for climate change — though most of his detractors don't believe in that, or at least claim not to. If they could, they'd blame him for toenail fungus.

Then again, some diehard Trumpers were among those who cheered Biden when he was in Poland and said that "for God's sake," Vladimir Putin couldn't remain in charge. Then 15 minutes later the president's staff tried to walk back that comment — pissing off nearly 8 billion people on the planet. Hey, if you're going to screw it up, go big or go home. Of course, the next day Biden had to double down on exactly what he had said the day before, and the whole thing made him look weak and vacillating. What Biden's statement actually showed was how tone-deaf his staff is to what the rest of the country thinks. Americans have had enough of politicians saying, "What I really meant to say was . . ." and took Biden's statement as a breath of fresh air, at least until his underlings screwed him.

June is now upon us and we're staring at a long, hot summer before the midterm elections in the fall, which will decide whether the Biden administration lives or dies. According to NBC News, Rep. James Clyburn, D-S.C., whose endorsement in the 2020 Democratic primaries helped rescue Biden's struggling candidacy, said, "I don't know what's required here, but I do know the poll numbers have been stuck where they are for far too long."

Biden apparently wants more Democrats talking about his accomplishments this summer — and he's not wrong. The infrastructure bill he signed and pushed through Congress does more for the average American, particularly those in red states, than any president has done for them in the last 40 years. You don't hear about it much anymore, from Biden or any other Democrat — they're too busy being swept under the bridge by current events. They haven't framed political arguments well and they have left too much oxygen in the room for those who still want to promote sedition and the "Big Lie."

But none of this is new. The fact that it's taken so long for Biden to recognize this should be of concern to all of us. Maybe he's got a handle on it now, but damn — how long does it take you to read a room?

Sure, he delivered a historic infrastructure package. We have historically low unemployment rates. We've gotten a whole lot of people vaccinated against COVID. America is once again respected and Biden appears to be making headway internationally — bolstering both NATO and Ukraine. And still, his approval ratings stink.

And then there's Donald Trump — that's a man who is excellent at reading the room, but has no idea what room he's in. He just knows that wherever it is, he's going to con someone out of their money.

So while Biden is wondering what he has to do or who he has to kill to get better polling numbers than his predecessor, the rest of the nation is wondering:

"Will Donald Trump ever get indicted?"

The last time I heard that question was at lunch with a Justice Department source I've known for close to 30 years. He asked me that.

When a Justice Department source asks you, "Will Trump ever get indicted?" you know something has gone wrong.

My source, who has worked in Washington for most of his professional life, told me I had missed the point. According to him, Trump has yet to be indicted because of the fear that in doing so the DOJ will expose itself to charges of corruption, favoritism or incompetence. That echoes the sentiments of several former Trumpers, including his ex-fixer Michael Cohen. All of them want Trump prosecuted. They aren't alone.

I also spoke with a judge in Georgia, where there's some hope that Trump could be brought to justice because of his infamous phone call with Secretary of State Brad Raffensperger after the 2020 election. "Don't count on it," I was told.

And who gets the blame for that? Yeah, you guessed it: Joe Biden, and to a lesser extent Attorney General Merrick Garland. "It's Biden's fault because he appointed Garland," we are often told. These naysayers aren't Trumplicans. They're Democrats, mostly progressives who are angry that Joe Biden isn't Bernie Sanders.

Singer John Legend wants to clean up the Department of Justice. So does Michael Cohen. While Legend points to how minorities, women, immigrants and the LGBTQ community are treated differently, Cohen stresses that the corruption is far more pervasive and endemic. The truth is, according to Cohen, that Trump wouldn't have been successful in manipulating the DOJ during his administration if it hadn't already been corrupted.

And if that's true, then you can't even blame Trump for it, nor can you expect Biden to clean it up with a snap of his fingers. Trump just never gave us a chance to talk about it because he spewed rapid-fire paroxysms of violent rhetoric. On the other hand, Biden, in his attempt to appear more "presidential," gives us plenty of time to ponder his administration's shortcomings.

But that word, "presidential," doesn't mean the same thing it used to. You can blame Fox News founder Roger Ailes, I suppose, for his contribution to the "television presidency" — after all, he was responsible for both Ronald Reagan and Mitch McConnell, two examples of cursed bipedal homo sapiens destined for a museum exhibit of life forms that thrived without functional brains.

Biden is better at controlling the media than Trump ever was. But bringing Korean boy bands to the White House is just a pointless deflection.

It's not that Biden doesn't understand television or the media — in fact, his administration is better at controlling it than Trump ever was. But there's the rub. Trump was dialed up to 11 all the time. Biden has dialed it back, curtailed his natural instincts to talk — remember, that was one of Barack Obama's biggest criticisms of Biden — and has caged the media beast by not engaging us instead of actively fighting against us. But there is another way to do it.

Biden claims he loves the press, but his administration is run by those who constantly apologize for him when they shouldn't, while trying to limit his interaction with us so they don't have to run interference.

Biden's also very good at deflection. On Tuesday in the White House briefing room, we were treated to the "Grammy-nominated international icons" BTS, a K-pop boy band. Many reporters cheered effusively. I almost choked watching it.

I thought of how Sam Donaldson or, God forbid, Helen Thomas, would have reacted to such blathering and I knew once again that the other problem in Washington is us — the press. We don't wear ourselves out trying to dig out the news; we merely react to what is in front of us. We've become nothing more than stenographers — or fans.

"We have met the enemy and he is us," Walt Kelly's cartoon possum Pogo told us decades ago. Damned if he wasn't right.

So, in the end Biden is right to be upset with his staff and his fellow Democrats for not touting his achievements, but wrong about where he places the blame. The president needs to look in the mirror, and needs to frame the arguments far better than he has so far. He has failed to get the country excited, failed to respond to legitimate criticisms and failed to communicate effectively.

The only consistent message out of the Biden camp boils down to "We're better than Trump."

That's really not the ringing endorsement some smug and self-satisfied Democrats think it is. The country has had enough of Trump and his cretinous band of intolerant moles, who are more adept at living in the dark and feeding on garbage than the most resilient New York sewer rat. Hell, they did it for years even before Trump came along, skittering around the fringes of government, voting out of spite and angry at the world and their place in it, without ever understanding they were to blame for their own shortcomings. All Trump did was to bring them into the light and rally them to his narcissistic cause.

It doesn't take much to say you're better than that flea circus of pestilence. And ultimately Biden has to take personal responsibility for what's gone wrong.

Harry Truman famously said, "The buck stops here."Donald Trump's version was, "The sawbuck stops here — but blame is for everyone else."

To right the American ship of state, Joe Biden has to own his shortcomings (a recurring campaign theme) and rally his troops with the energy of Donald Trump — but without the hate, the lies, the vitriol or the sedition.

Biden has shown flashes of brilliance, but his administration has been wildly inconsistent. That's not what the country needs, and it's the biggest reason he faces a high risk of failure, or even disaster, in the midterms.

Read more from Brian Karem on the Biden White House: