"I respect Attorney General Barr. So, I accepted what he said and what he was saying,” Ivanka told the panel. 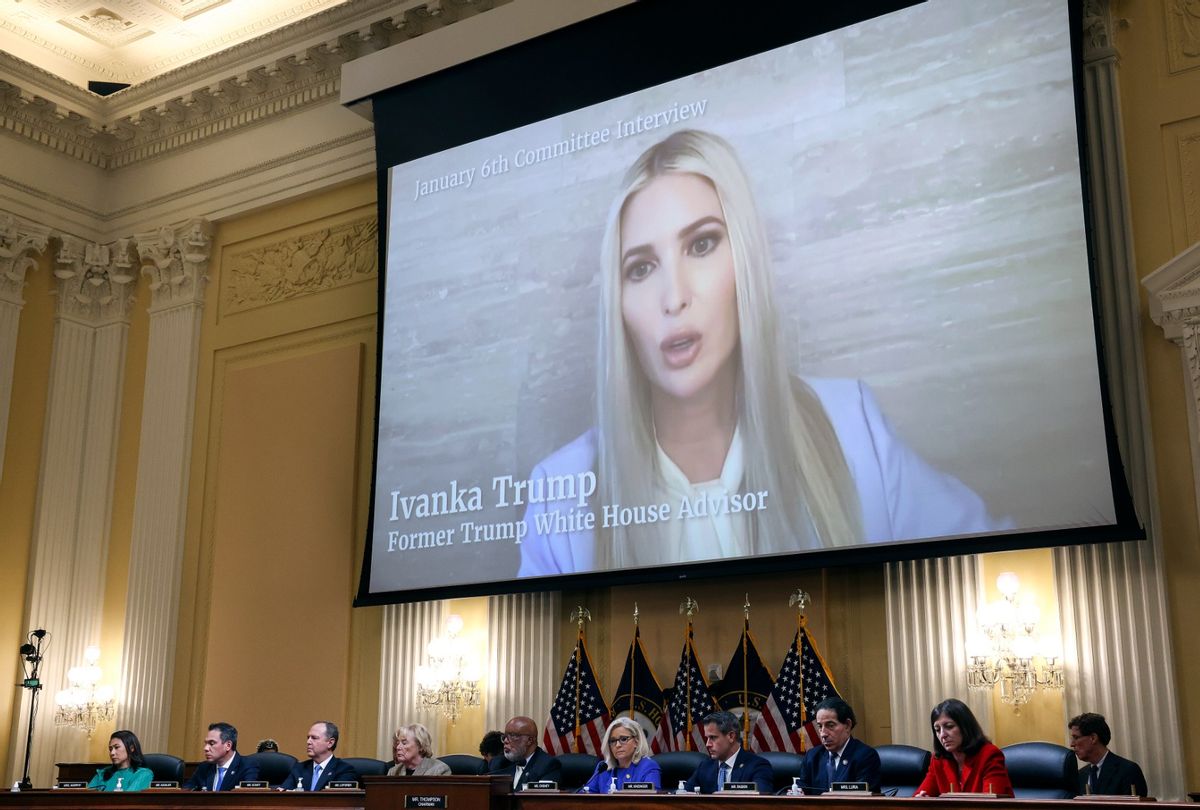 Ivanka Trump, the daughter of President Donald Trump, is seen on a screen during a hearing by the Select Committee to Investigate the January 6th Attack on the U.S. Capitol on June 09, 2022 in Washington, DC. (Photo by Win McNamee/Getty Images)
--

Ivanka Trump testified to the House select committee on the Jan. 6 insurrection that she believed Attorney General Bill Barr's assessment that her father's election fraud claims were "bullshit," according to deposition video aired during the panel's first hearing on Thursday.

Barr released a statement after the election announcing that the Justice Department had found no evidence of widespread fraud in the election. The committee's legal team asked Ivanka Trump how Barr's statement affected her "perspective about the election."

"It affected my perspective. I respect Attorney General Barr. So, I accepted what he said and what he was saying," she told the panel.

The committee also played clips from Barr's deposition. The former attorney general, who stepped down amid former President Donald Trump's fury over Barr's statement, repeatedly told the committee that he told Trump and his team that the fraud claims were "bullshit."

"I had three discussions with the president that I can recall. One was on Nov. 23, one was on Dec. 1 and one on Dec. 14, and I've been through sort of the give and take of those discussions, and in that context I made it clear I did not agree with the idea of saying the election was stolen and putting out this stuff, which I told the president was bullshit," he told the committee's legal team.

Barr said he "didn't want to be part of it" and that contributed to his decision to step down.

Barr also discussed TrumpWorld claims that voting machines were somehow rigged to flip votes. He said the claims were "complete nonsense" and said he had told Trump that it was "crazy stuff and that they were wasting their time."

"I saw absolutely zero basis for the allegations," he said, adding that it was a "great, great disservice to the country" to spread them.

At least four former Trump aides testified to the panel that they told Trump and his team that he had lost the election, but the former president continued to push to stay in office — which could potentially serve as evidence of criminal intent on Trump's part. Those officials included Barr, former Trump campaign spokesman Jason Miller and two Trump campaign lawyers, Matt Morgan and Alex Cannon.

"I repeatedly told the president in no uncertain terms that I did not see evidence of fraud, you know, that would have affected the outcome of the election," Barr said. "And frankly, a year and a half later, I still haven't seen anything to change my mind on that."