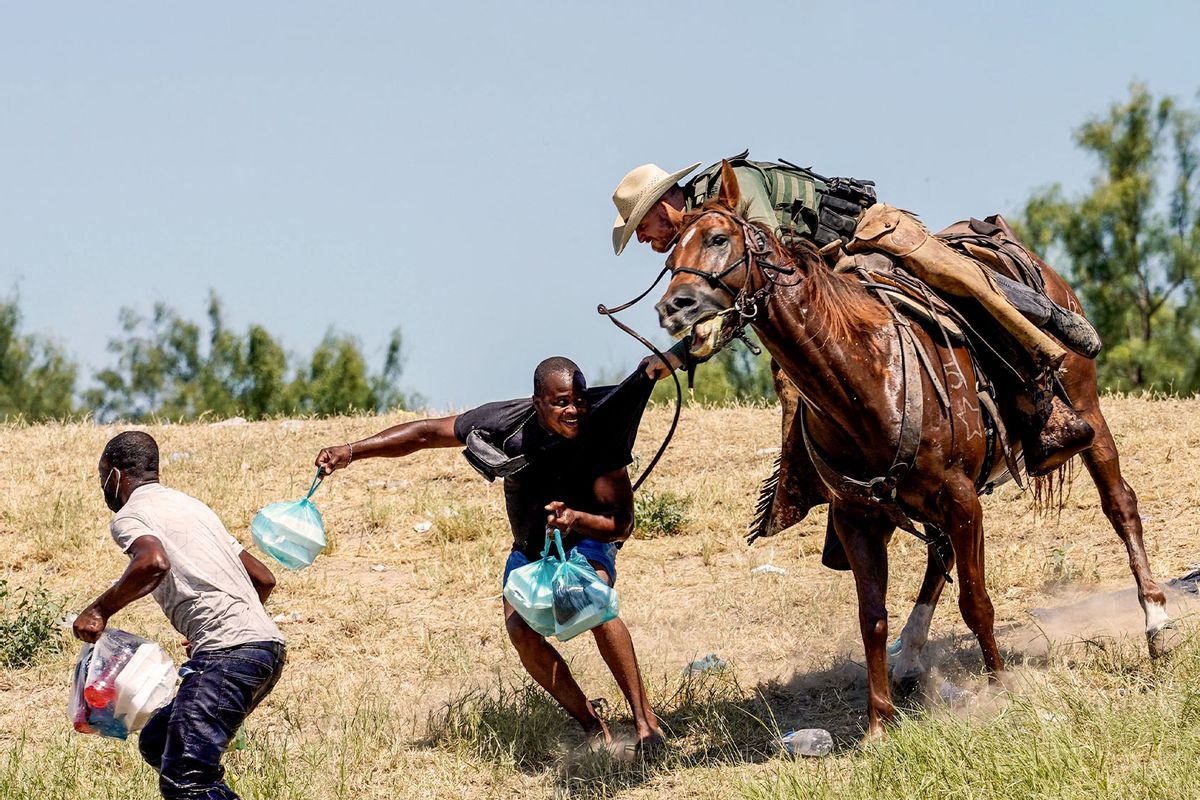 A United States Border Patrol agent on horseback tries to stop a Haitian migrant from entering an encampment on the banks of the Rio Grande near the Acuna Del Rio International Bridge in Del Rio, Texas on September 19, 2021. (PAUL RATJE/AFP via Getty Images)
--

The Department of Homeland Security (DHS) is investigating a coin memorializing an image of a border patrol agent on horseback violently corralling a Haitian migrant in Del Rio, Texas.

The unofficial "challenge coin," first reported by The Miami Herald, is inscribed with the sentences "Reining it in since May 28, 1924" and "Yesterday's border is not today's border." Another sentence along the coin's rim reads: "You will be returned." The date on the coin, 1924, reportedly marks the passage of the Johnson-Reed Act, which formally established the U.S. Customs and Border Protection (CPB) in an effort to "drastically cut the total number of immigrants allowed in each year and effectively cut off all immigration from Asia," as Smithsonian Magazine noted.

According to the Herald, at least 41 of the coins have been purchased through eBay at $15.19 apiece. Luis Miranda, the assistant commissioner of CPB, has said that anyone selling the memorabilia will face "appropriate action." He added that the agency will "send a cease-and-desist letter to any vendor who produces unauthorized challenge coins using one of CBP's trademarked brands."

"The images depicted on this coin are offensive, insensitive, and run counter to the core values of CBP," Miranda said. "This is not an official CBP coin."

Guerline Jozef, co-founder of the Haitian Bridge Alliance, which fights back against human rights violations of Haitian asylum-seekers, called the coins "outrageous" and "beyond inhumane."

"The fact they have created merchandise depicting the likeness of people who suffered cruel and inhumane treatment should not be tolerated by DHS or the Biden administration," Jozef told the Herald.

The coin's imagery dates back to last September when pictures surfaced of Border patrol agents on horseback aggressively handling some 15,000 Haitian migrants in Del Rio. The incident was immediately followed by the resignation of the U.S. special envoy to Haiti, Daniel Foote, who called America's policy approach to Haiti "deeply flawed." At the time, he claimed that his "policy recommendations have been ignored and dismissed."

Since the photos appeared, the border agents in question have been prohibited from engaging with migrants any further. And According to Fox News, several of them will be charged with "administrative violations," though they will not be held criminally liable for possible human rights violations.