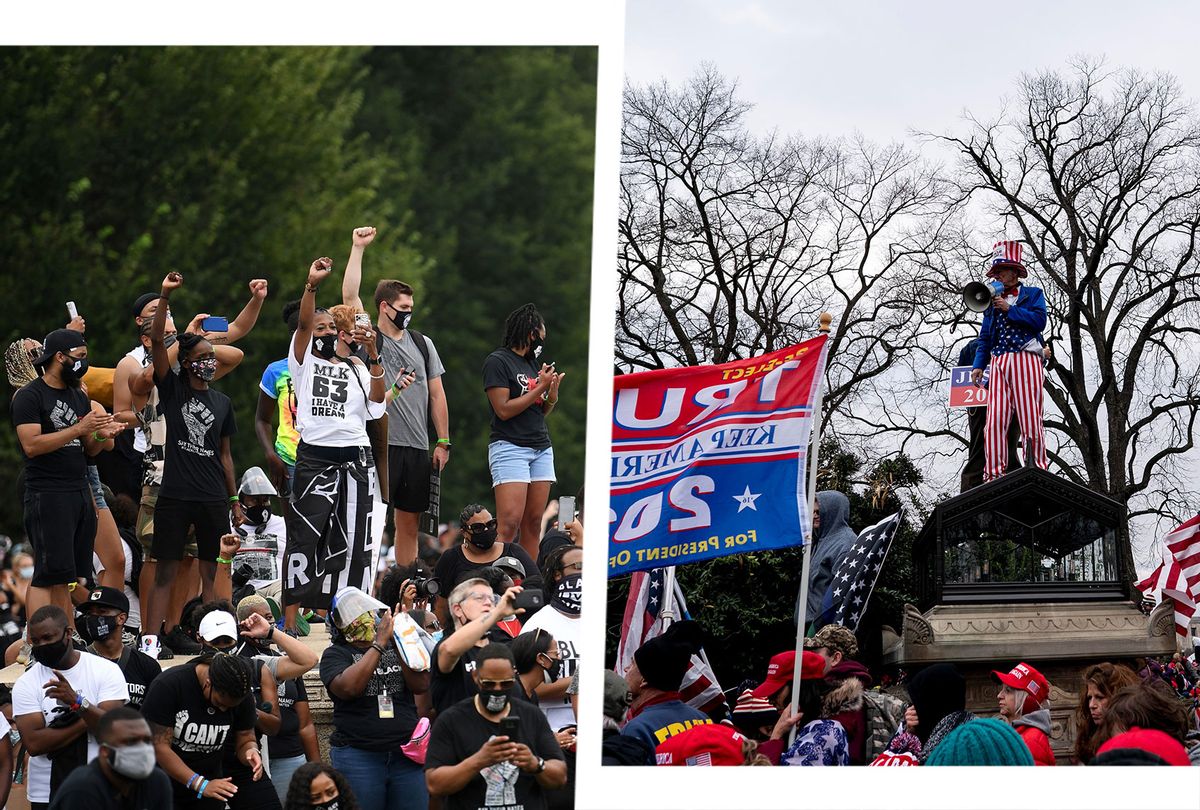 People attend the "Commitment March: Get Your Knee Off Our Necks" protest against racism and police brutality, on August 28, 2020, at the Lincoln Memorial in Washington, DC. | Supporters of U.S. President Donald Trump gather near the U.S. Capitol building in Washington, D.C., the United States, on Jan. 6, 2020. (Photo illustration by Salon/Getty Images)
--

Donald Trump never gave a direct order to hang Mike Pence. In fact, Trump didn't even come up with the specific idea of hanging, but when the insurrectionist mob he sent to the Capitol developed this idea on their own, he was only to happy to roll with it. As Rep. Liz Cheney, R-Wyo., said during the first night of hearings, Trump responded to the chants of "hang Mike Pence" by saying the rioters "had the right idea" and that Pence "deserves it."

The "hang Mike Pence" moment became the centerpiece of Thursday's hearing of the House select committee investigating the Capitol riot. The third televised probe focused on the pressure campaign Trump waged against his own vice president to overturn the results of the 2020 election. The committee revealed that, once Trump realized how close the mob he had sent to the Capitol was to Pence, he sent out a tweet to egg them on. As video footage from the riot shows, the message was received, as insurrectionists read the tweet out loud and redoubled their efforts to find and execute the man they were falsely told could steal the election for them but wouldn't.

The timeline is important for the committee's work of establishing Trump's mindset and how he very much was using the mob's violence as a weapon to pressure Pence and other power players in D.C. to give him what he wanted: illegal control over the White House. But it also underscores one of the most frustrating aspects of this entire investigation.

Social media technologies are remaking what we think of as "organizing" an event.

Trump was remarkably skilled at using public communications — speeches, and crucially tweets — to convey his wishes to his followers without coming right and giving direct orders to commit crimes. It's a strategy that works to shield Trump from legal consequences, as he can always pretend that he was "merely" criticizing Pence or "merely" promising that Jan. 6 would be "wild," and that how people reacted was all on them and not what he intended at all. It's a strategy that wouldn't work, however, without the feedback loop made possible by the internet. Trump was able to receive feedback on how his followers were receiving his communications and react in real-time by feeding more communications to them through social media.

Trumpism is very much a top-down movement, with Trump as the leader. But the way it is organized and the strategies it uses borrow heavily from leaderless movements on the left like Occupy Wall Street and Black Lives Matter, both of which have long used social media to organize on the fly, without relying on the traditional top-down decision-making models.

Social media helps facilitate decision-making by ecosystems. It can be chaotic, but it also means that activists can react swiftly to changing circumstances, instead of getting dragged down by bureaucratic decision-making. A lot of the Black Lives Matter protests were hastily assembled after George Floyd's murder by people throwing out ideas for places and times to assemble. The result sometimes was three or four protests in any given city at once. That chaos ended up being a strength. Here in Philadelphia, the protests spilled out in every direction, with marchers converging and diverging all over town, making it significantly harder for authorities to blunt the impact of the march by shepherding it to a part of town where it could be easily ignored.

An elaborate and secretive conspiracy for the insurrection itself was not necessary because Trump and his allies could communicate publicly through social media.

As Heather "Digby" Parton noted Friday at Salon, it appears that the original idea behind the Capitol riot was very different. It seems that Trump and his allies were thinking more that a violent riot — especially if it was met with resistance from the left — would give Trump a pretense to invoke the Insurrection Act and seize power with military force. But when it became clear that wasn't going to work, Trump and the mob were able to shift strategies on the fly, focusing on shutting down the electoral vote count by force. That kind of flexibility in goals and tactics is a real asset, one that leaderless movements have been using for years. Now Trump has adopted it for his fascist agenda.

While the committee has hinted that there may be evidence of direct coordination between Trump and the Proud Boys to make the Capitol insurrection happen, what is an even scarier realization is that the plan could have gone off without any such direct communication. Instead, what happened evolved the way protests and other actions have developed among Black Lives Matter, Occupy Wall Street, and other leaderless lefty movements: via online chatter.

The idea of stopping the electoral count evolved in large part through people sharing conspiracy theories and spreading documents online. Trump was just as much an audience for these conspiracy theories as he was a leader. An elaborate and secretive conspiracy for the insurrection itself was not necessary because Trump and his allies could communicate publicly through social media. The goal, the place, and the time were established through these public channels. Trump could trust that groups like the Proud Boys and Oathkeepers knew what he wanted from them, without having to say so directly. Trump was well aware that there were rising groups of right-wing thugs who wanted to commit violence. His role was more of a traffic director than traditional general giving orders. He was, in many ways, reacting as much to what his followers were signaling they wanted to do as he was telling them what to do.

Of course, when people organize a Black Lives Matter protest or an underground rave, they aren't engaging in a criminal conspiracy to overthrow the government. But it all goes to show that social media technologies are remaking what we think of as "organizing" an event. Increasingly, it's not about leaders setting an agenda, but about collective groups formulating a plan together by talking online. In most cases, that's a good thing (such as with Black Lives Matter protests) or largely harmless (underground raves). But there can be no doubt that the far-right, with Trump right in the middle, has figured out how to co-opt these same strategies.

Just last weekend, authorities arrested 31 members of Patriot Front for what appears to be a plot to attack a Pride event in Idaho. As with Jan. 6, it seems the plot evolved and formed from the swamp of online chatter. We can expect to see more violence like this, especially as January 6 really demonstrated to the larger American right the power of plugging into these online channels. Law enforcement needs to adapt quickly and find ways to prosecute people for these new-fangled methods of criminal conspiracy, or this situation will just get worse. The place to start is with Trump. Merrick Garland must charge him based on all the evidence of criminal intent developed by the January 6 committee.