"Proud Boys led a mob" in what looks a lot like a "coordinated plan" led by Donald Trump, Jan. 6 committee argues 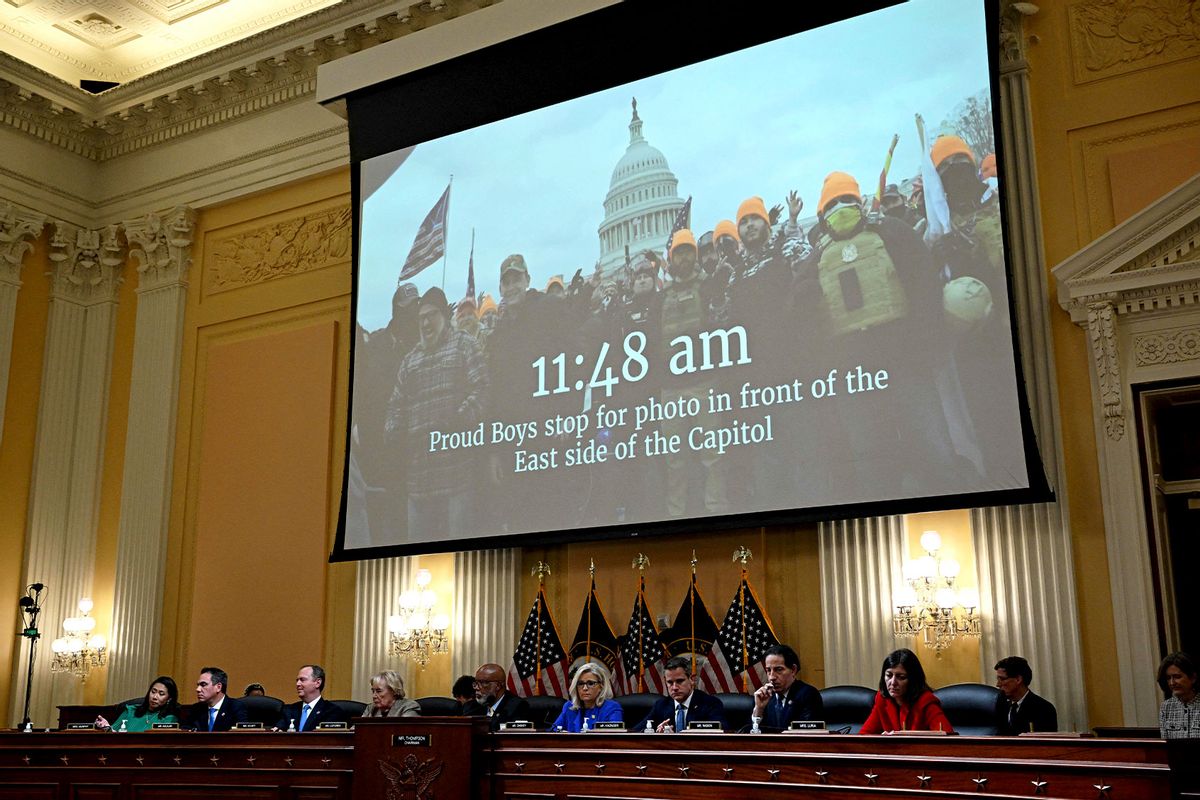 A video showing Proud Boys members appear on screen during a House Select Committee hearing to Investigate the January 6th Attack on the US Capitol, in the Cannon House Office Building on Capitol Hill in Washington, DC on June 9, 2022. (MANDEL NGAN/AFP via Getty Images)
--

Most of the media coverage of this year's first major public hearing by the House Jan. 6 committee focused on the visceral horrors of the day, and the committee's firm conviction that this was what Donald Trump wanted to happen. Certainly, the newly released video footage was wrenching, and especially when Capitol Police Officer Caroline Edwards sat quietly through footage of her own assault at the hands of rioters. The committee also laid out the case that Trump was gleeful about the insurrection and, as Rep. Liz Cheney, R-Wyo., said, told aides and associates that the rioters "were doing what they should be doing."

That case was presented in a compelling fashion, but for most people who have been following the reporting about what happened — and particularly Trump's role in it — very little of it was new. What was likely the biggest revelation of the night, however, was the central role played by the Proud Boys in the committee's narrative of the events of Jan. 6. Using footage and testimony from documentary filmmaker Nick Quested, the committee presented the case that the right-wing men's group, along with the similarly organized Oath Keepers, functioned as a vanguard that led the way for the rest of the mob, incited by Trump himself, that would storm the Capitol.

RELATED: Liz Cheney to GOP and America: Trump did it, and we're coming for him

"The attack on our Capitol was not a spontaneous riot," Cheney explained. Over the two-hour hearing, the committee laid out evidence strongly suggesting not just that these far-right groups had coordinated the attack on the Capitol, but had anticipated that Trump would send them reinforcements, in the form of the "Stop the Steal" rally-goers he implored to march on the Capitol that day.

The crux of the case comes from Quested's testimony. He had been embedded with the Proud Boys before and during the events of Jan. 6, and had witnessed them communicating with members of the Oath Keepers. Perhaps most important, Quested's experiences showed that the Proud Boys weren't primarily in Washington for the rally itself. As Quested explained, the Proud Boys didn't seem particularly interested in Trump's speech and, rather than listening to it, went to the Capitol to do "recon" — in other words, to find weak spots in the building's security.

There were only a couple of hundred Proud Boys present that day, a crucial point that committee members made sure to emphasize. That's not enough people to take the Capitol by force, especially as very few were carrying firearms. Previous reporting on Oath Keeper text messages suggests that many of the alleged conspirators were worried that carrying guns into the District of Columbia, which is illegal, could lead to their arrest before they could spark a riot. The plot to take the Capitol wouldn't have made much sense with just the manpower those two groups could marshal on their own.

But of course, they weren't on their own. They had the large crowd of people attending Trump's rally, who followed along enthusiastically and provided exactly the overwhelming numbers the Proud Boys needed to pull it off. Most of those people were clearly not in on the plan to storm the Capitol, and many of them probably hadn't even considered doing so until they were caught up in the riot.

That's why Trump's speech matters so much. The president of the United States told his followers to march on the Capitol and promised, falsely, that he would join them. Indeed, recent reporting shows that Trump may have even vaguely wanted to do so, and had floated the idea for a couple of weeks until the Secret Service said no. Who knows what the mass of people who marched on the Capitol thought was going to happen when they started moving in that direction? But by the time they got there, the Proud Boys were leading the way, breeching the barriers and setting a tone of violence and mayhem that many other people in that crowd emulated.

"What you witnessed was what a coordinated plan effort would look like," explained committee chair Bennie Thompson, D-Miss.

The implication here is hard to miss and — astonishing: The Proud Boys needed people to pull off an audacious scheme they could never have managed on their own. Trump provided those people. It's possible, although not proven, that the Proud Boys knew what Trump was going to say during the rally. It's possible they planned their actions assuming they would be joined by a crowd and angry crowd that they might be able to whip up into a violent mob. It's possible that the reason Trump was so focused on "marching" to the rally in the days leading up to Jan. 6 was because he shared this understanding.

After the hearing, Thompson appeared on CNN, where Jake Tapper asked him explicitly if we would hear from "witnesses that describe actual conversations between these extremist groups and anyone in Trump's orbit?"

"Yes," Thompson replied, though he did not elaborate on what those conversations were about.

As Peter Baker of the New York Times wrote, the committee is arguing that Trump "intentionally summoned a mob to stop the transfer of power" to Joe Biden. There's a lengthy record of public communications in which Trump makes winking references to his desire to see that happen, and at least some of his followers took that as a directive. Perhaps the most dramatic of those public communications was the Dec. 19, 2020, tweet urging supporters to come to the Jan. 6 protest, declaring it "will be wild!" As Cheney noted, Trump's adviser Steve Bannon released a podcast on Jan. 5 in which he said that "all hell is going to break loose tomorrow."

As provocative as those statements were, however, it's remains within the realm of plausibility that Trump and Bannon were hyping a more or less peaceful protest rather than deliberately inciting a riot. But if there's real evidence of coordination with the Proud Boys and the Oath Keepers, that's a very different story. The existing public evidence shows that these groups kicked off the riot deliberately, and that the rest of the crowd got swept up in the moment and joined in. What remains to be asked and answered is the question of whether that was the plan all along — and whether Donald Trump was in on it and his speech was part of the plan. In the coming weeks, we'll see how much solid evidence the committee has, and how much of this is mere implication.