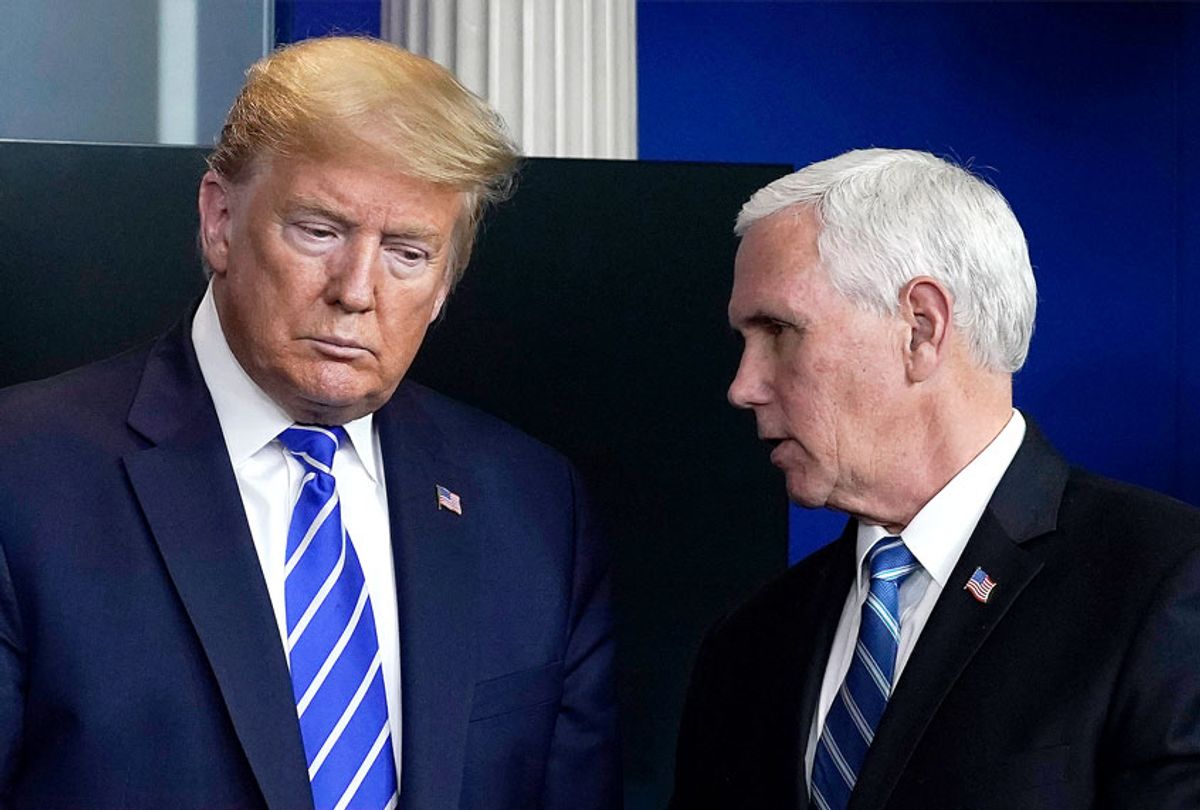 The former president argued that his supporters were righteously "very angry" when they stormed the Capitol in a fantastical bid to block Congress from certifying the election results. This came during a 90-minute interview with Karl for the latter's new book "Betrayal: The Final Act of the Trump Show," an excerpt of which was released Friday by Axios.

Karl pressed Trump on whether he was "worried" about his vice president's safety during the siege.

Karl: Because you heard those chants — that was terrible. I mean —

Trump: He could have — well, the people were very angry.

Pence was evacuated from the Senate chamber just one minute before rioters reached an entrance to the chamber and passed within 100 feet of Pence and his family, the Washington Post reported after the attack.

Trump went on to claim that half of the "top constitutional scholars" believe that Pence had the power to block the certification of President Biden's electoral victory. That is false. Although the vice president is tasked with presiding over the session in which Congress certified the electoral votes, the law governing the process explicitly bans him or her from intervening.

"Now, when I spoke to him, I really talked about all of the fraudulent things that happened during the election," Trump continued. "I didn't talk about the main point, which is the legislatures did not approve — five states. The legislatures did not approve all of those changes that made the difference between a very easy win for me in the states, or a loss that was very close, because the losses were all very close."

Several Republican-led state legislatures in states won by Biden attempted to send "alternate" slates of electors to cast votes for Trump, but did so only after the Electoral College had already met and every state had already certified its results. Trump recruited legal scholar John Eastman into his pressure campaign on Pence, asking him to write a memo detailing the vice president's supposed power to block the certification. Pence discussed the proposal with others but ultimately rejected it after he was advised, including by former Vice President Dan Quayle, that he had "zero" power to block or delay the certification, according to the account in Bob Woodward and Robert Costa's book "Peril."

Trump and his allies launched a flurry of lawsuits and investigations after the election, but never produced any evidence of voter fraud, let alone the level of widespread, enormous voter fraud that would be required to affect the results. Trump-affiliated attorneys like Rudy Giuliani, Sidney Powell and Lin Wood now face court sanctions over some of their specious claims and dubious legal filings, as well as massive defamation lawsuits from voting technology firms that became the targets of their conspiracy theories.

The House committee investigating the Jan. 6 attack has subpoenaed numerous Trump officials and allies, along with reams of documents, in its probe of Trump's role in instigating the riot. Trump has pressed his associates to stonewall the investigation and several have already defied congressional subpoenas to testify. But the committee now wants to speak with at least five members of Pence's inner circle, according to CNN, who "may be willing, voluntarily or under the guise of a 'friendly subpoena,' to provide critical information on how Trump and his allies" tried to pressure Pence to overturn the election results. A federal judge has also rejected Trump's bid to block the release of White House documents to the committee, although that the case is still pending an appeal.

Trump and Pence did not speak to each other after the Jan. 6 riot, although Karl said in a recent interview that he has seen photos of Pence "holed up in a basement" after being evacuated, including one photo that appeared to show Pence reading a tweet in which Trump attacked him.

"You can see it kind of looks like Pence is grimacing," Karl said. "But you can never really tell."

Pence said in June that he and Trump have spoken "many times" since leaving office but that they still "don't see eye to eye" on the attack. In another speech that month, Pence said he was "proud" to have certified the election results.

"The truth is, there is almost no idea more un-American than the notion that any one person could choose the American president," he said.

Despite the rift, Pence, who may hope to run for president himself in 2024, has continued to praise Trump for keeping his campaign promises and showing "what Republicans can accomplish" when their leaders "don't back down." He has also accused Democrats of using the Jan. 6 attack to "distract" attention from the Biden administration's alleged policy failures.

"The dark necromancy of Trumpism is rooted in fear ... and Mike Pence soils himself every time he hears Trump's name," Lincoln Project co-founder Rick Wilson tweeted in response to the new audio on Friday. "Even after all this."

More from Salon on Trump, Pence and the aftermath of Jan. 6: