As violence broke out on Jan. 6, Donald Trump's lawyer lashed out at Mike Pence 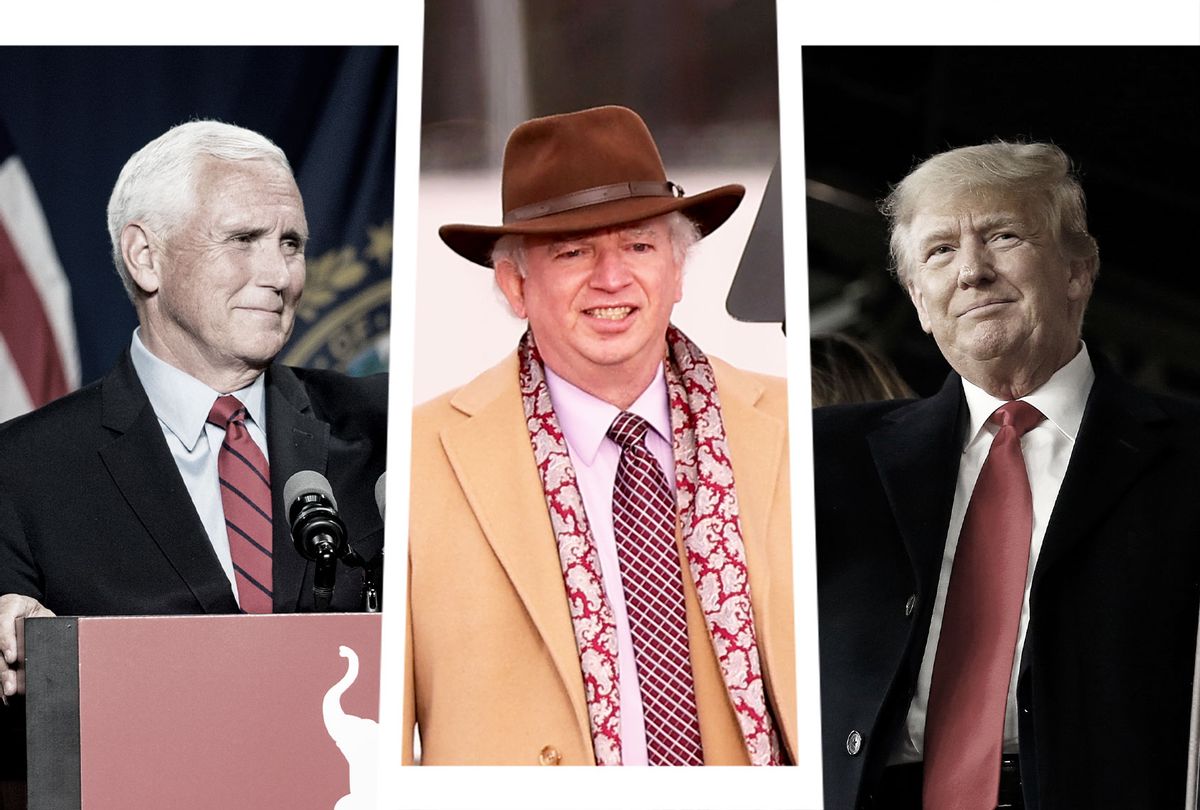 A new report reveals that, while Vice President Mike Pence hid in the bowels of the Capitol out of fear for his life on Jan. 6, President Donald Trump's lawyer castigated him for not helping the administration illegitimately stay in power. Eastman's logic was straightforward: If Pence had helped Trump pull off his coup, the angry mob assembled by the president would not have turned to violence.

"The 'siege' is because YOU and your boss did not do what was necessary to allow this to be aired in a public way so that the American people can see for themselves what happened," John Eastman, who represented Trump at the time, wrote to Pence aide Greg Jacobs, according to a report by The Washington Post. Eastman sent his email while Pence, Jacobs and many other public officials were under guard from rioters who had been egged on by Trump to "never concede," "show strength," "fight" and show "our Republicans" how to display the "pride and boldness that they need to take back our country." As the rioters laid waste to the Capitol, some called for Pence to be executed.

In an opinion article that Jacob later wrote about his experience, but chose not to publish, he observed that Eastman's email "displayed a shocking lack of awareness of how those practical implications were playing out in real time."

He also noted that Eastman and former New York City mayor Rudy Giuliani bombarded Trump's legal team with an incorrect interpretation of the Constitution in a desperate bid to overturn Joe Biden's victory in the 2020 presidential election.

"Now that the moment of immediate crisis has passed, the legal profession should dispassionately examine whether the attorneys involved should be disciplined for using their credentials to sell a stream of snake oil to the most powerful office in the world, wrapped in the guise of a lawyer's advice," Jacob wrote in his draft.

Eastman confirmed to The Post that he had sent those emails but denied that he was defending the violence, instead repeating the debunked claim that there was voter fraud. It is expected that Eastman will be subpoenaed by a House select committee investigating the Jan. 6 coup attempt, and a bipartisan group of prominent legal professionals and former government officials has asked the California bar association to investigate Eastman for passing off blatantly incorrect interpretations about the Constitution as sound legal advice.

Eastman and others in Trump's legal circle attempted to convince Pence that the 12th Amendment allows the Vice President to decide if Electoral Votes are valid; from there he offered a range of options for Pence to invalidate the election, the most extreme of which would have had him outright reject enough votes from states that went to Biden in order to declare Trump as the winner. In fact, the 12th Amendment does not empower the president to nullify electoral votes, as doing so would allow any incumbent party to thwart democracy and stay in power if it loses a national election. The Vice President's role in counting electoral votes is merely to preside over the proceedings, read the results and maintain order.

This is not the first account to chronicle how Pence, who cultivated a close relationship with Trump, fell out with the president by not supporting his coup attempt. In addition to overwhelming Pence and his advisers with a multitude of legal arguments to overturn the election, Trump also berated Pence personally on the day before the riots. According to one report, he screamed "I don't want to be your friend anymore" after Pence refused to budge on helping Trump with his coup.

Despite Trump's claims, he and his team failed to prove widespread fraud. Roughly 60 courts and 90 judges — as well as Trump's own attorney general and the entire Supreme Court — unanimously agreed that Trump did not provide any evidence of having been robbed of victory in the 2020 election. (This group included dozens of Republicans.) No case alleging significant voter fraud in the 2020 presidential election has ever been supported by any legal institution in the United States. Even more, Trump has a long history of falsely claiming to have been cheated after losing in a contest, from being snubbed at the Emmys when he hosted "The Apprentice" and accusing Ted Cruz of cheating in the 2016 Republican primaries to his spurious claims about the 2016 and 2020 general elections.

Cruz himself went to bat for Trump on the day of the riots, delivering a speech in which he urged Congress to lend credibility to the president's phony fraud claims through a commission modeled after the one following the contested 1876 election — one that helped cement the Jim Crow white supremacist governments in the South. While there had been other disputed elections in American history, Trump is the only president to flat-out refuse to leave power after being defeated. His actions were even anticipated by America's first president, George Washington, who worried that an aspiring despot would manipulate partisanship to convince supporters to end democracy so they could win.

"Cunning, ambitious, and unprincipled men," Washington warned, might one day manipulate partisan sentiments to "subvert the power of the people and to usurp for themselves the reins of government, destroying afterwards the very engines which have lifted them to unjust dominion."

In June Salon spoke with one of the survivors of Jan. 6, Rep. Eric Swalwell, D-Calif., about his memories of that day.

"I was on the floor and there are not many windows or vantage points outside the chamber," Swalwell recalled of that day. "I'll never forget the uncertainty and terror of knowing there was a violent mob seeking to stop us from doing what we were doing, who were chanting that they wanted to kill members of Congress and that they were armed in a variety of different ways." When pipe bombs were discovered, he texted his wife and asking her to kiss their young children.

"It was traumatizing," Swalwell told Salon. "There was the duality of not just being a witness but of having a job to do and just being so angry that we had to leave."