George Washington predicted Donald Trump: Why doesn't everyone know this?

If Republicans really want to Make America Great Again, they need to listen to Washington – and dump Trump 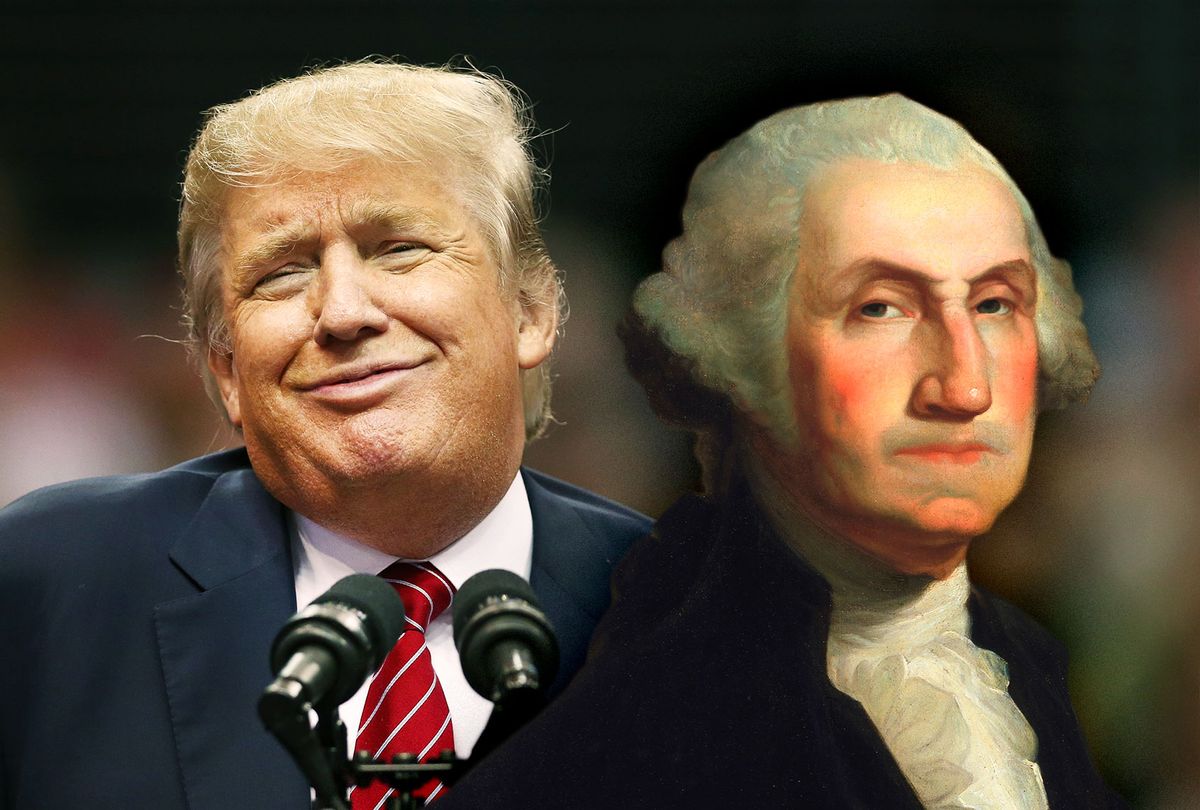 As my colleague Amanda Marcotte frequently points out, conservative ideology these days seems to boil down to little more than "owning the libs." If you manage to achieve "triggering a lib," maybe you get imaginary bonus points — perhaps the Star Theme from Super Mario Bros. plays in your head.

Well, I think it's time for liberals to return the favor. We should repeatedly bring up the fact that America's most important founding father, George Washington, warned us about the rise of Donald Trump.

No, he didn't know the man's name, of course — he wasn't a time traveler or a clairvoyant — but he described Trump's personality and actions in detail. Washington was president as the United States prepared to hold its first contested presidential election — he was elected twice without opposition — and wanted to make sure it would run smoothly. More than that, he wanted to make sure all future elections ran smoothly. So in his famous Farewell Address, he outlined what an enemy of this democratic process might look like. The speech was published during the 1796 election between John Adams and Thomas Jefferson, the two great rivals of early American politics.

The most relevant section of the document (most of which reads as fairly antiquated today) is pretty much a giant spoiler alert for everything Trump did to undermine the results of the 2020 election, an effort that began long before a single ballot had been cast. When you get right down to it, one of the likeliest ways for American democracy to reach its breaking point would be if a presidential candidate refused to accept the will of the people. More than two centuries before that happened, Washington foresaw exactly how it would go down.

Although the ideas were entirely Washington's the address was largely written by Alexander Hamilton. At one point, the man on the one dollar bill warns that partisanship could lead to the rise of a dictator. Decrying the "baneful effects of the spirit of party generally," he argued that if partisanship reaches a fever pitch, it could "gradually incline the minds of men to seek security and repose in the absolute power of an individual."

Washington also warned that hyper-partisanship "opens the door to foreign influence and corruption, which finds a facilitated access to the government itself through the channels of party passions." He was worried that these factors could facilitate the rise of "cunning, ambitious, and unprincipled men" who would manipulate partisan anger to "subvert the power of the people and to usurp for themselves the reins of government, destroying afterwards the very engines which have lifted them to unjust dominion."

Does any of that sound familiar? Trump has close and somewhat mysterious ties to Vladimir Putin's government, and former special counsel Robert Mueller's report demonstrated that his campaign worked with individuals connected to Russia during the 2016 presidential election. When Trump abused his power in an effort to pressure Ukraine into opening an investigation into Joe Biden, Senate Republicans — intimidated by a voter base that, intoxicated by "the baneful effects of the spirit of party," had come to value defeating Democrats over everything else — rigged his impeachment trial so that partisanship would prevail over justice.

Then Republicans did it again when, after years of conditioning his supporters to believe that any election he loses has been stolen, he became the first defeated president to refuse to accept his loss — and led an insurrection attempt as a result. (After John Tyler, who sided with the Confederacy during the Civil War, Trump became the second president to indisputably betray the Constitution.) Now Republicans have allowed Trump to transform the party in his image, not caring that he put many of their own lives in danger. They are using a Big Lie to erode democracy.

And what did Washington think the climax of all of this hyper-partisanship — as manifested in the above "hypothetical" examples — would be?

The disorders and miseries which result gradually incline the minds of men to seek security and repose in the absolute power of an individual; and sooner or later the chief of some prevailing faction, more able or more fortunate than his competitors, turns this disposition to the purposes of his own elevation, on the ruins of public liberty.

Trump is, to a T, what the Father of His Country predicted. Opponents of Trump, Trumpers and Trumpism need to bring this up waaaaaaay more often.

For what it's worth, I was tempted to bring up two other relevant sections of Washington's Farewell Address. One, which pertains to foreign policy, prophesied the rise of American imperialism and is interesting for that reason, but isn't directly relevant here. The other, which denounces "all obstructions to the execution of the laws, all combinations and associations, under whatever plausible character with the real design to direct, control, counteract, or awe the regular deliberation and action of the constituted authorities," I simply don't support. True, that suggests Washington would clearly have disapproved of the Jan. 6 rioters and their defenders, but not necessarily for the right reason. The problem with the Capitol attack, at its core, is that it was a battle for a baseless and unjust cause. If the rioters had been fighting for human rights rather than fascism — like the civil rights protests of the 1960s, or at least a cause better than shared omnipotence with a malignant narcissist — their actions might have been theoretically defensible.

In any case, those who fight for democracy today should embrace Washington's Farewell Address. We don't need to pretend that Washington was an impeccable and virtuous hero, or look past his numerous flaws. But he wasn't wrong about democracy. His greatest achievement was not defeating the British in the Revolutionary War. It was leaving office in 1797 and handing the reins to Adams, his elected successor — establishing a precedent that Adams knew he had to follow four years later, when he lost his rematch with Jefferson in the bitterly contested election of 1800. It was the precedent that every president followed until Trump lost to Biden in 2020. Washington showed that democratic government could function, for the first time in modern history, because the nation's leaders would respect the will of the people.

I once attended a reenactment of Adams' inauguration as part of my journey covering Barack Obama's second inauguration for Mic (then PolicyMic) in 2013. When the tour guide read from a contemporary account describing the tension in the room as people wondered whether Washington's troops would arrest Adams so the first president could stay in power, it felt like a bizarre account from ancient history. Only eight years later, the very people who would claim to venerate Washington's footsteps have made that 1797 report seem like this week's headlines.

Washington stepping down from power was the first thing that made America great. If Republicans really want to Make America Great Again, they need to heed Washington's message — and dump the "cunning, ambitious and unprincipled man" on whose behalf they seem willing to destroy democracy.