A historian from the future looks back: What will be most remembered of Trump's presidency? 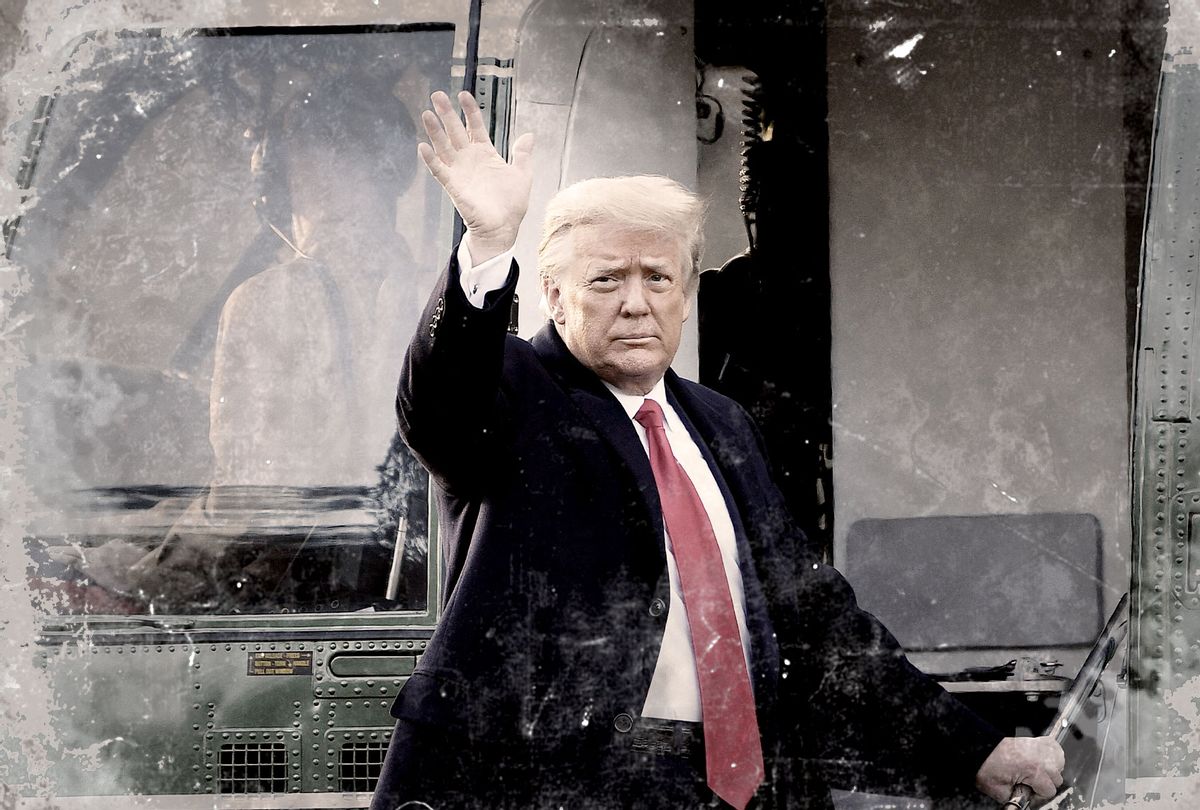 How will historians remember Donald Trump?

One hundred years ago, America nearly slipped into a dictatorship. The nation was saved primarily by two things: The fact that the man who wished to be its fascist dictator, President Donald Trump, was too stupid to realize how to correctly respond to a worldwide plague, and the fact that he was a physical coward.

The first fact was by far the most important. When the COVID-19 pandemic began to ravage humanity in 2020, Trump responded in the worst ways possible: He downplayed the threat despite knowing that it was a deadly and contagious disease, defunded and sidelined agencies and individuals with the scientific expertise to contain the pandemic and failed to coordinate a coherent and effective federal response. He also promoted pseudoscience to his supporters, kept trying to prematurely reopen the economy and set a bad example by personally refusing to wear a mask, inevitably catching the disease himself. Although he was wealthy and powerful enough to receive the medical care necessary to survive to the end of his presidency, more than 400,000 Americans had died of COVID-19 by the end of his term because of his poor leadership... roughly the same number as died during World War II. This meant that Americans comprised roughly 20 percent of the total worldwide COVID-19 deaths, even though the United States had just four percent of the world's population.

Despite these serious mistakes, Trump won 74 million votes in the 2020 election, the second-highest total ever received by a presidential candidate up to that point. This is because Trump, like many fascist leaders, had developed a cult-like following among a large segment of the population. Given how well he performed despite his failure to handle the pandemic — a failure that, in turn, caused America's worst economic setback since the Great Depression — it is probable that he would have won if he had simply handled the pandemic better. Incumbent parties tend to win or lose based on public perceptions of whether they are doing a good job, and future President Joe Biden was not viewed as an inspiring candidate. (Biden's main appeal was his association with a popular former president, Barack Obama, under whom he had served as vice president.) If Trump had mounted an effective federal response to the pandemic and urged the public to follow medical experts' advice, that combined with his base's enthusiasm and a lack of voter enthusiasm for Biden most likely would have resulted in his reelection.

But Trump bungled it. As a result, Biden won the election with 81 million votes and an electoral college margin of 306 to 232. Trump's failure as a leader doomed his dictatorial ambitions, humiliated his supporters and saved American democracy from himself.

These are the most important facts of Trump's presidency. His entire administration prior to the pandemic was merely a prologue to those defining moments.

During the 2016 election he openly called on Russia to help him defeat Democratic nominee Hillary Clinton, and Russia did indeed meddle in that contest. Although Trump's upset victory over Clinton was not caused by Russian interference, his willingness to work with a hostile foreign power to be elected foreshadowed his dictatorial ambitions. After taking office, Trump expressed open sympathy for white nationalist rioters in Charlottesville, Va., repeatedly praised authoritarian rulers and used fascist rhetoric that subtly urged his followers to support him as an undemocratic ruler. In 2019 he tried to coerce Ukraine into helping him smear Biden, who he accurately perceived was likely to be his opponent in the 2020 election, and became the third president to ever be impeached as a result. Although there was no reasonable doubt as to his guilt, the Senate was controlled by Trump's fellow Republicans, who voted on party lines (with the exception of Sen. Mitt Romney of Utah) to acquit him.

Trump's efforts to become a dictator only increased after that. He violated the First Amendment by moving to punish Twitter after the social media company fact-checked him, tried to kneecap the Post Office so that people who voted by mail (who, due to the pandemic, were more likely to be anti-Trump) would be less likely to have their votes counted and insinuated that if re-elected he would seek 12 more years in office, even though the Constitution only allowed him four. He also repeatedly refused to say whether he would accept the voters' verdict if he lost in the 2020 election (he also did this in 2016), conditioning his supporters to believe that the only possible outcomes were either that Trump would win or that the election would be illegitimate. Ominously he told a white supremacist and misogynist group known as the Proud Boys to "stand by" during one of his presidential debates; Trump adviser Roger Stone was notoriously connected to the violent group, and they played an outsize role in Trump's eventual coup attempt.

After he lost — and perhaps emboldened by his impeachment acquittal — Trump did everything in his power to stay in office. He filed five dozen frivolous lawsuits, had his attorney general, William Barr, launch an investigation into the supposedly "stolen" election and repeatedly lied to his supporters by saying that there had been widespread fraud. (He never actually alleged fraud in more than two-thirds of his lawsuits.) All of the investigations into fraud, from those filed in court to the one overseen by his own attorney general (who was notoriously obsequious throughout Trump's presidency), concluded that Biden had legitimately won. All but one of Trump's lawsuits failed (the exception involved a minor procedural issue in Pennsylvania), with many of the judges who sided against him being fellow Republicans, some appointed by Trump himself. The Supreme Court, though refusing to hear his case, made it clear that if it had it would have unanimously ruled against Trump; three of those judges had been appointed by Trump himself. The president's fraud claims were debunked by experts and his efforts to pressure Republican officials in swing states that he had lost into somehow letting him win anyway did not succeed.

After that, Trump did something unprecedented: He tried to foment a violent coup.

Although ten sitting presidents before Trump had sought another term and been spurned by the voters, Trump was the first to try to use violence to illegally stay in office. At a rally on Jan. 6, 2021, he infamously urged a mob of far right extremists to storm the Capitol and force Congress to not certify Biden's victory. The coup attempt was ultimately thwarted, but not before thousands of people swarmed the building, breaking and stealing property, threatening legislators and even killing a law enforcement official.

And that is what they did without Trump personally leading them. If he had been willing to physically join the Capitol rioters, perhaps the police — who were already shockingly restrained in their efforts to stop the rioters, even though American police were notoriously brutal toward left-wing political movements and marginalized racial groups — would have allowed them to do whatever they wanted. It is possible that anti-Trump legislators in the Capitol would actually have been physically intimidated or murdered. At that point, Trump could have literally realized his coup.

Fortunately for democracy, Trump did not join the rioters, despite telling them that "we are going to the Capitol" to give Republicans like his own vice president, Mike Pence, "the kind of pride and boldness that they need to take back our country." (Pence was overseeing the vote certification but had no power to throw out any of the votes, although Trump erroneously insisted otherwise.) Trump instead retreated to the White House. He left his supporters — having been told that they could force Congress to overturn the election results, with his blessing — to attempt their insurrection while he was safe at home.

This is why Trump's physical cowardice, along with his failure to address the pandemic, was the other major factor that saved democracy. It is why his term ended with him being the first president to be impeached twice, slinking off in disgrace, rather than a dictator who literally led a charge that physically overthrew anyone who might keep him out of power.

Trump was a terrible president in many other ways, but they were not unprecedented. He ignored how climate change was threatening human civilization, but so did most of the other Republicans who ran for president in 2016, as well as the previous Republican president, George W. Bush. He refused to work with the incoming Biden administration on important issues like the pandemic and economic downturn, but President James Buchanan had infamously refused to work with President-elect Abraham Lincoln to stave off a Civil War. He passed a $1.5 trillion tax cut for the wealthy that did nothing to help the working class, but other Republican presidents had also favored those types of economic policies.

He failed to deliver on the promises of his campaign and inaugural address, particularly when it came to revamping America's infrastructure and building a wall along the entire US-Mexico border, but many other presidents have also come up short in fulfilling their agendas. He brutalized undocumented immigrants, but America has a long history of viciously racist anti-immigration policies. He stuffed America's courts with conservative judges, but this was merely the fulfillment of an agenda that had begun when Republican Senate Majority Leader Mitch McConnell obstructed President Obama's judicial appointments, most notably of Merrick Garland to the Supreme Court. He had numerous financial conflicts of interest and enriched himself through his office, but corruption is hardly new to American politics.

If it had not been for his attempts to become a dictator, Trump would simply be remembered as just another in a line of terrible Republican presidents — one of the worst, to be sure, but not necessarily a shoo-in for the absolute worst. His only distinctive quality would have been that he was the first president to be elected without previous political or military service.

Instead, on the centennial anniversary of the end of Trump's presidency, we hold him up as a reminder that democracy is a fragile thing. Terrible presidents come and go, wreaking havoc in the process, but potential dictators are a rare thing on the American scene. The only reason this nation is still free, 100 years later, is because its would-be dictator was outsmarted by a virus and too scared to risk his own life despite demanding that others do so for him.