Trump spent just ten minutes at a U.N. summit meant to serve as a "slingshot" toward combating the climate crisis 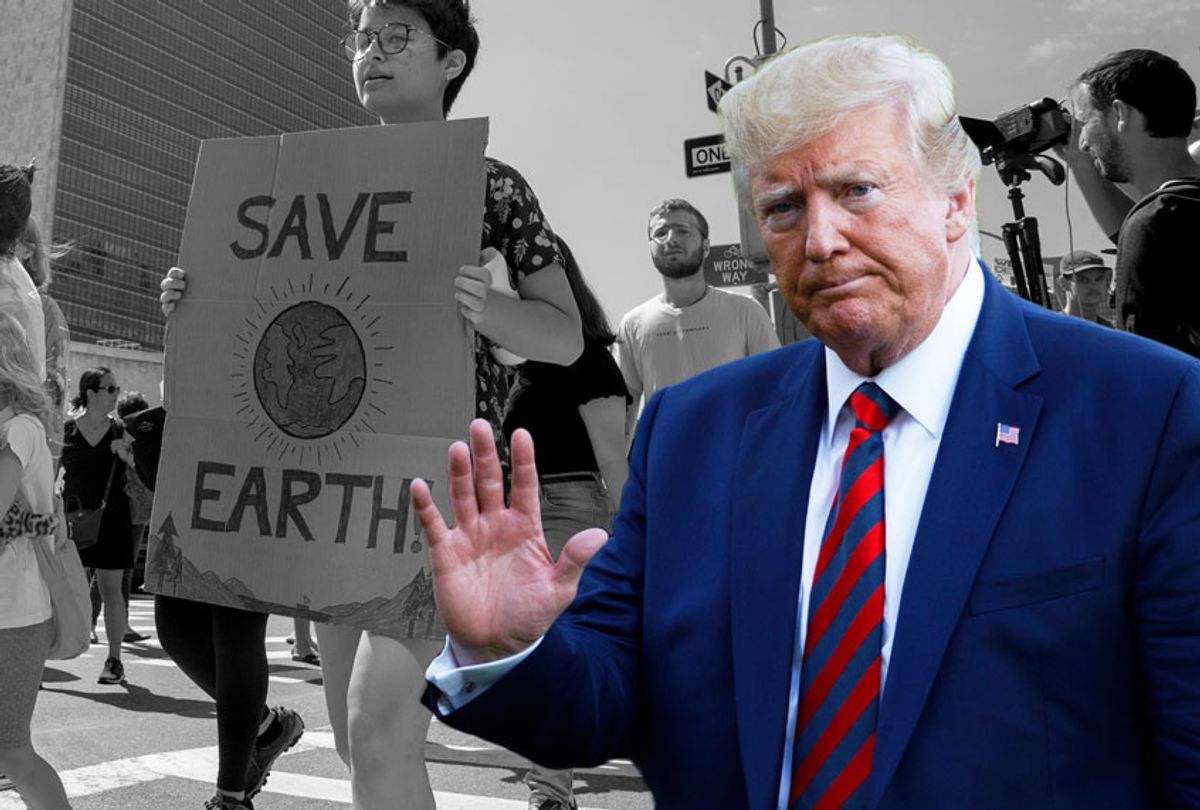 After it was initially signaled that Trump would not attend the climate hearings at the U.N. General Assembly, the president went on to appear for 10 minutes alongside Vice President Mike Pence and U.N. Ambassador Kelly Craft before leaving to address a meeting on the persecution of religious minorities, according to CBS News. Despite his appearance, there is no indication that Trump is willing to recant his past denials of man-made climate change.

The Trump administration has pursued an aggressive anti-environmental agenda since Day One. This has included pulling America out of the Paris climate accord, purging all information about climate change from the Environmental Protection Agency's website, ordering parts of the government to stop studying how climate change will impact the planet's future and claiming that "the concept of global warming was created by and for the Chinese in order to make U.S. manufacturing non-competitive."

"Trump is an embarrassment for the United States, and it is shameful that our political process is acting as his facilitator," Ken Caldeira, an atmospheric scientist at the Carnegie Institution for Science's Department of Global Ecology, told Salon after Trump's U.N. appearance Monday. "Trump's refusal to meaningfully participate in international efforts to reduce greenhouse gas emissions augments our national shame."

Given Trump's well-known opposition to combating the climate crisis, Caldeira said that president's brief participation should have come as no surprise.

"While it is nice that he managed to spend as much time sitting in the U.N. General Assembly, apparently, as his attention span would allow, following the U.S. withdrawal from the Paris Agreement, nobody was expecting anything better," Caldeira said of Trump. "Nobody has expectations that the Trump administration will try to do anything other than undermine past accomplishments and hamstring future progress."

Another top climate scientist also told that Trump was an embarrassment, calling attention to the fact that ten minutes does not afford the president enough time to "listen to others."

"Yes, it is an embarrassment for the U.S.," Kevin Trenberth, a distinguished senior scientist in the Climate Analysis Section at the National Center for Atmospheric Research, told Salon by email. "The planet's ability to fight climate change requires U.S. leadership, which has gone in entirely the wrong direction. The U.S. has moral and ethical responsibilities, because it is the biggest contributor over time to the problem. And it is the only nation capable of leading and bringing everyone else along. There are numerous examples of this in the U.N., for instance. In this case, the U.S., with Europe and China, could change the whole problem and start us on a solution."

Michael E. Mann, a distinguished professor of atmospheric science at Penn State University, said the U.N. summit was "better off without Trump."

"Any true climate solutions will have to go around him and almost certainly involve defeating him in the next election," Mann told Salon. "Trump is the greatest impediment to climate action in the world right now. The U.N. should not legitimize him by inviting him in the first place."