We ran from police, even when we were innocent. White people freely walk towards cops even while committing crimes 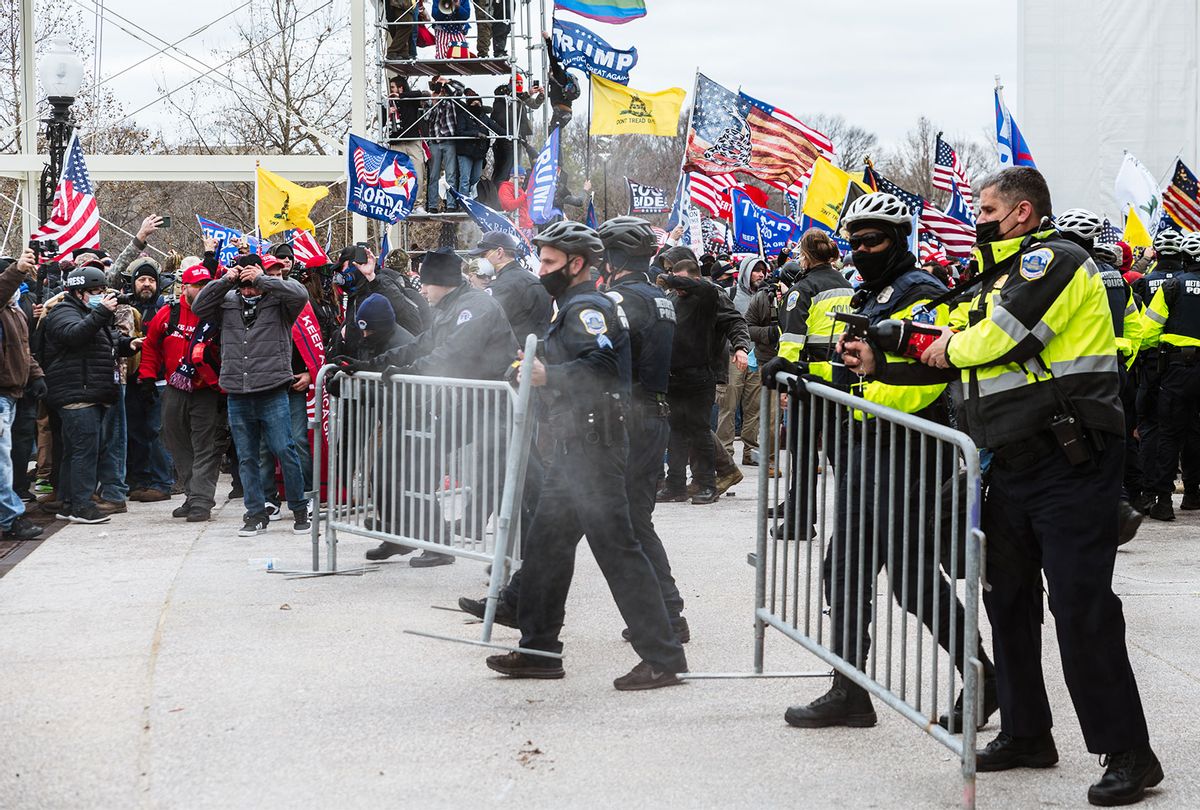 A large group of pro-Trump protesters face off against police with pepper spray after protesters storm the grounds of the Capitol Building on January 6, 2021 in Washington, DC. A pro-Trump mob stormed the Capitol, breaking windows and clashing with police officers. Trump supporters gathered in the nation's capital today to protest the ratification of President-elect Joe Biden's Electoral College victory over President Trump in the 2020 election. (Jon Cherry/Getty Images)
--

I'm amazed. More than a week after the Coup Klux Klan-styled failed insurrection, and I'm still amazed. Thousands of disgruntled rioters, an overwhelmingly white crowd dripping in Trump swag and waving Trump flags, shown pushing their way into the Capitol building, looting, stealing, vandalizing and just acting like complete maniacs, as many police officers just watched. Some even posed for selfies with the mob. We still don't know why the Capitol was allowed to be that vulnerable. I couldn't imagine the scene if I hadn't seen the photos and videos taken at the Capitol on January 6.

When I was a preteen and teenager in the '90s, I'd pile up on our Baltimore corner 30-40 deep with other kids — loud, ashy, quiet, smooth, fast, slow, happy, young, free — to talk sports and sneakers and crushes and dreams. Our corner was a place of and for dreams. Maybe because it was one of the few places where we could truly cut loose without our parents or older siblings pushing us in whatever direction they wanted us to go, or maybe because our classrooms worked so hard to beat the dreams up out of us. Either way, our concrete post was home. It was what some might call our "safe space." A safe space, that is, all the way up until the cops rushed us.

The truth is, the law broke us before any of us ever broke the law. The bulk of my friends weren't 10-year-old automatic weapon-waving super predators the crack era authorities told white people to fear. Crack dealers were around, but we had our own world of rec ball, amusement parks, skateboards, dirt bikes, Freezy Pops, Now Laters, Hutch trick bikes, frozen cups, games of catch one catch all and hide and go seek. This world of youthful bliss started on the corner and ended there as soon as the cops rushed.

Rushes for me started when I was around five years old and lasted well into my thirties. Not surprisingly, they didn't evolve much over that time. Here's how it would work. You gather a group of Black teens on a corner like mine. Make sure they're dressed in their nice clothes, laughing and having fun. Any time between 6 and 11 p.m. is a good time to invade. It's not strange to see one cop car pull up and orchestrate the whole movement; however, these incidents normally involve about three cars full of both uniformed and plainclothes cops — or what we called the knockers or jump out boys. The cars would flood the corner from multiple directions. They would pull up on the curb, blocking traffic and leaping out at the same time, service batons twirling and, at times, guns drawn.

When we saw those cars, we ran. We didn't think, we didn't look back, we just ran up or down the block, through alleys, into houses, across the park, pointed in any direction opposite of the police who infiltrated our space.

No one sat me down as a little kid and told me to always run when the jump out boys come. I learned from watching older dudes, seeing them shoot off even after the cops yelled, "freeze!" I learned even more from watching the guys who were caught. Running from the cops who jammed the corner could get you a number of things: arrested for whatever reason, drugs planted on you — enough to send you to kiddie jail — or even worse, beaten. Police officers loved to jump out on kids and beat them senseless, especially if they led them on a chase. So I learned that if you run, don't get caught.

From as young as five years old, I saw cops crack innocent kids. I heard bones break and jaws shatter; I saw grandmas in house coats and worn slippers run out of their houses screaming "that's my baby!" as their grandkids were dragged away, and mamas crying too; I saw black eyes, welts, scars; I saw parties broken up, weekends and summers ruined.

Now, cops didn't always beat on us during these rushes. Sometimes they were doing actual police work — looking for a guy who did a shooting or a robbery or something. They wouldn't pull up like maniacs then. They'd drive by slowly, then park, get out calmly and ask us if we'd seen so and so. But even when they pulled up slowly, peacefully, we still looked away. We didn't want to talk. We still wanted to run. Because we just knew that something bad was going to happen.

Too many Black people are trained to see police and want to run. Our trauma from dealing with law enforcement is the result of our collective horrific experiences. And to watch the contrast of how some of the police officers present interacted with white supremacists at the Capitol riot, to see those clips playing on loops on every news station over the last week and a half, has been simply amazing.

"It's like the cops ain't even standing there!" my friend yelled to me on a phone call. "Are you watching this!"

"You know, bro," I laughed, after waiting for him to calm down. "We were raised to think and feel like police are against us. Those Trump rioters were raised to think that all police officers work for them. That's the difference. That's why they can rip, run and loot in the Capitol building right in front of the cops."

"When Freddie Gray was killed," he responded, "a cop car burned and a few buildings were tossed, but nobody died but Freddie."

After Freddie Gray, a 25-year-old unarmed man killed by Baltimore city police officers, died, a CVS burned and we had tanks rolling past those corner we used to hang on. Babyfaced soldiers from the National Guard were deployed to Baltimore and given leg-length rifles with the aim of making sure that no more CVS stores or major chains were damaged. Despite the small amount of property damage that occurred, the bulk of the demonstrations in Baltimore were peaceful and nonviolent, full of people singing, locking arms, praying, passing out bottles of water and hugs, too many hugs. No insurrections, no cops killed, no violence directed at public officials. But we were Black in a Black city, so we got tanks and soldiers armed to the teeth. I'm not amazed by that. The data shows U.S. police are three times more likely to use force against left-wing protesters than on right-wing demonstrators, and yet we see Trump supporters going crazy over chants for "law and order" and "Blue Lives Matter" while at the same time they feel empowered to fight the police, leaving Capitol Police officer Brian D. Sicknick dead from the brawl.

I'm not amazed that the so-called QAnon Shaman, Jake Angeli, one of the infamous faces of that day who was recently arrested, refused to eat in jail until he was served organic food, per the judge's orders, because white supremacy has taught me that the needs and wants of white men always matter. Who knew jail had organic menus? White men knew. The organic food accommodations don't amaze me because they happened in the same country's criminal justice system that purchased a cheeseburger for Dylan Roof after he walked into a church and brutally murdered nine praying Black Christians after Bible study.

This is the America we live in.

More of the people who stormed into the Capitol and walked away free are now being identified and arrested after the fact, which means the system is at least responding to white craziness. That alone is amazing to me. It's also a step in the right direction. If the same system can stop unfairly and disproportionately targeting Black people — including kids like my friends and me, dreaming and playing peacefully on the corners of our cities — maybe we will finally start to get somewhere.