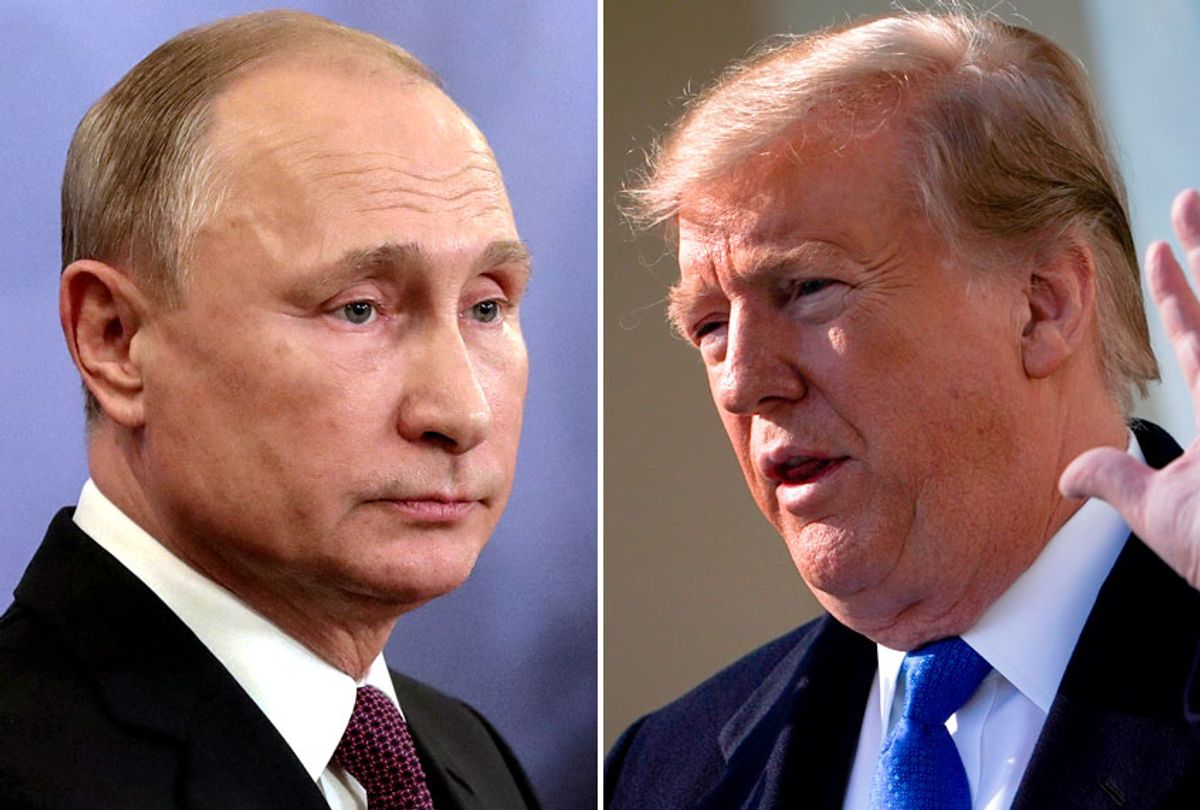 Remember when President Trump admitted that Russia had meddled in the 2016 presidential election?

That was less than two weeks ago, but our news cycle moves at such a brisk clip it's easy to forget. There is no denying that on May 30, the same president who has repeatedly denied or downplayed Russia's interference in American elections tweeted that "I had nothing to do with Russia helping me to get elected." While Trump apparently thought he was defending himself with that remark — and later retracted it once he realized how it came across — it sure sounded like Trump admitting that Russian meddling happened and conceding that he benefited from it, even if only through a Freudian slip.

Whether Trump likes it or not, his presidency is inextricably linked to his unusual relationship with the Russian government. To learn more about how the Trump-Russia relationship has changed history, Salon reached out to Michael McFaul, a foreign policy adviser to President Barack Obama who served as U.S. ambassador to Russia from 2012 to 2014. McFaul was also briefly in the news after the Helsinki summit last year. When Russian President Vladimir Putin asked Trump to hand over McFaul for questioning on a variety of trumped-up charges, the president reportedly considered doing so. If Trump had the kind of unchecked power he wishes he did, McFaul's life might have been in danger.

Then he continues: "It was a crime that didn’t exist. So now the Dems and their partner, the Fake News Media, say he fought back against this phony crime that didn’t exist, this horrendous false acquisition, and he shouldn’t fight back, he should just sit back and take it. Could this be Obstruction? No, Mueller didn’t find Obstruction either. Presidential Harassment!"

There's a lot to unpack there. Did the president just acknowledge that Russia helped him get elected?

Well, that's obviously what the sentence implies, and my assumption is also that that's not what the president intended to mean, because he frequently makes those kind of mistakes. I'll wait for the correction, but, I mean, it's important and telling that for the first time he is acknowledging that there was influence by the Russians designed to help him win. That at least is a tiny step toward getting away from the other language in that tweet, which is this "hoax, hoax, hoax" thing.

What has been a problem from the very beginning, and continues with the use of that word, is that the president conflates the investigation into conspiracy and obstruction with the investigation into what Russia did. I'm not an expert on these legalities, others are smarter than me to talk about what is in the report and what is not. But remember, you can do bad things, and things that are wrong, even if they may be legal.

By conflating those things, he doesn't allow us to have a conversation about the national security threat that Russia already demonstrated in 2016 and has the capacity to do again. I think that's a big mistake, and the president continues to contribute to that.

Here is why I find this period in American history to be so ironic, and I've touched on this before:  We have a Republican president who is the one that shows legitimate signs of having been compromised, And it's not a polemical charge but a valid concern. Do you see that as well?

That Trump has been compromised by the Russians, you mean? I don't know. I honestly don't. I've read the Mueller report. I see circumstantial evidence, but I would not — I'm not comfortable saying that the president is compromised by the Russians, that he's acting on their behalf because of some leverage that they have on him. That part, to me, actually deserves more attention. I was surprised by the relatively thin treatment of business contacts between the Trump Organization and people around him and Russian individuals. I expected there would be a greater exploration of that.

So I don't know on that front. What I do know is that things that the president says serves Russia's national interest, as defined by Putin. I want to be very clear about that: as defined by Putin. Other Russians have a different definition of the national interest. When the president, for instance, refuses to acknowledge that we were attacked in 2016, as he's done repeatedly for years now, that serves Putin's interest, not America's national interest. When he does so standing next to President Putin at a press conference in Helsinki, and when tossed up what should have been a softball question to say he supports his intelligence community, and he chooses not to, in my view that serves Putin's interests. That does not serve America's national interest.

That raises the question , "Why is the president consistently siding with Putin on issues where I think it's not in America's national interest?" And I think that deserves further examination.

What about the context of Trump's admiration for and cozy relationships with other dictators? Look at his relationships with Crown Prince Mohammed bin Salman, Kim Jong-un in North Korea, Rodrigo Duterte in the Philippines. Those are all people with whom he has, in various ways, had these kinds of relationships. Maybe he's just a sucker for flattery.

Well, that consistent pattern undermines the hypothesis that he's compromised by Russia. Because that means he has to be compromised by all those people, and that for me suggests that there's a deeper pattern here. It doesn't make me feel any better about it. I want to be clear about that. But I do think President Trump has demonstrated that he has a theory about diplomacy — that is, if he says nice things about these dictators that's going to make them feel better about him and, by implication, that's going to be good for the United States.

I would say so far the tangible, concrete outcomes that are good for America — good for our security interests, good for our prosperity — of that strategy is very thin. It just hasn't resulted in things that make us better off. With Russia, it's most certainly clear that happy talk with Putin hasn't gotten him to leave eastern Ukraine, hasn't got him to back away from [Syrian President] Assad, hasn't got him to rethink the annexation of Crimea. There's been none of that, right?

And I would say the same thing about many of those other leaders you just described. I don't know what we're getting out of our embrace of those people that is good for Americans. After all, that's the job of the commander in chief. That's the job of the president of the United States, is to advance American national interests, not somehow have these people have friendly personal relationships with him.

Now I think about the Helsinki Summit and the fact that Donald Trump reportedly considered turning an American diplomat over to a hostile foreign power, that diplomat of course being you. Could you see any president before Trump doing that? Democrat, Republican, liberal, conservative?

No. No. He's unique in that way. He's also unique in many ways. He's unique in the way that he talks about Putin. Nobody, not even anybody in his own administration by the way, talks in such glowing terms about Vladimir Putin as President Trump does. Conversely, the president goes out of his way to offend people that used to be our allies, which I can't remember anybody ever doing.

I also can't remember somebody being so offensive to U.S. officials while traveling abroad as he did. The way that he referred to Vice President Biden, in such undignified terms while on foreign soil, in effect siding with the dictator of North Korea in those disparaging remarks. He has a unique way of practicing diplomacy, for sure.

What are the potential long-term consequences in terms of bilateral relations between America and Russia?

Well, so far I would say very little, because I think the basic Trump administration policy toward Russia has been pretty sound. They don't like it when I say this, and Obama folks don't like it when I say this, but I see more continuity in actual policy between Obama and Trump than this continuity with respect to Russia. Not in terms of language, but in terms of actual things. Right?

Sanctions are still in place. That's the right strategy, in my view. NATO is strengthened and has deployed forces closer to the Russian border. That's good news, in my view. Support for Ukraine, economic political reform and military assistance, has continued. I give the Trump Administration credit in providing lethal [military] assistance [to Ukraine]. That's an improvement.

So far, the contours I think are more or less the same. What I worry about, of course, is that as the president gains more confidence in his practice of diplomacy that he might disrupt that and might begin to move in different directions. The area I'm most concerned about right now is with respect to Ukraine.

I am alarmed that the president's personal lawyer [Rudy Giuliani] has been politicizing U.S.-Ukrainian relations and making claims that there are enemies of Trump in the orbit of the new president in Ukraine, Volodymyr Zelensky. That doesn't help U.S.-Ukrainian relations, in my view, and I hope that it's just Giuliani expressing his personal views and does not reflect a policy change from President Trump or the administration. But it makes me nervous.

I'm really asking you this more as a historian than as a policy analyst. It seems like after the Cold War, there was a period when America did not consider Russia to be a serious national security threat. Do you think the events of the 2016 election have been a game-changer in terms of our perception of Russia?

Well, I definitely agree analytically that we misperceived the potential threat from Russia for a long time. In fact, I wrote an academic article back in 2006 making exactly that argument, that we were asleep here. We weren't realizing the potential, both the capacity and the intention to do harm from Vladimir Putin's government. Both of those things have increased since 2006, markedly and appreciably. The capacity to influence events around the world as far away as Venezuela, but also the intention — and I would say even the risky behavior — that Vladimir Putin has demonstrated.

Having said all that, I am still struck by how many Americans, especially on the Republican side — as the survey data shows — do not agree with me. That is concerning, because I think we're going to be dealing with this challenge for a long time. That means we need a bipartisan longterm grand strategy for achieving our objectives, when still lots of people, including maybe even the president himself, doesn't agree with the threat assessment. That makes it hard to forge a bipartisan longterm strategy for dealing with Putin's Russia.