The 2020 election has its closest parallel in the protracted, difficult 1876 contest between Tilden and Hayes 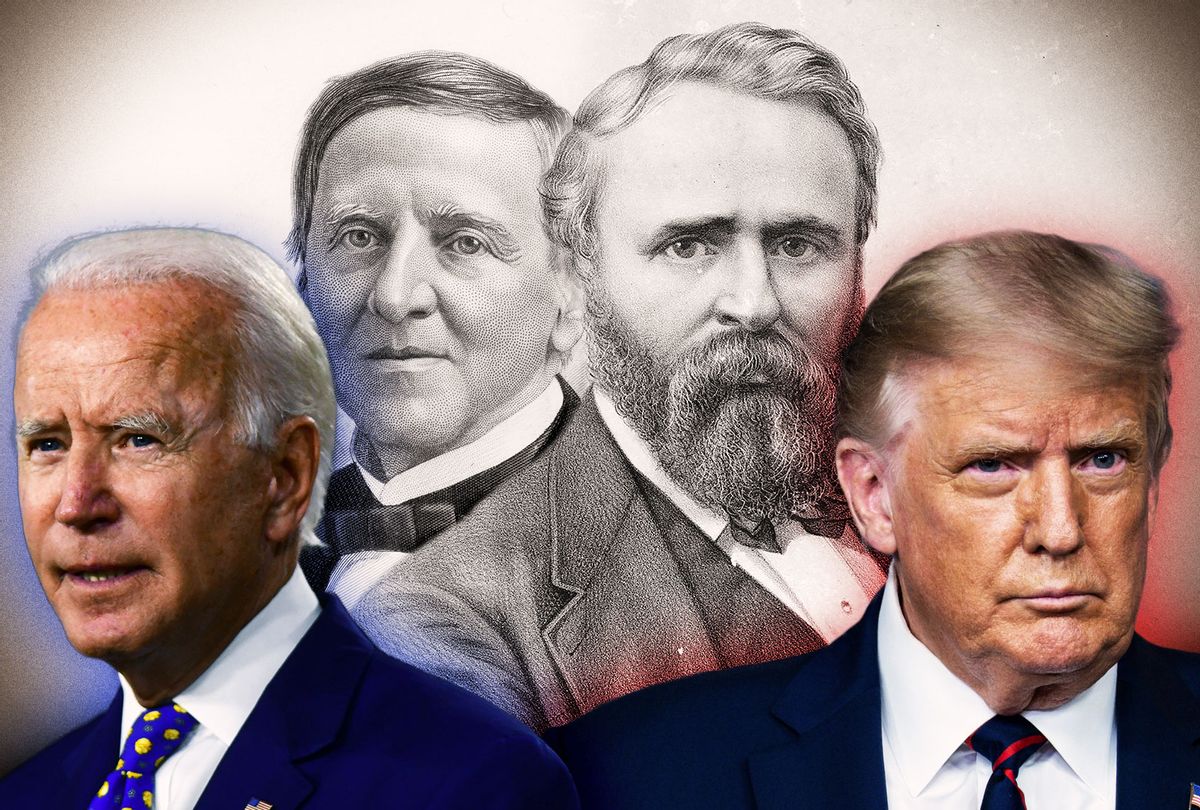 There's never been a candidate quite like Donald Trump, nor an election quite like 2020's. Yet students of history have noticed one surprising and very apt comparison case study: the presidential election of 1876. Though 144 years have passed, the similarities are striking. And learning about the 1876 election might just might help us understand this one a little better.

The 1876/2020 comparison hasn't gone unnoticed; media outlets from The New York Times and The Washington Post to Newsweek and the Philadelphia Inquirer have pointed them out. Yet while there are many similarities between the 2020 presidential election — where Democrat Joe Biden faced off against Republican Donald Trump — and the 1876 contest between Democrat Samuel Tilden and Republican Rutherford Hayes, the key difference is this: While both the Republicans and the Democrats cheated in 1876, Trump and his supporters are alone guilty of that evil in 2020. (I'm specifically referring to Trump and GOP efforts to slow the US mail and thus the mail-in vote, to close hundreds of polling sites in Black and Latino neighborhoods, to intimidate voters, and to stop or manipulate the vote count in states that are still counting their votes.)

But back to what they have in common, which is quite a lot. Both elections were controversial and were decided well past election day. (Although it should be noted that, because presidents were inaugurated in March instead of January before the 1930s, the 1876 contest took five months to be decided; while the counting will continue for the 2020 election for a while, Joe Biden is nominally the winner.) On both occasions the Republicans held the White House and the Democrats were challenging them, although incumbent President Ulysses S. Grant opted not to seek another term in 1876 (he waited until 1880 to run for a third term, which at that time was legal) and instead allowed the Republicans to nominate Hayes as his successor.

Both elections saw historic voter turnout: The 1876 election had a turnout of 81.8%, the single highest mark in American history and an increase of more than 10 points from the turnout in 1872. The 2020 election is projected to have an eligible voter turnout in the ballpark of 66%, which would mean the highest voter turnout of any presidential election since the 1900 contest.

Each election occurred during a bad economy, prompted by the Panic of 1873 in the former case and Trump's bungling response to the coronavirus pandemic in the latter. They also both occurred during times when presidential impeachments were fresh on the public's mind — President Andrew Johnson became the first president ever impeached in 1868, while Trump was impeached himself earlier this year — and in each contest the corruption of the incumbent administration was a major issue for voters. (Here is a link with more on the Grant administration's scandals.)

There are even some eerie superficial similarities between the two elections. While the votes are still being counted at the time of this writing, it seems likely that the final popular vote result will show Biden with roughly 51% and Trump with roughly 48%, just as Tilden had roughly 51% of the popular vote and Hayes had roughly 48%. Both elections occurred at a time when the Republicans controlled the Senate and the Democrats controlled the House of Representatives. Even the candidates' names are similar, from the Republicans' monosyllabic "Hayes" and "Trump" to the Democrats choosing men whose surnames include the suffix '-den.'

There have been a number of great books about the 1876 election, including, notably, the late Supreme Court Chief Justice William Rehnquist's "Centennial Crisis: The Disputed Election of 1876." All of them go into considerable detail about how both sides committed widespread fraud in order to steal the contest for their champion.

The Democratic Party at that time was viciously racist, because its base was in the formerly-slaveholding South (Republicans and Democrats gradually flipped sides on civil rights issues in the mid-20th century). In the run-up to the 1876 election, the Democrats went to considerable lengths to intimidate African American voters from going to the polls or — when that proved impossible — tricking them through the use of deceptive ballots into voting against Republican candidates. On the other side of the country, Oregon's Democratic Governor La Fayette Grover disliked it that the Republican Hayes won his state, and tried to offset that by declaring one of the Republican electors ineligible so he could be replaced with a pro-Tilden Democrat.

The Republicans were not blameless either. Because the Republican-controlled federal government still had control over many Southern states due to Reconstruction programs meant to reintegrate the former rebels back into the union, Republican-dominated election boards in Florida, Louisiana and South Carolina used flimsy pretexts to toss out Democratic votes whenever they could. In South Carolina, eligible voter turnout reached an impossible 101 percent. When the election inevitably became ensnared in legal battles — with some observers concerned that it would even lead to another Civil War, as the previous one had ended less than a dozen years earlier — Republicans pushed for the Supreme Court to resolve the disputes because they knew they had a majority on that body. (Hence another similarity between the two elections, since Trump has openly admitted he hopes the federal court system can bail him out if he loses.)

That did not work, and ultimately an electoral commission was selected with five congressional Democrats, five congressional Republicans and five members of the Supreme Court. Four of those Supreme Court judges were evenly divided between Democrats and Republicans while the fifth, Justice David Davis, was expected to be neutral. After Davis was unexpectedly elected to the Senate, however, he recused himself and was replaced by Justice Joseph P. Bradley, a Republican who supported Hayes despite claiming to be impartial.

Naturally, the body ruled in favor of Hayes along party lines, but angry Democrats threatened to engage in violence unless Tilden was elected. (Unlike Trump, who has unsubtly encouraged his supporters to be violent unless he wins, Tilden made it clear that he did not want violence regardless of the outcome.) In order to make sure that Hayes would prevail, members of both parties in Congress struck an informal deal known as the Compromise of 1877. Its terms were simple: Democrats would allow Hayes to become president if Republicans pulled the last remaining federal troops out of the South, thereby officially ending the Reconstruction era and abandoning African Americans to the racist whims of Southern whites. The trade, in short, was that Republicans would allow an entire race to experience generations of persecution as long as Hayes could become president.

In the election of 2020, by contrast, Trump and the Republicans who support him are alone to blame for the post- and pre-election shenanigans. Unlike 1876, there is no voter fraud. The only reason there is any controversy about the results of this election is because Trump is a narcissist who cannot bear the thought of being labeled as a loser. During his 2016 campaign against Democrat Hillary Clinton, Trump repeatedly stated before the election that he would not accept the results unless he won. Even though his victory that year was not legally contested, he was so sore over losing the popular vote that he created a bogus voter fraud commission to prove that he had actually won it — which, of course, it was unable to do, because he had not.

Now, in 2020, Trump's behavior has been even worse. There had been ominous hints that he would simply refuse to leave the White House if he lost the election. The Republican Party has gone to unprecedented lengths to engage in voter suppression, with Trump even appointing officials to implement policies to slow down the United States Postal Service so that mail-in votes (which are more likely to be cast by Democrats) might be unable to arrive before Election Day and thus be disqualified. Trump repeatedly lied about mail-in votes in order to discredit them, claiming they are susceptible to fraud without producing a shred of evidence to back up his assertion, and has made it clear that he will only accept the results if they declare him to be the winner. Since the election he has prematurely declared victory, filed a flurry of frivolous lawsuits in order to stop votes from being counted and outright fabricated stories of fraud during a Thursday press conference to buttress his complaints. His supporters have even talked about having legislatures in swing states that voted for Biden override the popular vote and submit pro-Trump electors to the electoral college, even though doing so would violate federal law.

This is not to say that Biden is a saint. (See also: his Senate record, the crime bill he championed, his Iraq War support, etc.) Merely, in the very specific context of the 2020 presidential election, Biden has not cheated, attempted to suppress votes, or engaged in ratf**king.

Whereas in 1876, both the Hayes campaign and the Tilden campaign were involved in the chicanery that led to the contested election, although each candidate had the redeeming quality of discouraging their supporters from acts of violence. In the 2020 election, Trump alone is the one trying to steal this thing, and he alone has been willing to egg his supporters on to violence

After Hayes won in 1876, he was given the derisive nickname of "His Fraudulency," and deservingly so. If Trump somehow stages a coup or commits fraud to stay in office, perhaps it will be revived.