America in the 2020s is disturbingly reminiscent of Germany 100 years ago. Spoiler: That didn't end well 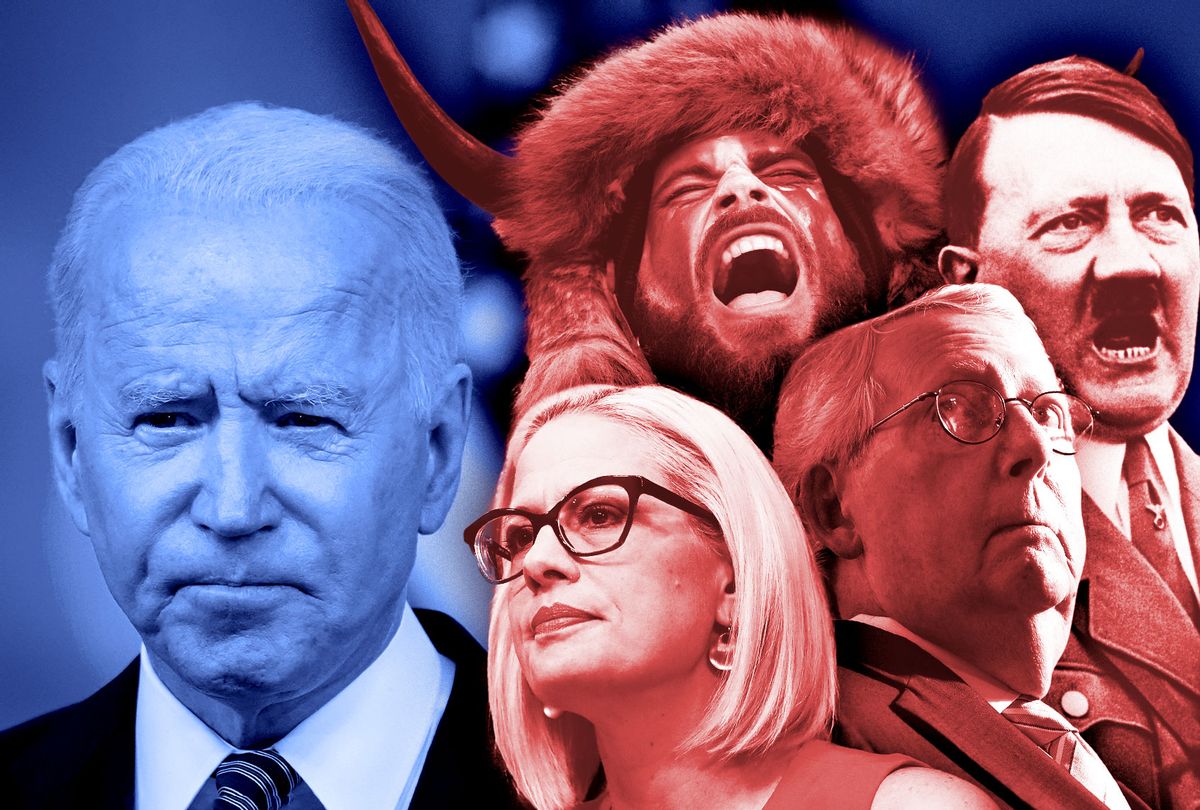 If Donald Trump's movement is destined to be America's answer to Nazism, than the Joe Biden administration is currently a rough equivalent of the Weimar Republic — the unstable constitutional democracy that governed Germany before the rise of Adolf Hitler. The comparison is imperfect, but the cautionary tale is still clear. There is an obvious risk that Biden and the narrow Democratic majorities in Congress will fail, and that Trump or a successor will take over and then cement themselves into power for at least the next generation. Every American who wants to avoid this — especially Biden and the leading Democrats in Congress — needs to learn the right lessons from Germany in the 1920s and 1930s.

It would require a medium-length academic article to lay out all the similar and dissimilar qualities of these two nations in these two periods. But for the purposes of understanding the threat posed by Trumpism, there are five key similarities:

1. Both sagas began with an incompetent right-wing ruler. In Germany's case, they had the misfortune of being led by Kaiser Wilhelm II, who has been described as viewing "other people in instrumental terms," as a "compulsive liar" and possessing "a limited understanding of cause and effect." That sounds more than a little bit like Donald Trump, whose administration was plagued with scandal and who failed to effectively manage the COVID-19 pandemic. On both occasions, that ruler was eventually removed from power (through losing both World War I and the German Revolution in the case of the former and losing the 2020 election in the case of the latter).

2. Both stories continued because of a Big Lie. Hitler appealed to nationalist sentiments by claiming that Germany had actually won World War I but been betrayed behind the scenes by a conspiracy of socialists and Jews. Trump, who displays narcissistic traits and has spent years telling people that any election he loses is by definition stolen from him, has without evidence or any logical argument insisted that Biden cheated in 2020. Another defeated president might have been dismissed as a pathological sore loser, but Trump's cult of personality is so strong that his Trumper tantrum has now become a defining part of Republicanism.

3. Both used their Big Lies to break democratic norms. In Hitler's case, he became a de facto legal dictator shortly after rising to power. Because America has a much longer history of unbroken democratic government than Germany did in 1933, things will be trickier for the Trumpists. In Trump's case, he became the first president to lose an election and refuse to accept the result (there have been 10 previous defeated presidents, and all accepted the voters' verdict), as well as the first to incite an insurrection to stay in power. Trump is now reportedly fueling conspiracy theories that he could still overturn the election; just as significantly, Republicans are using his Big Lie to restrict voting for Democratic-leaning groups throughout the country. Through these methods, they will make it possible for Republicans to steal future elections — presidential and local — through means created to "fix" the problem they manufactured through their Big Lie. No doubt there will be many future Big Lies.

4. Both Hitler and Trump use fascist tactics to win over their supporters. These include appeals to nationalism, vilification of "out" groups and conditioning their followers to use self-expression as a substitute for authentic political self-agency. (It helps when they can create a cult of personality around the leader figure.)

5. Both may wind up using their legal troubles to create resurrection narratives. Hitler famously served nine months in prison for participating in a failed coup d'état known as the Beer Hall Putsch. Trump may go to prison for anything and everything from his own coup attempt to the numerous financial crimes alleged against him. If he's convicted, he will likely be held up as a martyr; if he doesn't, that fact will be cited as vindication.

Because of these similarities, it is unfortunately conceivable that Trump will complete his takeover of the Republican Party (generously assuming he has not already done so) and the Trumpists will win every future election because of their various voter suppression laws and Orwellian propaganda. We face a future in which Trump's brand of right-wing politics is not only empowered, but virtually impossible to dislodge. My guess is the process will start gaining steam soon, win some important victories in the 2022 midterm elections and then climax when either Trump or a Trumpist is elected in 2024.

How can Biden make sure this does not happen?

He must recognize the gravity of the crisis and prioritize neutralizing it. That means making sure Republicans can't cover up the truth about Trumpism's anti-democratic agenda, and that voting rights are protected.

None of that will be possible as long as Republicans in the Senate can filibuster legislation to death. Even though Democrats have a theoretical majority in a 50-50 Senate because of Vice President Kamala Harris' tie-breaking vote, two Democrats — Joe Manchin of West Virginia and Kyrsten Sinema of Arizona — have infamously refused to support ending the filibuster. Their rationale is that of British Prime Minister Neville Chamberlain, who notoriously gave part of Czechoslovakia to Germany and thereby emboldened Hitler: Like Chamberlain, they want to appease the far right extremists in their midst. Today this means legislation that would protect voting rights, investigate the Trumpist coup effort and help America's economy recover from the COVID-19 pandemic is being unnecessarily thwarted or watered down by Republicans bent on reclaiming power.

While Biden has expressed frustration with Manchin and Sinema, that is nowhere near enough. Biden and other leading Democrats need to make it clear that if Manchin and Sinema do not support ending the filibuster, they will suffer serious political consequences. The Trumpists understood this principle when they stripped Rep. Liz Cheney of Wyoming of her position in the House Republican leadership because she wouldn't back the Big Lie. In their quest to Make America Forever Trumpist, they will tolerate no dissent. When it comes to what Democrats must do to stop Manchin and Sinema, however, the goal is not to suppress dissent but to make sure that those who do suppress dissent can't rise to power. If Manchin and Sinema refuse to do something reasonable to stop them, the Democratic Party must make them suffer politically for it. To quote John F. Kennedy's final speech (which he never got to deliver because he was assassinated: "This is a time for courage and a time of challenge. Neither conformity nor complacency will do. Neither fanatics nor the faint-hearted are needed."

Consider this nightmare scenario: Sinema and Manchin switch parties and Democrats lose control of the Senate. As bad as that might be, it would also force Republicans to shoulder some of the blame for political gridlock, and might be preferable to Democrats being seen as impotent because two bad senators are blocking their entire agenda. If Biden can't get Manchin and Sinema to stop supporting the filibuster and back his agenda, then they deserve to be effectively treated as Republicans even if they remain nominal Democrats. Biden can still creatively use executive power to at least somewhat follow this next step. (I elaborate on that here.)

That step is to make sure that he adequately addresses the people's legitimate needs. The Weimar Republic fell, in part, because of widespread economic hardships that the government simply could not fix. Biden needs to make sure that the vast majority of Americans feel economically secure, safe from threats foreign and domestic (like terrorists and pandemics), and protected from long-term existential crises like global warming, plastic pollution and income inequality. Any legislation passed anywhere in the nation that limits citizens' access to voting must be stricken from the books. Lies spread in bad faith to discourage voting, from Trump claiming he won in 2020 to myths about mail-in ballots, have to be proactively rebutted.

It is unrealistic to expect Biden to be a revolutionary even if Manchin and Sinema do stop playing God, but he is capable of doing a lot entirely on his own. Whenever possible, he must be bold.

Finally, Biden must make sure that we never forget Jan. 6. Just as George W. Bush's presidency was defined by his response to the 9/11 terrorist attack, so too will Joe Biden's be defined by whether he can make 1/6 into a cornerstone of our political consciousness. If he can do that, he will be able to make sure that Trumpism's anti-democratic philosophy — which poses a far more dangerous threat to America than Islamist terrorism — is known by all but its followers for what it is.

This won't be easy, but we don't have a choice. A century ago one of the world's great powers collapsed into authoritarian evil with astonishing rapidity: While monarchists and major capitalists believed Adolf Hitler was a clown they could control, the opponents were divided, confused and ineffective. Aspects of that history are repeating themselves, and the question now is whether we have learned from the mistakes of the past to alter the outcome.