The drug war has been a colossal, expensive disaster. Now the right can build a police state to pursue a new enemy 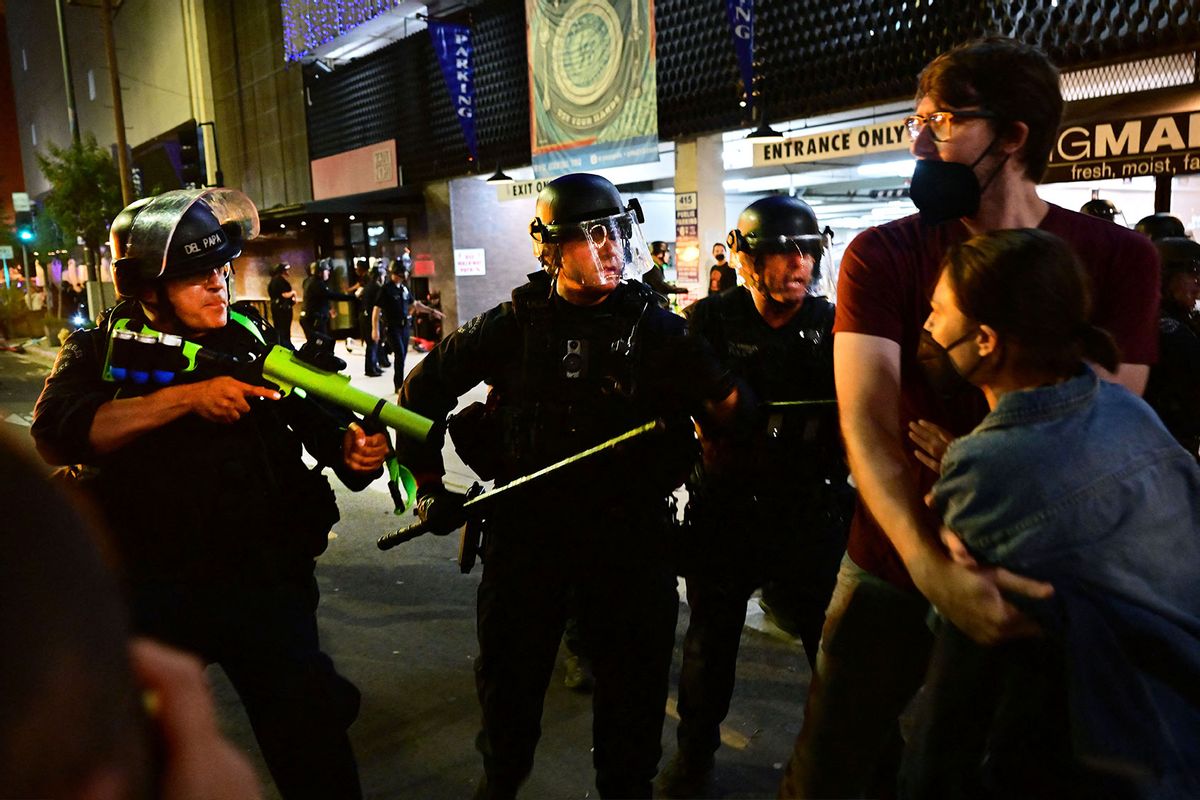 Police holding rubber-bullet guns and batons move to disperse a crowd of abortion rights activists protesting after the overturning of Roe Vs. Wade by the US Supreme Court, in Downtown Los Angeles, on June 24, 2022. (FREDERIC J. BROWN/AFP via Getty Images)
--

In 2014, a Phoenix cop killed 34-year-old Rumain Brisbon. Police got a tip that Brisbon was selling drugs, so they went to find him. When Brisbon tried to pull what officers said they thought was a gun from his pocket, they opened fire. Only he didn't have a gun at all — just a bottle of oxycodone.

This is not an unusual story for anyone paying attention to the news in America over the last 50 years. Brisbon was one of countless casualties of our ill-conceived War on Drugs. We occasionally catch the names of collateral damage — Breonna Taylor is a notable example — but for the most part, we've accepted the constant buzz of unnecessary assault, state-sanctioned home invasions, robbery and death as background noise. The War on Drugs is a war, after all, and we can't be expected to monitor every injustice in war, can we?

By now, it is widely accepted that the American drug war has been a colossal failure. Mainstream conservatives like the Koch brothers admit that our continued obsession with drug crime has had "huge negative manifestations, not only for the individuals who get trapped in that system, but also for society." Even the most fringe GOP fascist loonies now support legalization of cannabis. Maybe, just maybe, we'll see drug incarceration rates continue to fall.

But do we think these bodies, without more, will meet the needs of the insatiable criminal-industrial complex? Surely not.

Enter the War on Abortion. Elective abortion is now functionally illegal in more than 20 states. In those states, the mechanisms used to keep providers in check will be those we utilize to deal with all other crimes: police, courts and prisons. At a bare minimum, we can expect that those caught aiding and abetting anyone who seeks abortion care will have their houses raided by SWAT teams, their personal effects scattered about, their bodies twisted and mangled, their pets killed and their freedom summarily revoked. The patients themselves are not safe either, no matter how much mainstream anti-choice groups claim they have "never advocated for penalties for women." Women have already been charged with murder, feticide and manslaughter for miscarriages. We'll see more of that.

RELATED: What the anti-abortion movement wants next — and how we can respond

But do we think these bodies, without more, will meet the needs of the insatiable criminal-industrial complex? Surely not. A War on Abortion, like a War on Drugs, is an ever-expanding concept, something that adapts to claim as many victims as possible. Even now, the idea that IUDs and Plan B should fall into the category of "abortion" has worked itself into mainstream conservative thought. And if those are valid targets of the War on Abortion, why not synthetic estrogen and progesterone pills? Why not spermicidal lubricant? Why not barrier methods like diaphragms and condoms? Why not onanism?

God forbid the feds get in on this, but if the GOP ever takes control of both houses of Congress again, that's exactly what will happen. Now that the courts are out of the way, nothing would stop a Republican Congress from passing a 50-state ban on abortion that will supersede whatever "safe harbor" laws blue states put in place. Then the anti-choice movement will have fully coopted the machinery used to create so much misery during the Drug War era. You can be sure they will use it. Perhaps the FBI will form an Abortion Crimes Task Force. Perhaps the Customs and Border Patrol will establish an elite Abortion Travel Enforcement unit. Perhaps an entirely new agency, like the DEA, will be necessary to police all the "abortion" happening everywhere — a Reproduction Enforcement Agency.

RELATED: How will laws against abortion be enforced? Other countries offer chilling examples

Like their drug warrior predecessors, these abortion warriors will make sure the prisons stay full for yet another generation.

A new war on American soil will help ensure the continued employment of the boys in blue, too. If millions of law enforcement officers could be conscripted into kicking in doors to private homes and killing people over a bag of marijuana or a bottle of Xanax, it should be even easier to find soldiers for the War on Abortion. What more noble cause could there be than saving innocent babies? Like their drug-warrior predecessors, these abortion warriors will make sure the prisons stay full for yet another generation.

Back in 1989, Justice Thurgood Marshall denounced what he called the "drug exception to the Constitution," referring to the idea that the courts tend to turn the other way when individuals fall victim to the nebulous crusade of the War on Drugs. The Bill of Rights, international human rights standards, our communities' norms and mores, any basic notions of decency; these are all pushed aside to make way for the mass grave we've dug in the name of stamping out narcotics. There is every reason to think that the same atrocities — and worse — will happen when the government fully commits to the War on Abortion. There is no fantasy too dystopian, no prediction too bleak, no outlook too pessimistic for what lies ahead.

The cop who shot Rumain Brisbon never faced criminal charges for his death. I never heard Brisbon's name until I sat down to write this, or if I did, I don't remember it. I likely will have forgotten it again by next week. When the War on Abortion claims its casualties from the periphery of what reasonable people might call "abortion," will we care any more than we did during the War on Drugs? When the 100th person is shot grasping a bottle of birth control pills, will we remember her name? It seems unlikely.

Read more about the fight for reproductive rights: