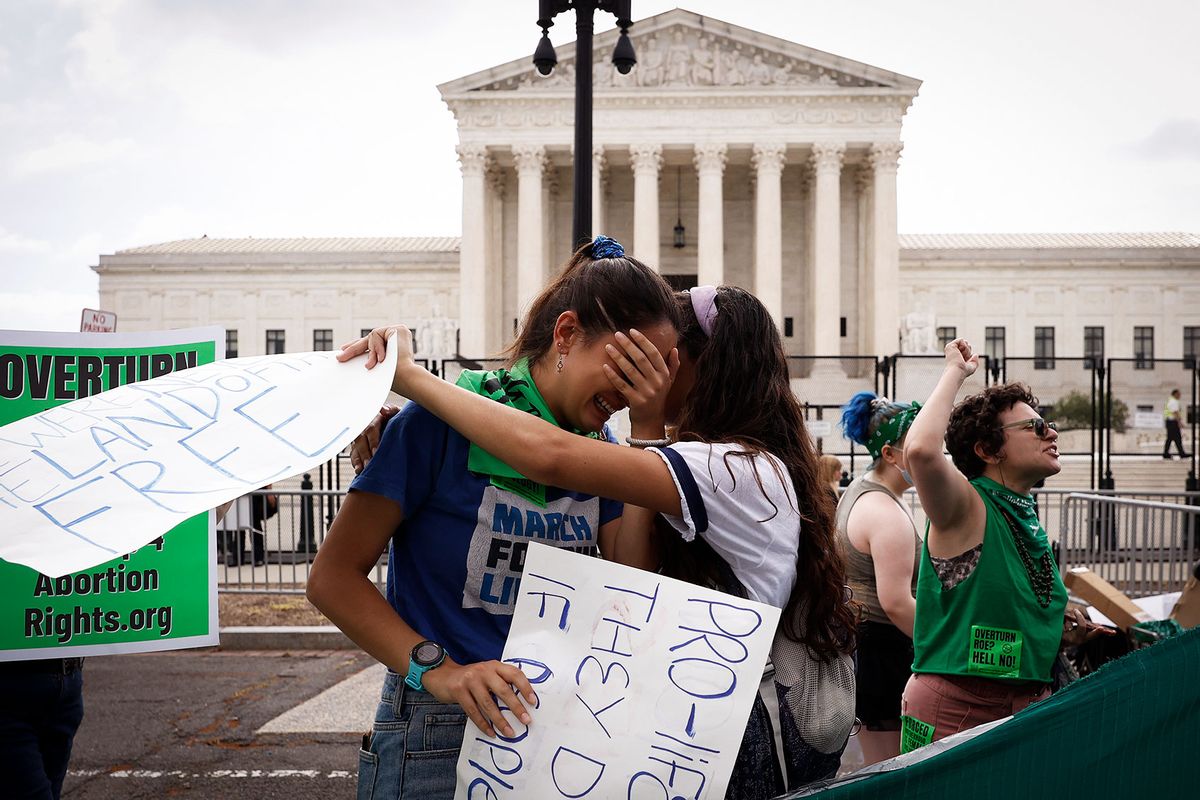 Donald Trump may be out of office, but his stubby misogynist fingers are still grabbing Americans by the pussy.

Any hope that the reaction to the leaked draft decision in Dobbs v. Jackson Women's Health would shame the Republicans on the Supreme Court into not overturning Roe v. Wade was crushed on Friday morning. Justice Samuel Alito — a human-shaped incel forum crammed into an itchy judicial robe — was determined to make these words the public record: "The Constitution does not confer a right to abortion; Roe and Casey are overruled."

As many who watch the Supreme Court closely suspected, it now appears all but certain that the draft decision was probably leaked by a conservative trying to pressure Chief Justice John Roberts into joining the majority opinion. That pressure, if that's what it was, worked. The decision to strip every American with a working uterus of basic human rights was a 6-3 majority decision. Alito, who wrote the majority opinion, was appointed by George W. Bush, but make no mistake: This decision will long be remembered as Trump's legacy.

It was Trump who tipped the balance of the court so that this decision was possible. It's fitting that the three judges appointed by a man who literally led a fascist coup would be the ones who allowed this to happen. The end of Roe isn't just a tragedy for human rights. It's the surest sign yet that American democracy is collapsing, and Republicans are securing the ability to force the majority of Americans that keep voting against them to live under minority rule.

It's hard to even comprehend how much this decision is about a malignant minority imposing an authoritarian will on the majority. It starts, of course, with how this decision directly contravenes the will of Americans, strong majorities of whom repeatedly espouse, in poll after poll, a belief that Roe should not be overturned. It is also that, of the six justices who voted to uphold abortion bans, only one — Justice Clarence Thomas — was appointed by a president who won the majority of the vote. Both Trump and Bush obtained the White House, and the ability to nominate justices, because of the archaic electoral college system that overweighs the votes of rural whites and marginalizes the majority of Americans who support reproductive rights.

Despite their fancy robes, the Republican justices on the Supreme Court are little more than a bunch of right-wing internet trolls

To compound the injustice of this, one of the Trump-nominated judges, Justice Neil Gorsuch, has no right to sit in his seat. He is only there because Sen. Mitch McConnell, R-Ky., illegally used his power as then-Senate Majority Leader to refuse to hold hearings for then-President Barack Obama's 2020 nominee to the court, Merrick Garland. Instead, in a direct violation of his constitutional duties, McConnell held the seat open for a year. All so Republicans could install someone who could be counted on to ram through endless amounts of reactionary policies rejected by the American majority that wants a clean environment, sensible gun safety regulations, fair labor laws, and human rights.

Despite their fancy robes, the Republican justices on the Supreme Court are little more than a bunch of right-wing internet trolls, and they haven't even bothered to hide that fact this session. In a ruling throwing out New York's popular law banning most guns in public, Alito was sneering in his reference to a recent mass shooting in Buffalo, New York, even though 10 people lost their lives. In the same decision, Thomas writes a defense of loose gun laws that's less coherent than the ramblings of many Breitbart commenters. As in the leaked draft of this Dobbs decision, Alito is doing more of the same: Rolling out every dumb anti-choice argument ("why don't you just give it up for adoption?") that feminists have debunked endlessly for five decades now.

It may just be that the Republican justices are lazy and dumb. Or, more likely, they know their positions are incoherent and indefensible but they don't really care. It's all about power, and how Republicans have engineered our government to make sure that their power cannot be taken from them by the voting masses. The sheer lazy stupidity of the decisions is an aesthetic choice, a thumb in the eye of liberals who keep thinking things like reason and facts should matter.

Perhaps the most obnoxious trolling in this lengthy decision, in which both Thomas and Justice Brett "Ralph Club" Kavanaugh had to get a word in, comes from Kavanaugh: "The nine unelected Members of this Court do not possess the constitutional authority to override the democratic process and to decree either a pro-life or a pro-choice abortion policy for all 330 million people in the United States."

What a dark joke, pretending to care for the democratic process! If America had a healthy democracy, this wouldn't be happening, none of it. The Supreme Court would be stocked with Obama and Al Gore nominees, not Bush and Trump ones. The will of the people to have their basic right to control what happens to their bodies would be upheld.

In a recent dissent of another extremely radical far-right decision handed down by the conservative majority — which basically ends Fourth Amendment protections for the majority of Americans who live within 100 miles of a border — Justice Sonia Sotomayor warned that a "restless and newly constituted court" is ready to destroy everything most Americans hold dear, and force an authoritarian set of laws on the public by fiat. Indeed, this entire Supreme Court term has been one horrible decision after another, with so many attacks on American rights that it's nearly impossible to keep track of all that has been lost.

We're witnessing the minority oppression of a majority.

And there's no sign that the restlessness is going away. In his concurring opinion on Dobbs, Thomas openly invites lawsuits to challenge "all of this Court's substantive due process precedents, including Griswold, Lawrence, and Obergefell," i.e. the decisions that secured the right to use birth control, the right to have sex with another consenting adult in the privacy of your home, and the right to marry someone of the same sex.

Notably, Thomas elided another decision made with the same set of reasoning: Loving v. Virginia, which legalized interracial marriages like his own. But other Republican politicians, most notably Sen. Mike Braun of Indiana, have openly noted that this decision is also on the chopping block by the same legal reasoning. Decades of case law that allow Americans to choose when to have sex, when to have babies, and who to marry are now in danger from this restless Republicans-majority court.

As Justices Sonia Sotomayor, Elena Kagan, and Stephen Breyer write in their dissent, the decision "says that from the very moment of fertilization, a woman has no rights to speak of." Notably, women are a majority of Americans. Even on the most basic level, we're witnessing the minority oppression of a majority. But this decision runs deeper than that. It is the direct result of a bitter, bigoted minority's long road to seizing all the levers of power so it can impose an authoritarian agenda on the rest of us.

January 6 wasn't the end of the fascist revolt against democracy. We're watching democracy be taken away not by Proud Boys waving batons, but by conservative justices who hide their grotesque anti-democratic views behind the trappings of the Supreme Court.