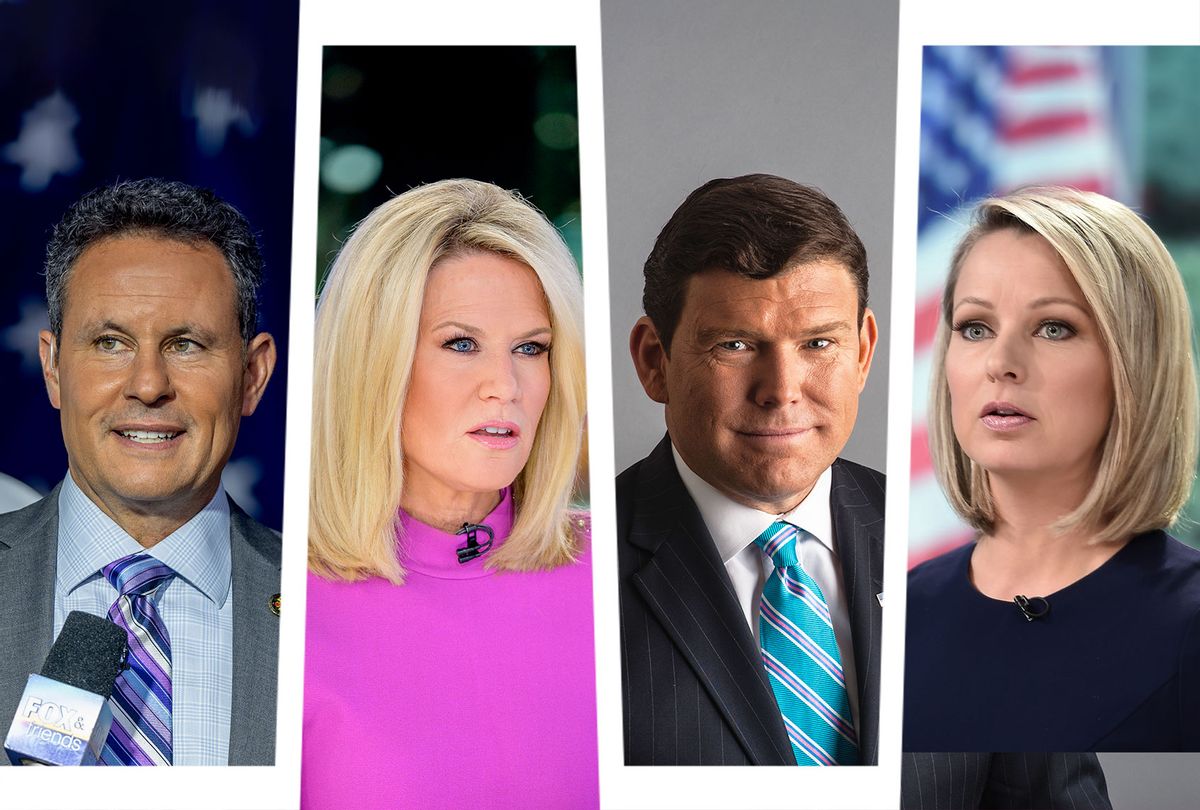 After spending more than a year promoting Donald Trump's baseless claims of election fraud, Fox News appears to be changing its tune as the January 6 committee presents increasingly damning evidence of the former president's complicity in the Capitol riot.

As the committee probe has gone public, at least four Fox News hosts and one analyst have cast doubt over Trump's grandiose claims of fraud, for which there continues to be no evidence to speak of. Some have also questioned the former president's mental fitness, suggesting that Trump cannot be trusted to steer the country in 2024 after spreading such spurious conspiracy theories about 2020.

One such instance played out just last month, when Fox News guest host Sandra Smith, an apparent skeptic of Trump's claims from the start, engaged in a fiery exchange with Rep. Mo Brooks, R-Ala., over the former president's legal failure to prove that he won in any states he lost.

"The courts are not the final arbiter of who wins federal election contests," Brooks told Smith, citing the film "2000 Mules," which bandies unsubstantiated claims that unnamed Democratic-aligned nonprofits engaged in a coordinated attempt to subvert the election.

"And that [film] has been looked at and fact-checked by multiple outlets, including Reuters, who have [reported] there isn't any proof that there was widespread voter fraud," Smith rebutted.

Roughly a week later, Fox News host Martha MacCallum, who at one point called the Capitol riot "a huge victory," echoed Smith's rhetoric, arguing that there was a "stunning" lack of evidence to support allegations of widespread fraud.

"The lack of evidence is the huge stunning clear moment here where these people are saying, 'Look I supported you, please give me something to work with,' and it simply doesn't materialize," MacCallum said, speaking of the select committee's fourth public hearing.

This week, Fox News host Brett Baier, one of the network's noted critics of Trump, also joined the chorus, arguing with a pro-Trump gubernatorial candidate that no evidence of fraud has emerged.

"I understand what you are saying," Baier told the MAGA-backed Kari Lake, who is running to unseat Arizona Republican Gov. Doug Ducey. "But there have been, as you know, more than 70 court cases where there was not evidence and there was not any state legislature or governor that failed to certify an election, including your own Republican Doug Ducey."

"Fox and Friends" host Brian Kilmeade, who reportedly had a direct line to the former president during the Capitol riot, said this week that Trump was "unhinged" in the aftermath of the election.

"The president was unhinged during that period," Kilmeade said in a "Media Buzz" segment. "I interviewed him at West Point, and he was kind enough to give me a few minutes. I've never seen him so angry. That was in between the election and Jan. 6."

Kilmeade also called it "the worst moment of Donald Trump's political career," adding: "I think how you lose in life defines who you are … A lot of times things don't work out, and are so-called unfair. Your team couldn't prove [the election was rigged], move on."

It wouldn't be the first time that Fox News had abruptly pivoted its messaging based on change in the political winds. During the 2020 election, shortly after Trump bashed the network for calling Arizona in President Biden's favor, the network reportedly issued a memo to its anchors to refrain from calling Biden the "president-elect," according to CNN.