Democrats, here's a thought: Stop retreating. Stand up for your own voters for once

Democrats have lost the plot. I'm furious at them, and terrified at the consequences. They need a better story 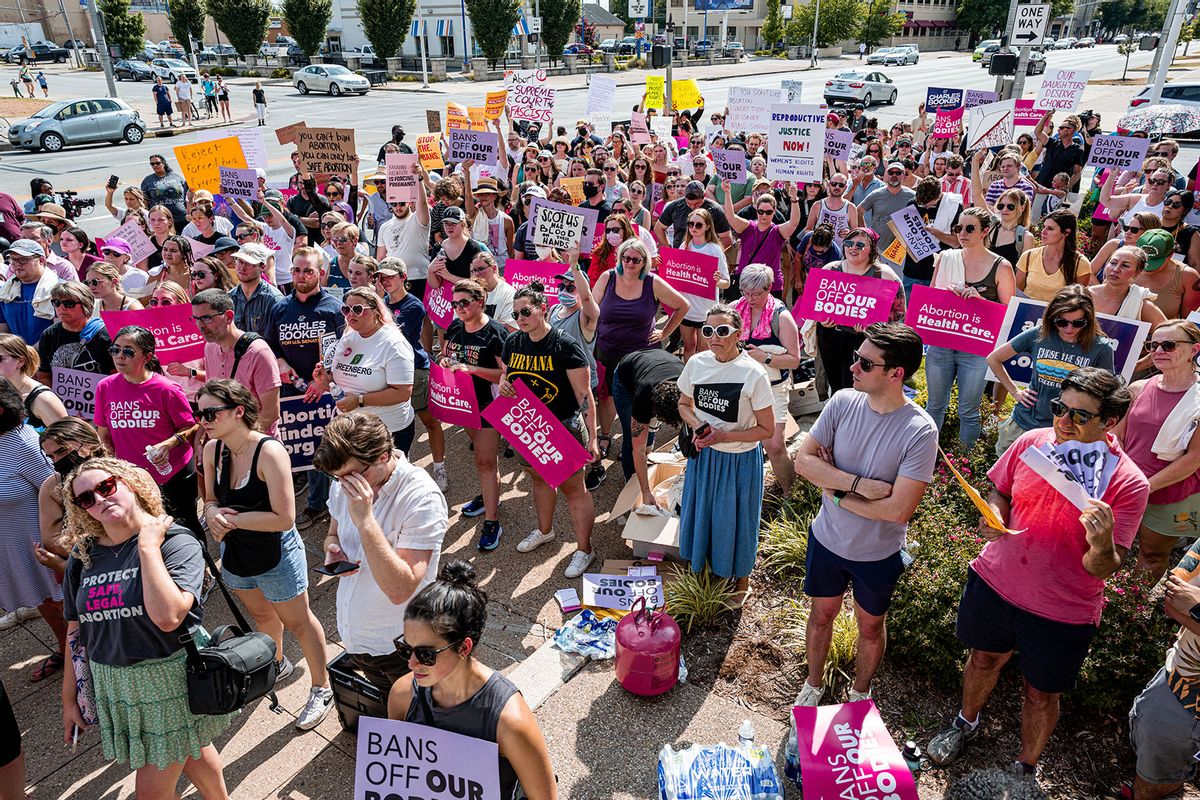 A crowd of abortion rights protesters gather in dissent of the Supreme Court's decision in the Dobbs v Jackson Women's Health case at The Gene Snyder U.S. Courthouse on June 24, 2022 in Louisville, Kentucky. (Jon Cherry/Getty Images)
--

Right after the draft of the Roe v. Wade opinion leaked, Sen. Dick Durbin of Illinois, a Democrat, condemned peaceful protests near Supreme Court judges' houses as "reprehensible" and promptly voted to provide more security for Brett McBeer and company. I wasn't surprised that my senator was quicker to protect Sam Alito from candlelight vigils than he was to protect me and my family from Sam Alito. But as a novelist and a woman, I'm furious and terrified Democrats have lost the entire plot, and the American experiment is next, not least because Dems have no idea how to tell a story.

Wannabe tyrants represent only about a quarter to a third of the population, but you wouldn't know it by the behavior of the Democratic Party. Cowering, dithering Dems accept the most ludicrous Fox News framing of every issue from inflation to policing to abortion, perpetually stumped by right-wing mud-slinging. In response to rabid authoritarianism, they hem and haw, shuffle policy papers, babble about "bipartisanship" and attempt to negotiate with GOP grifters who call them pedophiles. And then these same Democrats turn around and blame a handful of progressives, when it's conservatives from both parties who block and shred every scrap of legislation that might make all our lives a little less apocalyptic. And the administration wonders why Biden's approval numbers are tanking?

I'm no politician, and I'm certainly not one of those high-paid Democratic consultants who keeps pushing talking points from 1991. I am, however, a writer, and I understand the power of communication. Why hasn't the Democratic Party crafted a clear narrative that its own voters can understand?

Here's a story that all Democrats could tell right now: Today's GOP is engaged in a giant smash-and-grab. A grand looting. A coordinated, decades-long, multi-pronged effort to bring back the good old days of…1850. Everything they do falls under this umbrella. Why not talk about the unholy alliance of religious extremists and bloodsucking billionaires intent on subverting the will of voters? Because of this alliance, religious extremists take a hammer to our civil rights, ban books, work to dismantle public schools, vomit racist, homophobic and antisemitic garbage, and insist on genital inspections and forced birth, while the billionaires smash regulations to drive up inflation, loot institutions and rob their own employees, abuse workers, fund the spread of conspiracy theories, buy up all available housing, avoid taxes and pack the courts with political hacks who rule that all of this is just fine, democracy be damned.

Of course, most Americans don't want any of it, which is why the GOP has won the popular vote only once in the last three decades. So, right-wingers must keep smashing and grabbing everything they possibly can. They broke the Senate. They stuffed the Supreme Court with aggrieved theocrats and the lower courts with incompetents. They disenfranchised hundreds of thousands of voters. They supported a literal coup. Now, they're hounding school boards to destroy public education, stuffing their creepy faces into the private lives of families, and threatening state officials so they can steal every future election, all while using Nazi and slaver logic to turn anyone with a uterus into a brood mare for the state. Smash and grab. Smash and grab. Maybe the Democrats might want to talk about this?

Republicans accuse Democrats of being baby-killers, but do nothing to help struggling parents and families. They screamed about the formula shortage, then voted against the bill that could have helped address it.

Here's another story Dems could tell: that the right-wing tells lies, projects its own misdeeds onto others and then lies again. Take the issue of abortion. Republicans accuse Democrats of being baby killers and bray about being "pro-life" when the overwhelming majority of them have done nothing to help struggling parents and families. They don't support universal (or any kind of) health care. Or parental leave, tax credits, affordable child care, food stamps, free school lunches, universal preschool or gun safety. Republican lawmakers screamed about the formula shortage and then voted against the bill that would help address it. Their words mean nothing because we can see what they do; their actions reveal they don't care about the born, let alone the unborn.

They're not pro-life. They're pro-control. They're pro-cruelty. Pro-punishment. Pro-death. They believe people with uteruses are livestock, less than human, bodies to be bred or sterilized according to the most extreme right-wing demands, while kindergartners remain cannon fodder for gun fetishists. This is absurd and obscene. Maybe Democrats can say so, and keep repeating it.

And while they love to label the Democrats as "groomers" or "pedos," the GOP regularly supports and elevates men linked to all kinds of sex scandals, including accused rapist Donald Trump himself, along with Jim Jordan, Roy Moore, Matt Gaetz and former House Speaker Dennis Hastert, just to name a few. (It's no coincidence that accused harasser Clarence Thomas and accused rapist Brett Kavanaugh provided two of the votes to strip women of their bodily autonomy.) It's the GOP that wants to creep on children in classrooms and inspect the genitals of high school kids. Maybe Democrats could point out who the real pedos are?

Maybe, when asked "What is a woman?" Democrats might answer: "A person."

Maybe, when asked "What is a trans child?" Democrats might answer: "A child."

Maybe, when a GOP politician shrieks, "All lives matter," a Democrat might say: "No lives matter to you except yours."

Maybe, when a right-winger targets vulnerable kids, a Democrat from a purple state might quote the Republican governor of Utah and say, "I don't have to understand exactly what the kids are going through. I just want them to live."

Maybe, when a GOP congressman yammers on about "religious freedom," a Democrat can say, "Freedom means that Americans cannot be forced to abide by your extremist version of Christianity."

Here's another thing Democratic leaders need to understand: the truth does not speak for itself. Lies must be confronted and refuted, and the truth must be defended — over and over and over again. And the truth is that the GOP won't be satisfied with gutting the Voting Rights Act and overturning Roe. To mollify their addled, hateful base, they're coming after contraception, marriage equality, desegregation, separation of church and state, free speech. They want to use the courts to repeal the last two centuries.

Finally, instead of nagging terrified people for more money, Democrats could tell us what their vision for the country is, and clearly lay out their agenda. They can start with the idea that life, liberty and the pursuit of happiness do not belong to Republicans alone, that we all should have the freedom to decide how we live, who we marry, how we build our families and how we worship. Democrats should talk about the legislation they've passed — the American Rescue Plan, the Infrastructure Investment and Jobs Act, the historic gun safety law — as well as the numerous bills the GOP has blocked. And then Democrats could talk about the specific measures they intend to take right now to protect us from this corrupt and illegitimate Supreme Court, as well as what they'll do after the November election if they hold the House and increase numbers in the Senate (i.e., "Give us two more seats and we will make Roe the law of the land." Or, "Give us 60 seats in the Senate and we'll expand the Supreme Court to 13.")

Instead of nagging terrified people for money, maybe Democrats could tell us what their vision is: We should all have the freedom to decide how we live, who we marry, how we build our families and how we worship.

And then, just maybe, Democrats can back up those messages with bold and immediate action. Urge the president to declare a public health emergency. Repeal the Hyde Amendment. If possible, set up reproductive health care clinics on federal lands and/or military bases and make sure those clinics are well defended from right-wing extremists. Pass bills to ensure the right to birth control and marriage equality. Introduce bills for a federal right to abortion in case of rape or incest, a federal right to abortion in the first trimester, a federal right to an abortion when the woman's life is at risk (as it is with ectopic pregnancies), a federal prohibition on criminal penalties for women who seek or obtain abortions, a federal prohibition on criminal penalties for non-medical providers who assist women in seeking reproductive care, and so on. Hold a vote on a "pro-life" bill that includes expanded health care, prenatal care, paid family leave, child care, universal preschool and free lunch. Force the Republicans to show their hand again and again.

And how about reintroducing voting rights bills and court reform bills that include ethics rules for judges, and twist Joe Manchin and Kyrsten Sinema's arms till they agree to filibuster carve-outs? How about introducing legislation to rebuke the Supreme Court and nullify the wave of horrific decisions it has issued? How about using executive orders to get rid of student debt? Dragging CEOs into Congress to explain why they're pocketing record profits and still raising prices on consumers? And if Democrats are not sure if any of that will work, they should try anyway, to prove to voters that they're ready to meet the moment. As writer Alexandra Erin tweeted, even if those efforts fail in the short term, Democrats would learn what resonates with the public, expose weaknesses in GOP positions and fire up their own base.

Most importantly, Democrats should not stop telling these stories. Hammer at the message and the specific plans in every interview, every ad, every post or tweet. When you give your base a coherent tale to tell, when you show them you're backing up that story with action, they won't just vote for you, they'll take on some of the burden of persuading real swing voters. Plus, the clearer and more specific the message is, the more likely the press will report on it.

If Democrats finally, at long last, go on the offensive, will Mitch McConnell bitch and moan? Sure. Will Marjorie Space Laser and Fox News ditto-heads increase the flood of racist swill, bonkers attacks and doublespeak? Of course. But it's time for Democrats to stop being surprised by that, and stop backing down every time it happens. Right-wingers have weaponized shamelessness to favor the powerful. Dems must weaponize shamelessness to protect the rest of us, and to protect democracy itself. Republicans want to plunder our bodies, loot our bank accounts and rob us of our futures. Democrats need to throw out the old playbooks and fight as if all our lives depend on it, because they do.

Read more on the current state of the Democratic Party:

A teacher, poet and two-time National Book Award finalist, Laura Ruby is the author of the novels "Bone Gap" and "Thirteen Doorways, Wolves Behind Them All." Reach her at lauraruby.com or on Twitter and Instagram @thatlauraruby.