Democrats face rage after Roe disaster: "It feels like they couldn't care less"

Many of those under threat from Roe decision are furious at "vote blue" messaging: "They're not going to fight" 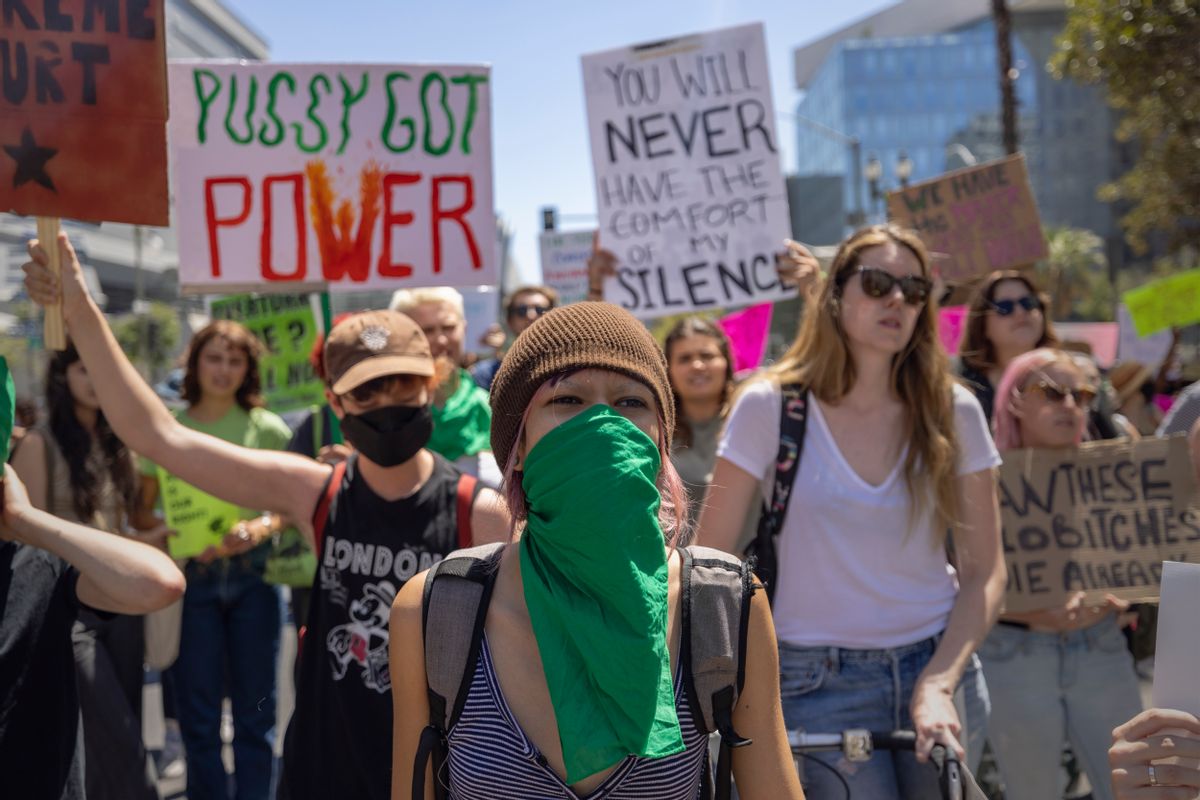 This article originally appeared at The Flashpoint on Substack. Used by permission.

Friday's landmark Supreme Court decision ending the federal right to abortion has enraged people who can get pregnant around the U.S. — and a good portion of that anger is being directed at politicians in the Democratic Party for their insufficient response.

The party's use of the decision for fundraising, and the way its supporters are blanketing social media with the assertion that voting is the only way to address the systemic failures that led to the ruling are coming in for the harshest criticism.

"My rights should not be a fundraising point for them, or a campaigning point," Zoe Warren, a protester outside the Supreme Court, told MSNBC Sunday morning. "They have had multiple opportunities to codify Roe into law over the past 20, 30, 40, 50 years — and they haven't done it."

The fury comes as the right wing in America appears to be moving quickly to cement its minoritarian control of federal and state government around the nation and Democrats, despite having control of the federal government, are doing nothing with their power.

I talked to people whose bodily autonomy could be affected by the Supreme Court ruling. Here's what they told me.

Texans on Friday evening chanted, "Voting blue is not enough; Democrats, we call your bluff" as Democratic candidate for governor Beto O'Rourke made his way through the crowd.

The anger over Democratic inaction has been a major component of the reactions to the end of Roe around the country. People are fed up. Jane S, a teacher in upstate New York, said she's had it with Democrats.

"I'll vote in local and state elections, but I don't give a shit about federal anymore," Jane told me.

"It's obvious that this was the Republican long game, and the Democrats were content to sit there with their heads in their asses, acting like the moment we're in would never come."

"It's infuriating that 'defend Roe' has been a rallying cry for fundraising, but they've never seemed to take the courts seriously," Jane added. "To anyone paying attention, it's obvious that this was the Republican long game, and the Democrats were content to sit there with their heads in their asses, acting like the moment we're in would never come because of precedent or status quo or whatever."

Not everyone is going to be as lucky as Jane was.

"I'm thinking about how fortunate I am that I could get the abortion that I needed when I was 17, that I have a doctor who trusts me to make decisions about my fertility going forward, and I know I'd be stuck in the generational poverty trap if I didn't have that control," Jane told me. "If this all happened in 2004 and I was in the 'wrong state,' the Democrats would have abandoned me, as they're abandoning countless others right now."

"I just can't get behind people basically fundraising off my health"

President Biden has continually refused to even entertain the possibility of expanding the Supreme Court, the Democratic-controlled Senate won't end the filibuster to codify Roe with the narrow majority they enjoy, and promises that the party will hold hearings in July are woefully short of what's needed.

That's not going to help the people who need help now and will be denied it — 13 states have trigger bans which will go into effect within 30 days, and eight have already banned the procedure outright.

That Democrats are asking for money at this moment is an outrage, Lauren L, a 33-year-old in Los Angeles, said. A better use of cash is to send it to local abortion and legal defense funds, whether in one's own community or in areas where people are going to face challenges around reproductive health care access.

"I just can't get behind people basically fundraising off my health — and the health and lives of other potentially pregnant people," Lauren said.

It's as if the party never actually wanted to codify the right to begin with, Rook, a 30-year-old nonbinary person in the Northeast, told me. And that doesn't bode well for the rights of trans people.

"As a trans-masc person, I also know people like me are going to be left out of the conversation entirely, despite our continued struggle to access even the most basic health care, let alone reproductive health care," they said.

"Asking us to buy into a broken system yet again"

But while that real anger is pushing people around the country to express their disgust with the party, liberals and other Democratic-supporting groups are still fired up. A CBS News poll released Sunday morning indicates that Democrats are ready to go out and vote, their levels of enthusiasm exploding after the ruling.

That doesn't necessarily translate into positive feelings about the party, however. In fact, for some people I spoke to, it was the opposite — a feeling of resignation that they would probably vote for the party on Election Day despite not having any faith in what comes next.

The party's inability to offer people anything other than empty platitudes about voting in five months is indicative of a broader laziness at the core of the institution. Democrats had ample time to prepare, Cat Becket, a 31-year-old in Chicago, told me, but aren't offering much.

The appeal to "just vote" feels remarkably tone-deaf in a political environment of gerrymandering and voter suppression.

"Real people are going to die because of this decision and it feels like they couldn't care less. As far as I know they haven't even bothered to frame it like that, which would at the very least bring home the reality of the situation," Becket said. "I'm for sure less likely to vote."

Becket's not alone. Brenna Miller, a 25-year-old from Boston, said that she finds the appeal to "just vote" to be remarkably tone-deaf given the gerrymandering and voter suppression in the U.S. system.

"It's like asking us to buy into a broken system yet again in the hopes it might fire itself; it won't," Miller told me.

Miller added that while she's on the fence about voting this year, she's ultimately likely to cast her ballot for the party anyway because of the federal-level sweep that looks inevitable and will deliver Republicans control of Congress.

"I feel obligated to participate in the attempted prevention of that," Miller said.

One step, not the only step

Not only is the reliance on voting and donating to Democrats an inadequate solution, it leaves out the other aspects of organizational community building and outreach. Marie Follayttar, executive director of Mainers for Accountable Leadership, told me that in her view the hair-trigger reaction from Democrats doesn't take into consideration the need for tending to and validating people who are in distress and under threat.

"Voting is one action but lacks a theory of change," she said.

Follayttar added that voting alone is not a long-term solution.

"Extracting free labor and small-dollar donations when our people are in pain is diverting funds for organizations that are doing the real work," she said.

Still, for most people I spoke with, there was a general understanding that they will continue to vote, albeit strategically. There's not a lot of enthusiasm after the decades of inaction that led to this point. Christine, a 29-year-old in Lehigh Valley who works as an organizer for a group pushing to elect Democrats around the country, said she's still going to hold her nose and cast her ballot to ensure the state doesn't ban abortion.

But she's still angry about the inaction.

"I'm fucking sick of the idea that all of that work is going to mean that politicians will do anything more than a photo op," Christine told me. "They're not going to fight because they aren't the people impacted. They aren't the patients, they aren't scared about choosing between affording an abortion and affording rent."

Read more on the end of Roe and the threat to reproductive rights: