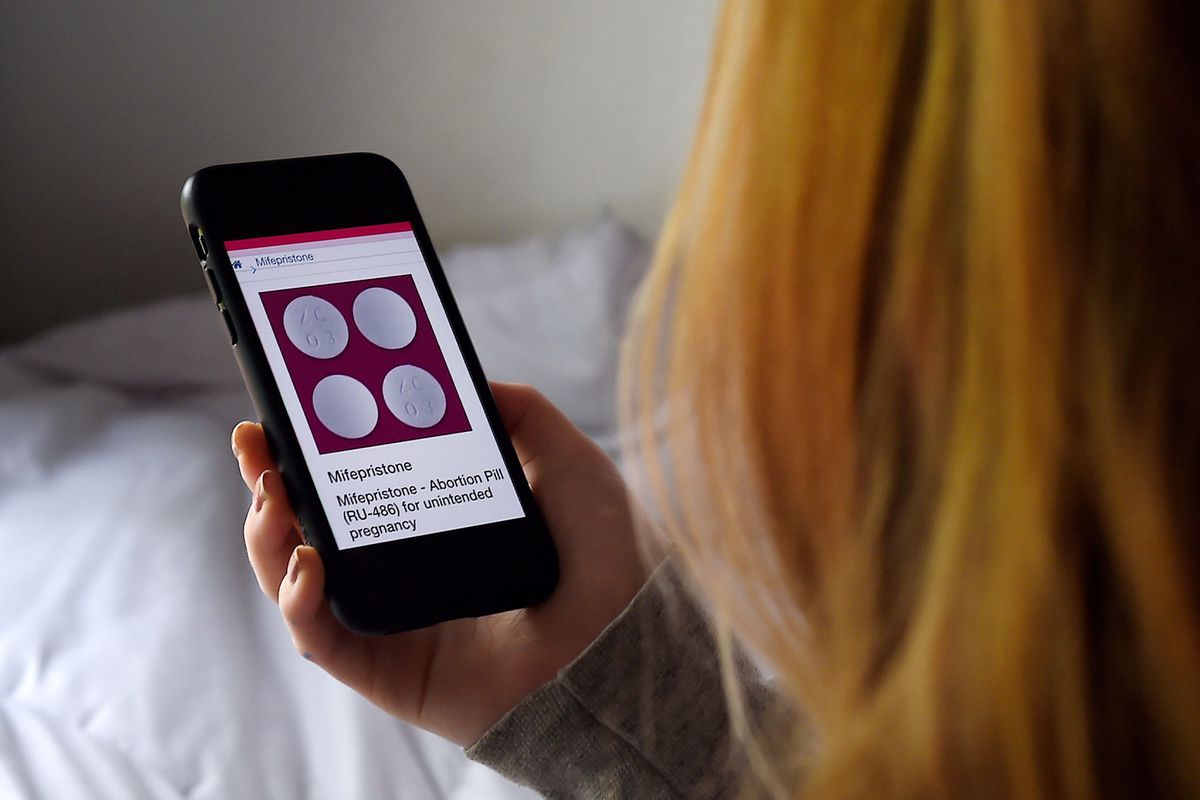 In this photo illustration, a person looks at an Abortion Pill (RU-486) for unintended pregnancy from Mifepristone displayed on a smartphone. (OLIVIER DOULIERY/AFP via Getty Images)
--

In a 5-4 decision, the Supreme Court on Friday overturned the landmark 1973 Roe v. Wade ruling, eliminating the constitutional right to an abortion and sweeping nearly five decades of legal precedent aside in the process.

"The Constitution does not confer a right to abortion," Justice Samuel Alito wrote. "It is time to heed the Constitution and return the issue of abortion to the people's elected representatives."

The court's 6-3 decision in the case of Dobbs v. Jackson Women's Health Organization upheld a Mississippi law that banned most abortions after 15 weeks of pregnancy. Technically, the vote to overturn Roe was 5-4, with Chief Justice John Roberts attempting to split the difference: In a separate concurring opinion, he agreed with the majority opinion on Dobbs but argued for "a more measured course," saying he would have upheld the 1973 precedent.

With Roe v. Wade overturned, laws regulating abortion access are in the hands of the states. In 13 states — Idaho, Kentucky, Louisiana, Mississippi, Missouri, North Dakota, Oklahoma, South Dakota, Tennessee, Texas, Utah and Wyoming — "trigger laws" making abortion illegal will go into effect over the next 30 days. In three of those states — Kentucky, Louisiana, and South Dakota — the trigger laws were set to go into effect immediately.

While the details of these trigger bans vary from state to state — i.e. exceptions in the case of rape or incest, or preventing the injury or death of a pregnant person — access to abortions will be significantly curtailed.

While abortion access in the post-Roe era will be similar to the pre-Roe (meaning pre-1973) era, one key difference is that there are safer options to conduct self-managed abortions today. After a draft of the ruling leaked last month, Dr. Carole Joffe, a professor in Advancing New Standards in Reproductive Health (ANSIRH) at the University of California–San Francisco, told Salon that she expected there to be "fewer injuries" but "more surveillance."

"Because people will make use of much safer methods like the pills," Joffe said, referencing medication abortion. "However, I think given the strength of the anti-abortion movement, I think we will have a lot more legal surveillance," she added.

Medication abortion, also known as the abortion pill, involves two different drugs delivered through a pill: mifepristone and misoprostol. Mifepristone (also known as RU-486), which was approved for abortion in the United States by the FDA in September 2000 can be used safely and effectively to terminate a pregnancy up to 70 days after a person's last menstrual cycle. Misoprostol is taken after mifepristone. The abortion pill is just one example of what pre-Roe women didn't have access to fifty years ago.

Joffe said that one similarity post-Roe America will have to pre-Roe America is that "as always, in America, people with resources will do better than people without resources."

How to get Plan B

Plan B, colloquially known as the morning-after pill, is a form of birth control. Not to be confused with the aforementioned abortion pill, Plan B, which is the hormone levonorgestrel, is an emergency contraceptive, and helps prevent pregnancy within 72 hours of having unprotected sex. It does not induce abortion, and doesn't guarantee that pregnancy won't occur. Since 2006, women and men over the age of 18 have been allowed to buy Plan B, over-the-counter at local pharmacies, in all 50 states.

While Plan B won't become immediately illegal in the states that ban abortions, the right to access said contraception could end up on shaky ground and be challenged in some states. In a concurring opinion, Justice Clarence Thomas wrote that the court "should reconsider" past rulings that established contraception rights. As of now, the Plan B pill is still legal in the U.S.

Indeed, anti-abortion activists have incorrectly argued that Plan B causes abortions — which is not true, because they do not terminate pregnancies as pregnancy does not occur if implantation has not happened. Despite that, if any state did legally define Plan B as causing an abortion, stores that sell Plan B could be in violation of state laws. If that's the case, some people would be forced to leave their states in order to obtain the drug — but that's a worst case scenario, and won't be an immediate effect of the overturning of Roe v. Wade.

Anti-abortion activists have incorrectly argued that Plan B causes abortions — which is not true, because the drug does not terminate pregnancies, as pregnancy does not occur if implantation has not happened.

Even with abortion bans in states and potential over-the-counter barriers, anyone should be able to access over-the-counter levonorgestrel morning-after pills at hospitals, Planned Parenthood clinics, and doctor's offices in every state regardless of abortion bans. You can also order morning-pills online, including retailers like cvs.com, Walmart, and Amazon. If affordability is a barrier (expect to pay $40-$50 for a one-time use pack), afterpill.com has an option that costs $25 including shipping and handling. Websites kwikmed.com, ellanow.com, and prjktruby.com also provide online options for people who can't get the pill in a nearby store.

How to get the abortion pill

Medication abortions are very safe and effective. The process first requires taking a mifepristone pill, then a second pill containing misoprostol 24 to 48 hours later. Medication abortion works up to 70 days after the first day of a person's last period — usually when a person is 10 weeks pregnant. The two-pill regimen, sold under the brand name Mifeprex, has been approved by the FDA for use for more than 20 years and can be prescribed via telemedicine, as the drug can only be prescribed by a certified health provider. According to data from the Centers for Disease Control and Prevention, medication abortions account for an estimated 42 percent of all abortions in the United States.

Unfortunately, access to medicated abortions will be restricted in states that ban abortions if Roe v. Wade is overturned.

"State restrictions on abortion and those specific to mifepristone would remain in place in a post-Roe world, and access would remain in states that don't restrict abortion," Kate Connors, spokesperson for the American College of Obstetricians and Gynecologists, told Bloomberg Law before the ruling.

However, mail orders and telehealth will likely see an uptick in demand. While 19 states have laws that require a clinician to be physically present when abortion-inducing drugs are administered — which makes telehealth appointments effectively illegal — there will likely be an underground market of selling abortion pills in such states, meaning many people are conducting self-managed medication abortions.

"What people will do going forward — which is what is already happening — is that people will self-manage their abortions, and that is extralegal, [and] will not involve providers in the United States," Joffe told Salon.

As Cohen explained to Salon, many state statutes technically make providing an abortion illegal, rather than prosecute those getting them. However, in states that do ban abortions, medication abortions would be harder to access because it would be illegal for providers across state lines to provide telehealth.

"So if a doctor is practicing medicine, say in New York — currently New York law only allows them to practice their license, via telehealth, if the patient is also in New York," Cohen said, noting there is a movement trying to push blue states to allow practice of medicine based on where the physician is based, not where the patient is located.

As it stands, it would be illegal for telemedicine abortion consultations to happen in states that ban abortions— even if the doctor were located in a state where abortion was legal.

However, as it stands, it would be illegal for telemedicine abortion consultations to happen in states that ban abortions— even if the doctor were located in a state where abortion was legal. Hence, Joffe's prediction that there will be more self-managed abortions, though that, too, could come with a risk. A woman in Texas was thrown in jail on a murder charge for allegedly having caused the "death of an individual by self-induced abortion," though the case was later dropped.

The website Aid Access offers women in the U.S. the option to obtain an abortion in the privacy of their own homes. If you live in Maryland, Minnesota, New Mexico, Illinois, or Virginia — or can travel to those states — Whole Woman's Health provides medication abortion care by mail.

Now that Roe v. Wade has been overturned, it will be illegal for clinics to provide procedural abortions in states that ban abortions. That means pregnant people in those states will have to travel to states where abortions are legal in order to obtain one. For assistance with finding a verified provider in states where abortion remains legal, Planned Parenthood providers are directing individuals to AbortionFinder.org.

Of course, not everyone will have the means to do so. Travel can be expensive and time-consuming, and requires resources that many don't have, whether that means a plane ticket, a car, gas money or the flexibility to take time off work.

Abortion-banning states may end up trying to retaliate for the privacy protections afforded by states like California and Washington. Cohen pointed to a new Oklahoma law that states that anyone convicted of performing an abortion could face up to 10 years in prison and a $100,000 fine.

But abortion-banning states may end up trying to retaliate for the privacy protections afforded by states like California and Washington. Cohen said he fears that in states that ban abortions, people who provide them could face extreme penalties. Cohen pointed to a new Oklahoma law that states that anyone convicted of performing an abortion could face up to 10 years in prison and a $100,000 fine.

"That's pretty extreme," Cohen said. "But I think that if we're going to see laws like that, and if a state really wants to be consistent — and certainly this is not my view of how things should be — but if they want to be consistent, they could say that a fertilized egg is a human being, which some state laws have tried to do, and now you're talking murder.

"I wouldn't be surprised to see some prosecutors, if there were someone performing procedural abortions in that state, go after the person for murder," Cohen said.

Individuals who want to travel out of state for procedural abortions but can't afford to do so may seek assistance from abortion funds. One resource is The National Network of Abortion Funds.