Don't be the one to bring a half-melted gallon of ice cream to the cookout. Try this instead 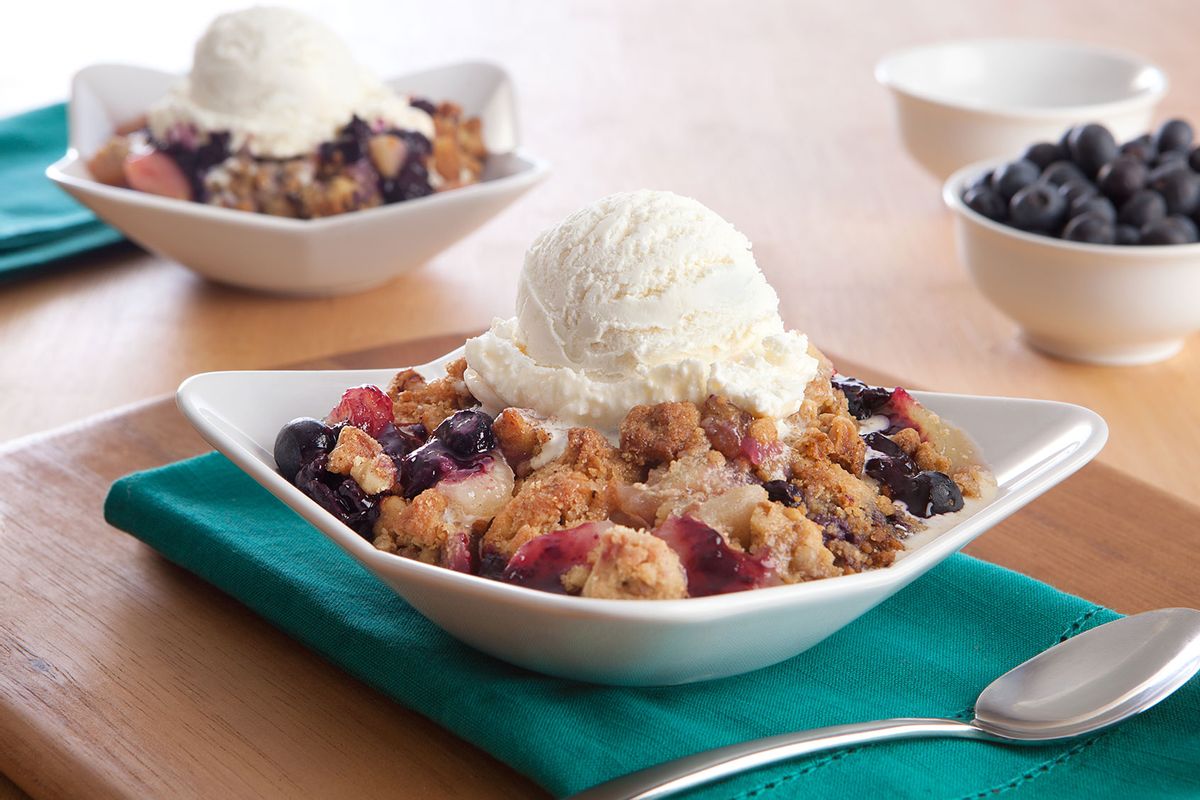 So, look, we can all agree: the outside temperature is unacceptable. In my beloved home state of Kentucky, we are still on a power grid fueled by coal, so keeping the house in a habitable zone throughout the season costs about the same as a second-hand Rolex.*

Leaving aside any scheduling issues, personal preferences, or pandemic-era ingredient availability, my motivation to dash out for dry goods when someone calls an audible and demands a same-day potluck dessert hovers somewhere around zero. I also have what we might call a reputation for being kind of a lot, so I can't just roll up to the barbecue with a melty half gallon of Kirkland Signature vanilla ice cream. This, my friends, is when I make Aunt Audrey's cobbler.

Related: Zhoosh up your summer ice cream game like a pastry chef

Aunt Audrey was my mom's mom's dad's sister, and she was just lovely, a totally self-sufficient broad, though she would probably have preferred "dame" or maybe even "gentlewoman." Sometime in her late nineties, she came home from a doctor's appointment, realized she had locked herself out, and — instead of calling her neighbor for a spare key — wrapped her elbow in her scarf, broke a basement window, and slithered her nonagenarian body through. That, my friends, is moxie.

This can-do attitude extended very much to her housekeeping philosophy and is nowhere better exemplified than in her cobbler recipe. I have the notecard (yellowed, juice-flecked) somewhere, but I have also committed it to memory because it is 1. Malleable and 2. Simple. The beauty of Aunt Audrey's cobbler is you pretty much always have everything on hand. It can be made gluten-free or vegan without a second thought. Seasonal produce? Great. Only got canned peaches on hand? No problem. Trying to use up something right before it goes bad? You're in the right place. Trying to show off the spices you brought back from when you studied abroad in Krakow? Toss that right in. Want to put it on the grill because the mere notion of turning on the oven makes your head swim? It's a little more advanced, but yeah, totally doable.** It's good hot. It's good cold. Portioning it requires zero forethought. It's great year-round, but it's truly the perfect summer dessert.

The proportions are well and truly the only thing that matter here. In the recipe below, I'll walk you through the canonical Audrey version which features just peaches and some very basic pantry staples, but understand this: the only limitations are your imagination and your tolerance for failure, which in this case is just mediocre cobbler.

The base of this is a 1:1:1 ratio of ingredients. You can trade out the flour for a whole wheat flour or a gluten-free option (brown rice flour, for example, makes it crispier, and if gluten isn't the issue, is cool to mix in for crispness reasons). Milk is wide open! If you're using dairy, I always opt for whole, but again: it's fine to use soy, 2%, whatever. All sugars are equally valid in the eyes of Aunt Audrey, though I would caution against doing brown sugar or a liquid sugar like molasses for all of it, just because it gets sticky. It's fine to swap a little bit, though, no question. I am a butter partisan, but you can try out whatever vegan option you like, or do a mix if you're short (I did coconut oil and a half stick of butter in a pinch recently and DAMN).

Flavoring and filling is also a free-for-all. Any fruit will work, and I love to use this as an opportunity to clean out the crisper. A mix of stone fruit and berries is wonderful, if you need more guidance than "just do it." Trade the vanilla for a dash of rum, rye, or bourbon. Try almond extract instead. Grate some fresh nutmeg or ginger on top. Toss a dash of cinnamon in with the salt. The sky doesn't even begin to describe the limit. You really and truly cannot mess this up.

*A banged up one, not a nice one, and from an estate sale where you're rolling the dice a little, not an authorized dealer, but STILL it is just highway robbery in addition to, you know, a climate and public health crisis

** Follow the below recipe, but you'll have to do it on feel. I know not everyone feels comfortable doing this, but if you're good at grilling and willing to keep a watchful eye, it works great!

5-6 ripe peaches, chopped (this is about three cups of fruit)