Darren Bailey, who once raffled off a semiautomatic rifle, later apologized if he "diminished the pain" being felt 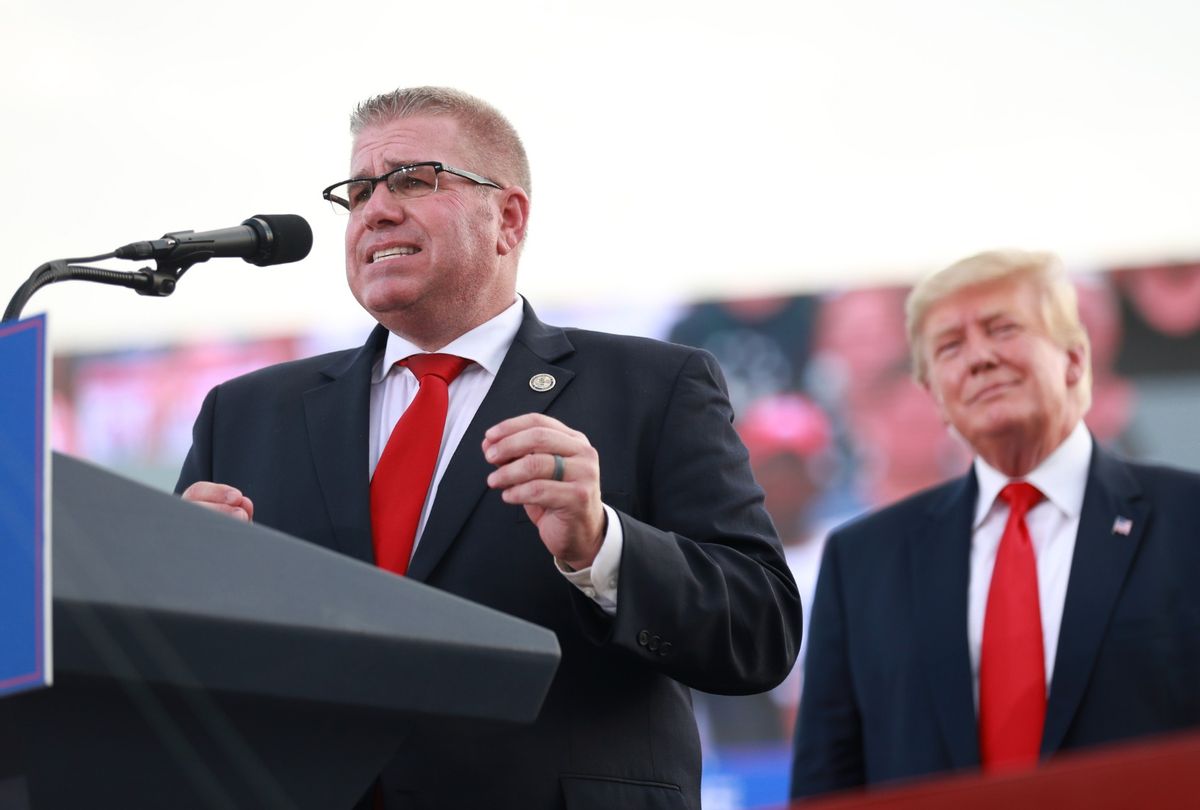 Illinois Gubernatorial hopeful Darren Bailey delivers remarks during a Save America Rally with former US President Donald Trump at the Adams County Fairgrounds on June 25, 2022 in Mendon, Illinois. (Michael B. Thomas/Getty Images)
--

Illinois Republican gubernatorial candidate Darren Bailey apologized on Monday after calling for people to "move on" just hours after a mass shooting at a July 4 parade in Highland Park.

At least 6 people were killed and 38 others were injured after a gunman using a high-powered rifle from a rooftop opened fire during the city's July 4 parade Monday morning, officials said. More than 50 shots were heard in videos posted online. Authorities later detained suspect Robert Crimo, 22, whose rifle was "legally obtained," Highland Park Mayor Nancy Rotering told NBC News on Tuesday. Crimo, who occasionally posted about former President Donald Trump and was photographed at a Trump rally and wearing a Trump flag as a cape, according to The Daily Beast, has not yet been charged.

Hours after the shooting, as the gunman was still at large, Trump-backed Republican gubernatorial candidate Darren Bailey posted a video to Facebook from Skokie, where he planned to attend a parade before it was canceled due to the shooting.

"Friends, let's pray for the law enforcement and even the organizers of this parade," Bailey said in the video. "The shooter is still at large. So let's pray for justice to prevail, and then let's move on and let's celebrate the independence of this nation."

Bailey, a state senator, later issued a statement apologizing if he "diminished the pain being felt across our state today."

"I am heartbroken by today's tragic events and the pain and loss felt by so many," he said. "My intent was to pray for the victims and those affected by today's tragedy and for the shooter to be caught and prosecuted without further loss."

Bailey on Twitter offered "heartfelt prayers" to the victims of the shooting and called for a special legislative session to "demand law and order and prosecute criminals."

"We need more police on our streets to keep our families safe," he wrote.

Bailey made no note of the role of guns in mass shootings. Bailey is an ardent gun supporter who previously held a raffle to give away a Hammerli TAC R1 22 rifle to raise money for his campaign.

Bailey's comments came days after he was endorsed by Trump and overwhelmingly won the state's Republican gubernatorial primary.

"Darren Bailey represents the worst of Donald Trump's agenda. Now with Trump's endorsement, Bailey is ready to bring the same dangerous policies to our state," Democratic Gov. JB Pritzker said on Twitter, vowing to serve as a "firewall against Trump's destructive agenda."

Pritzker after the shooting said he was "furious" that more lives were lost to gun violence.

"It is devastating that a celebration of America was ripped apart by our uniquely American plague," he said while visiting Highland Park. "It's the Fourth of July, a day for reflection on our freedoms," he added. "Our founders carried muskets, not assault weapons, and I don't think a single one of them would have said that you have a constitutional right to an assault weapon with a high-capacity magazine or that that is more important than the right of the people who attended this parade today to live."

Other state officials also condemned gun violence after the attack.

"To face senseless gun violence while out celebrating Independence Day is nothing short of horrific," tweeted Sen. Dick Durbin, D-Ill.

"Absolutely terrifying," wrote Sen. Tammy Duckworth, D-Ill. "Families from all over seek out this time-honored tradition on Fourth of July—and today, many found themselves running for their lives. Every community deserves to be safe from senseless gun violence."

Dr. David Baum, a physician who was at the parade and treated victims of the shooting, recalled bodies that were "literally blown up by these bullets" fired from a high-powered rifle that the gunman bought legally.

"I saw horrific, devastating injuries, the kind that you normally see in a war," he told The Daily Beast. "I don't think I need to describe the horrific nature of what the bullets did to those bodies, but it was horrific. As a physician for 33 years, blood doesn't bother me. But seeing people's heads blown up, and bodies eviscerated, would be disturbing to anyone who was there besides maybe a physician."