Progressives: Take the fight to the states, right now. It's the only way to win

Progressives have long mistrusted "states' rights" and looked to the federal government. That's all over now 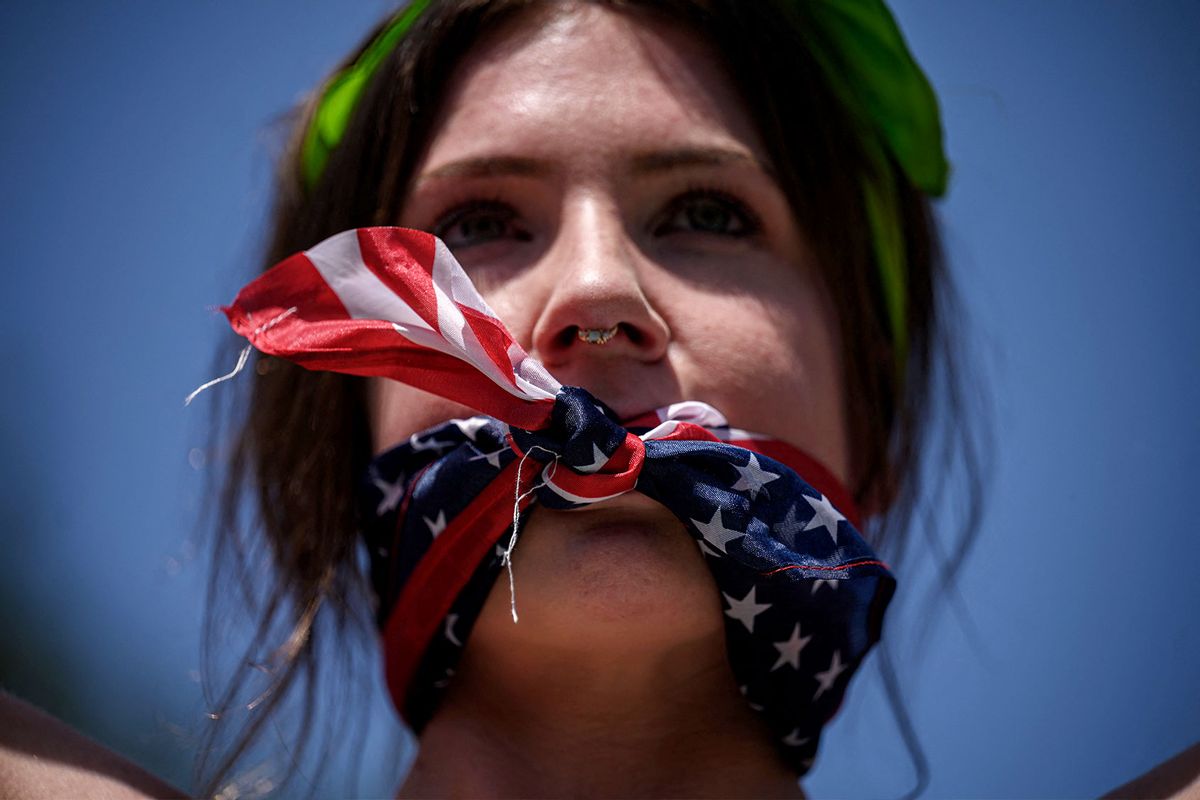 A reproductive rights activist, gagged by a scarf in the colors of the US flag, marches during a protest against a recent Supreme Court ruling on abortion rights, in New York, July 4, 2022. (ED JONES/AFP via Getty Images)
--

States are growing in power. This fact has never been clearer than after last week's Supreme Court decisions. Most obviously, Dobbs overturned Roe v. Wade and returned abortion laws back to the states. But now we also have decisions in Castro-Huerta, ruling that states can prosecute crimes on tribal land, which will shift prosecutions from federal to state governments, and West Virginia v. EPA, which will shift the frontlines of the climate battle back to the states.

Looking forward, just before the Fourth of July holiday the court announced it would take up the Independent State Legislature theory in the fall. The court may have the votes to endorse this theory, which would hand state legislatures complete and unfettered control over election administration. That could be a near-certain checkmate for Democrats in the 2024 election, given Republicans' gerrymandered control of state legislatures in Georgia, Pennsylvania, Wisconsin and elsewhere.

These decisions should shock no one. Eviscerating federal civil rights protections, dismantling the regulatory state and rigging election rules mark the culmination of a century of strategic power-building on the right — and the expansion of state power is at its core.

RELATED: After Roe v. Wade: Now the fight for reproductive justice moves to the states

For decades progressives have over-invested in federal strategies, including legislation, advocacy and litigation. While conservatives have been consistent and ruthless in their efforts to build power at different levels of government, progressives have almost entirely neglected state-level power. Now, with state power dramatically expanding, progressives are structurally and rhetorically unprepared.

It's time for progressives to challenge their thinking about state power. It's time to reject outdated and ahistorical nostalgia for a Supreme Court that stands on the side of rights and justice — something that only briefly and intermittently existed. It's time to embrace the fight for state power as a necessary part of the progressive project, and it's time to commit to reallocating energy and resources downward to political and policy battles in the states.

Dobbs, Castro-Huerta and West Virginia v. EPA are examples of a broader trend: the ascendancy of state power. Gridlock in Washington, an arch-conservative Supreme Court, and broad regulatory trends away from strong central control are all converging to enlarge the power of state government and state legislatures.

This confluence is not accidental. It has been decades in the making, the work of a strategic conservative project that has always been strongly connected not just to building state power, but to the idea of state power as a concept consistent with right-wing political ideology.

Conservatives have spent generations building an entire political apparatus designed to stack the courts with ideological judges. At the same time, they have focused on winning state legislative races, knowing that these overlooked venues of power are the key to redistricting and voting rights, and that once the judiciary had been captured by conservative ideology, it would give states more discretion to write regressive laws. Republican power in state capitals accelerated dramatically after the post-2010 gerrymandering strategy known as Project REDMAP, which resulted in Republican control of 25 state legislatures. There's a direct line between that state-level power and this wave of Supreme Court decisions, including the fall of Roe.

But while the right has woven state-level strategies into the very fabric of its efforts, the left has been almost exclusively preoccupied with federal strategies and an aversion to state-level power. For decades, Democrats prioritized federal elections over state-level races, and left-leaning interest groups — including national abortion advocacy organizations — often focused on federal strategies and institution-building, to the near exclusion of local and state ones.

Democrats have invested too much in unwinnable federal elections, and ceded control of the states to their opponents. That was always dumb, and now it's disastrous.

Democrats routinely invest far too much money in unwinnable federal elections, while underinvesting in state and local candidates who actually have a chance. FEC filings for federal candidates show that Democrats running in noncompetitive Senate races have raised more than $119 million for their 2022 races so far. To gain some perspective on that, in 2020 Arizona Democrats fell just four seats shy of flipping the state legislature, and raised less than $10 million. This year, Arizona's Republican trifecta — both houses of the state legislature, plus the governor — passed and enacted an abortion ban.

Progressives have long been wary of "states' rights" and federalism, for understandable historical reasons. As scholar Heather Gerken has explained, the idea of states' rights has repeatedly been invoked to defend abhorrent institutions, including slavery and Jim Crow. Therefore, progressives have looked to rights derived under the U.S. Constitution as the benchmark for establishing civil rights and other protections.

But by ceding both institutional and narrative control about the importance and value of state power to their opponents, progressives have directly aided the conservative cause. Progressives' staunch unwillingness to recognize the interdependence between state and federal power has created a false mutual exclusion between state and federal power-building efforts. That was never a good choice, and now it's disastrous. We have to build power, sustain it and wield it at both levels of government. We're behind, and we've got to work fast.

A different approach is necessary: Progressives now have to push beyond the false choice between building federal and state power. We can organize and advocate for electoral, policy and doctrinal victories at the federal level, and celebrate them. At the same time, we can also build state power, which is just as important. We can understand that both federal and state power are necessary to achieve progressive goals. That understanding can and must fuel a massive redistribution of progressive efforts, strategy and resources toward our states — beginning immediately.

Dobbs, Castro-Huerta and EPA are not the end of the Supreme Court's plans to reshape American law and life. If, as Justice Alito claims, the right to abortion is not "deeply rooted" in tradition, then the right to contraception, to marriage equality, and even to engage in consensual adult sexual activity are on the chopping block next. Limiting regulatory agencies' abilities to address pressing issues to the letter of Congress' enabling legislation — in a moment when gridlock makes any federal legislation nearly impossible — will slow or halt federal progress in climate change, health care, worker safety and more. As state power grows more important, we must embrace its positive potential to achieve the protections and conditions we desire.

As we prepare for battle at the state level, let's be clear-eyed about the work ahead. Let's embrace the fight for state power as a vital and necessary part of the progressive project. State and federal power exist in interdependence, and we must pledge to build power at both levels. Let us reimagine what our states could do for us, envision them as expansive and transformative venues of positive power, and demand that our states create the conditions in which reproductive justice, climate justice and so much more can be achieved.

Read more on state legislatures and the fight for the future: