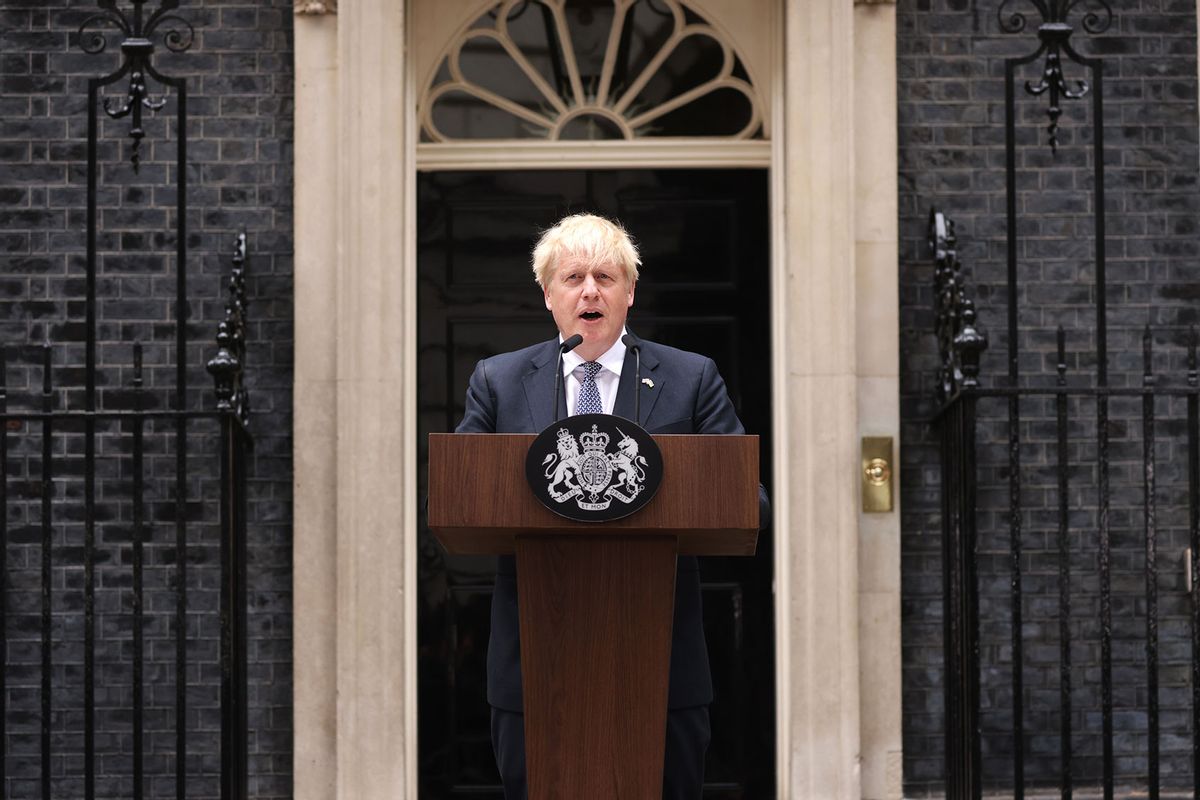 Prime Minister Boris Johnson addresses the nation as he announces his resignation outside 10 Downing Street, on July 7, 2022 in London, England. After a turbulent term in office, Boris Johnson will resign from his roles as Conservative Party Leader and Prime Minister today after coming under pressure from his party. (Dan Kitwood/Getty Images)
--

British Prime Minister Boris Johnson announced his resignation Thursday after dozens of his government ministers stepped down earlier this week, jumping ship as the U.K. leader was engulfed by scandal, backlash over skyrocketing costs of living and other crises.

As the Associated Press summarized the situation, Johnson "managed to remain in power for almost three years, despite allegations that he was too close to party donors, that he protected supporters from bullying and corruption allegations, and that he misled Parliament and was dishonest to the public about government office parties that broke pandemic lockdown rules."

"But recent disclosures that Johnson knew about sexual misconduct allegations against Chris Pincher, a Conservative lawmaker, before he promoted Pincher to a senior position turned out to be the last straw," the AP added.

Johnson, who has also come under fire for badly mismanaging the U.K.'s coronavirus response and working against diplomatic efforts in Ukraine, said Thursday that he intends to stay on as a caretaker prime minister until a successor is chosen.

"I want to tell you how sorry I am to be giving up the best job in the world," Johnson told a crowd outside 10 Downing Street. "But them's the breaks."

With the resignation highly anticipated, progressive critics over recent days have said Johnson's ignoble ouster would be a fitting end for the right-wing politician reviled by so many.

Nicola Sturgeon, first minister of Scotland, questioned whether it is "sustainable" for Johnson to remain prime minister until the fall.

"Boris Johnson was always manifestly unfit to be PM and the Tories should never have elected him leader or sustained him in office for as long as they have," Sturgeon said. "But the problems run much deeper than one individual. The Westminster system is broken."

In a statement, Labour Party leader Keir Starmer declared that "it is good news for the country that Boris Johnson has resigned as prime minister."

"But it should have happened long ago," said Starmer. "He was always unfit for office. He has been responsible for lies, scandal, and fraud on an industrial scale. And all those who have been complicit should be utterly ashamed. The Tory Party have inflicted chaos upon the country during the worst cost of living crisis in decades. And they cannot now pretend they are the ones to sort it out."

"We don't need to change the Tory at the top — we need a proper change of government," he added. "We need a fresh start for Britain."

Former Labour leader Jeremy Corbyn sent a similar message earlier this week, writing on Twitter that "12 years of cruel Tory rule" have been "inflicting pain for the many to feather the beds of the few."

"Johnson should resign now," Corbyn added, "but real change can only come when the Tories are swept away and replaced with a people's government to redistribute wealth and power."