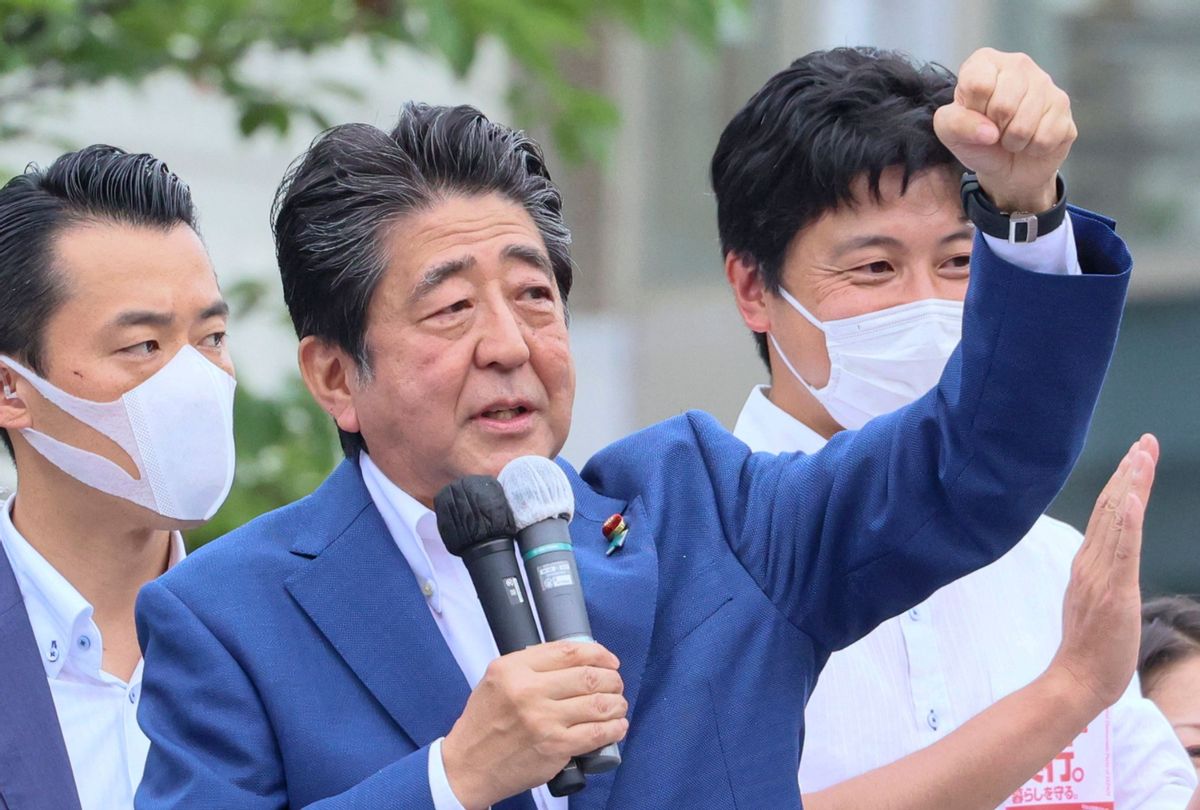 Former Japanese Prime Minister Shinzo Abe was assassinated during a speech on Friday with a weapon that appeared to be homemade. The suspect said he intended to target a senior official of a religious group who was not present at the event, according to the Mainichi, a major Japanese newspaper.

Abe, 67, was campaigning for another politician in Nara, a city near Osaka, when a gunman shot him from behind with a shotgun-style weapon that appeared to be homemade, according to Japanese news outlet NHK. Abe was taken to the hospital and later pronounced dead.

Abe died from excessive bleeding and the bullet went "deep enough to reach his heart," doctors at Nara Medical University said during a press conference.

Police arrested Tetsuya Yamagami, 41, on the scene. Video showed authorities wrestle him to the ground after the shooting.

The suspect admitted that he shot Abe but told police he "intended to target" a senior official of a specific religious group, according to The Mainichi, which did not specify the group. The official was not on the scene at the time.

"At the same time, the suspect has made nonsensical statements, and Nara Prefectural Police are carefully investigating whether he is mentally competent to be held criminally responsible," the outlet reported.

Yamagami was a member of the Japan Maritime Self-Defence Force for three years, a defense official told reporters.

Abe, a Japanese nationalist, was the country's longest-serving prime minister whose popularity rose after he resigned in 2020 due to health problems. He has remained a prominent political leader and frequently campaigned for other members of his party.

"To lose such a figure in this manner is absolutely devastating," Kishida said during an emotional press conference after the attack, vowing to go ahead with upper house elections on Sunday with beefed-up security.

"Elections are the foundation of democracy, which we must defend," he said. "We cannot give in to violence. For this reason, we will continue to fight the election campaign until the very end. I hope the people of Japan will think about and work hard to protect this democracy."

Japan has a history of political attacks. Former Nagasaki Mayor Ito Itcho was assassinated by a gunman in 2007. Former Prime Minister Morihiro Hosokawa was shot in 1994 but survived.

Guns are severely restricted in Japan and gun violence is incredibly rare. There were just 10 shootings in Japan last year, eight of which were related to the yakuza, the Japanese criminal network, according to the National Police Agency. Only one person died from gun violence in the country last year.

The assassin's weapon did not appear to be a standard firearm.

"The box-like device is wrapped in black tape and smoke can be seen coming from the muzzle. It's certainly no standard shotgun," a former police detective told The Daily Beast after reviewing photos of the weapon.

"It's not only rare, but it's really culturally unfathomable," Snow said. "The Japanese people can't imagine having a gun culture like we have in the United States. This is a speechless moment. I really feel at a loss for words. I pray for the best for the former prime minister. What this will do to the national psyche of a people who move about freely and have a social contract with each other, that they will not resort to this type of violence … I am devastated thinking about that."

Abe was a vocal critic of China and sought to build close relations with the United States and former President Donald Trump. He stepped down before President Joe Biden took office.

"We are shocked and saddened to hear about the violent attack against former Japanese Prime Minister Shinzo Abe," The White House said in a statement. "We are closely monitoring the reports and keeping our thoughts with his family and the people of Japan."

"We are all saddened and shocked by the shooting of former Prime Minister Abe Shinzo," echoed Rahm Emanuel, the U.S. ambassador to Japan. "Abe-san has been an outstanding leader of Japan and unwavering ally of the U.S."

about Abe and the US