Moment of truth for labor? AFL-CIO still backing an anti-choice Republican in N.J. 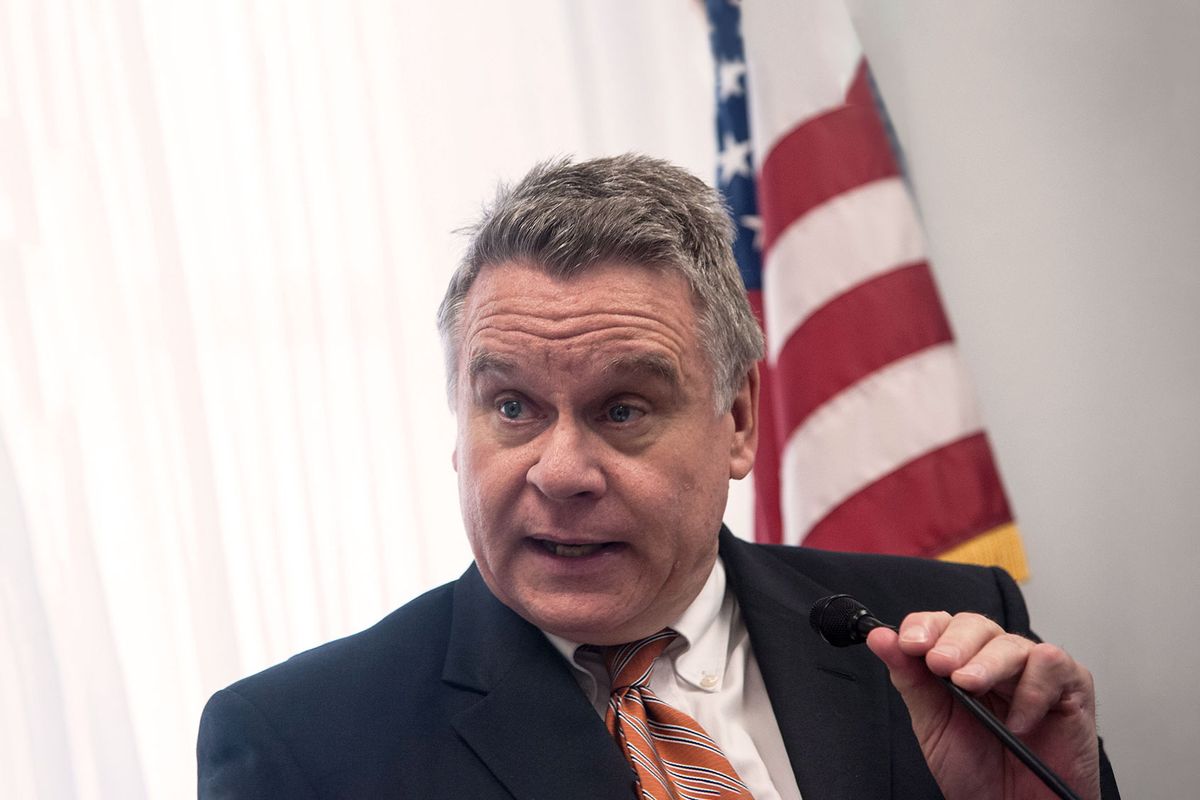 Several weeks ahead of Labor Day, it appears that despite the great national tumult over the Supreme Court's overturning of the Roe v. Wade decision, longtime "pro-life" Rep. Chris Smith, a New Jersey Republican is likely to survive the earnest challenge from a much younger Democratic opponent, small businessman Matthew Jenkins.

Smith's strong position flies in the face of New Jersey polling by Rutgers Eagleton, which found that even before the Supreme Court's Dobbs decision, two-thirds of the state's voters surveyed were worried about the fallout, with a majority of voters saying they wanted New Jersey to pass laws to make it easier to access abortion:

Over half (54 percent) would generally like to see New Jersey pass laws that protect and expand access to abortion care, while 25 percent would like to see the state make it more difficult to get an abortion; 11 percent choose neither option, and 9 percent are unsure. Four in ten New Jerseyans say they would be more likely to vote for a candidate running for office in New Jersey who supports the Reproductive Freedom Act — double the number who say they would be less likely to do so (21 percent). Just over a quarter (28 percent) say it would make no difference to their vote, and 11 percent are unsure.

"Abortion rights have always had support in New Jersey for as long as the Rutgers-Eagleton Poll has asked the issue," said Ashley Koning, an assistant research professor and director of the Eagleton Center for Public Interest Polling (ECPIP) at Rutgers University–New Brunswick. "In fact, New Jerseyans have continually been opposed to any state laws restricting abortion access for the past about three decades."

Workers have had enough: Labor's tide is rising, from Amazon to Dollar General and beyond

At least Chris Smith has been true to form. On his congressional website right after the Supreme Court's controversial decision came down, Smith heralded the end of Roe.

"There is nothing humane, compassionate or benign about abortion," he wrote. "Abortion is not healthcare, unless one construes the precious life of an unborn child to be analogous to a tumor to be excised or a disease to be vanquished."

He continued. "The 1973 Supreme Court anti-child decisions and several that followed like Casey have enabled the violent death of unborn baby girls and boys by dismemberment, decapitation, forced expulsion from the womb, deadly poisons, and other violent methods at any time and for any reason until birth."

A call to Smith's press office was not returned.

Decade in and decade out, Smith has sailed to re-election with more 60 percent of the vote in New Jersey's 4th district, a largely red suburban area in a state that's become increasingly blue. In the 2018 wave election when Democrats took back the House of Representatives, Smith's Democratic challenger, Joshua Welle, managed to break 43 percent, drawing 127,000 votes.

While Smith has been one of Congress' most zealous critics of abortion, thanks to his opposition to so-called free trade and his pro-labor votes, he has enjoyed the consistent support of New Jersey's AFL-CIO. Last month, the state's largest umbrella union once again endorsed him, along with former Democrat Rep. Jeff Van Drew, who switched parties in 2019 to pledge his allegiance to Donald Trump.

"For me, the cause of working families and the critical importance of unions in the never-ending fight for fair wages and benefits, workplace protections and other important terms of employment achieved through collective bargaining is a core conviction," Smith said in 2020 when he got the NJ AFL-CIO endorsement… "My father was a teamster and instilled in me the strong belief that without unions working families would be marginalized, divided and exploited. Unions even the playing field and make both the workplace and America itself more just and fair."

Conventional wisdom in the labor movement holds that you don't bet against an incumbent — and for 50 years, unions have avoided picking a side in the abortion debate.

In some respects this is easy to explain. Conventional wisdom within the labor movement holds that betting against a congressional incumbent is a fool's errand and that it's incumbents who can deliver results for members. Historically, the nation's labor movement has counted on an alliance with the Catholic Church, both locally and nationally, on issues related to immigrants' rights as well as labor rights. For the half-century that Roe was the law of the land, unions have successfully avoided having to pick a side in the abortion debate.

Now, however, with access to abortion no longer guaranteed, pro-choice women in the labor movement and their male allies contend that reproductive rights are foundational to labor rights, and the movement's historic neutrality may be harder to maintain.  Right after the leaked Roe opinion surfaced, Liz Shuler, the AFL-CIO's newly elected national president, tweeted: "Access to health care without fear and intimidation is every person's right. We must be able to control our own bodies — which has a direct impact on economic justice and the ability of working people to make a better life for themselves and their families."

Kyle Bragg, the president of SEIU 32 BJ, which represents 135,000 workers, called the leaked draft opinion overturning Roe "a massive and sickening step backwards in this country," in a statement released before the Dobbs decision. Bragg said the decision "would inflict the largest rollback of basic rights in a generation and unwind decades of progress for women. The justification for this opinion rests on a medieval worldview and it sets the stage for an even larger assault on fundamental freedoms and protections. It's an opinion cooked up by an illegitimate majority who advances a vision of America that caters only to Christian straight white men. What an utter disgrace."

Up until the Roe reversal, most political analysts projected that Democrats, buffeted by inflation and President Biden's unpopularity, were almost certain to lose control of Congress in the fall. Bloomberg News reports, however, that more recent polling by Morning Consult/Politico indicates the overturning of Roe could "energize" Democrats, asserting that "half of U.S. voters support the abortion rights guaranteed by Roe and don't want the Supreme Court to overturn the ruling."

Bloomberg's report continued: "About 42% of voters who lean Democratic — and 45% of Democratic women — said it's more important to vote for a candidate who agrees with their stance on abortion, even if they disagree on other issues. That number has increased by five points since last December." By contrast, only 31 percent of Republican voters polled thought that abortion was more important than other issues in the midterm elections for Congress and other offices.

"That trend reverses more than a decade of polling that showed Republicans have been more motivated by the abortion issue," Bloomberg News said. "Last year, Gallup found that 30% of self-described 'pro-life' voters said they would only vote for a candidate who shares their views on abortion, compared to 19% of those who support abortion rights."

According to his campaign website, Jenkins attended Ocean County College and worked as a substitute teacher before completing a degree in biochemistry and molecular =biology at Rutgers University in New Brunswick. His site lists "generational change, making New Jersey work for working families, fighting for women's rights, LGBTQIA+ issues, health care and energy and climate change as his core issues.

Jenkins' odds are long. In 2020, Smith's Democratic opponent was held to 38.3 percent of the vote, even as Biden defeated Donald Trump by close to a million votes statewide. Smith's district includes Ocean County, one of the reddest parts of New Jersey, where Trump won close to 64 percent of the ballots cast. The latest redistricting has made Jenkins' uphill climb even steeper. The 4th district now comprises 36 percent registered Republicans, 23 percent Democrats and 40 percent who are listed as unaffiliated voters. The reconfigured district has lost some of the Trenton suburbs in eastern Mercer County, traditionally friendlier to Democrats.

Smith was among the 35 Republicans who voted for a Jan. 6 commission. Last month he survived a challenge by a pro-Trump podcaster who was backed by Michael Flynn, Rudy Giuliani and Roger Stone.

In last month's Republican primary, Smith was challenged by Trump acolyte Mike Crispi, a podcast host who had the backing of retired Gen. Michael Flynn, Rudy Giuliani and Roger Stone. Smith defeated him by close to 12,000 votes out of 52,000 cast. Smith had earned Trump World's ire as one of only one of 35 Republicans to vote for a 9/11-style commission to investigate the Jan. 6 insurrection. That measure passed the House and had the endorsement of former Rep. Lee Hamilton and former New Jersey Gov. Tom Kean, co-chairs of the 9/11 Commission, but died in the U.S. Senate.

Smith was first elected to Congress in 1980 when the district was configured differently, including the shore towns in Monmouth and Ocean counties, and going as far west as the state capital of Trenton, where Smith grew up and his family operated a wholesale sporting goods business. He had held no elected office prior to his running for Congress but in 1976 became executive director of the New Jersey Right to Life Committee. He won election his first time out, beating veteran Democratic incumbent Rep. Frank Thompson — who had held the seat since 1954 — by 27,000 votes.

Over the course of Thompson's 26 years in the House he had been a champion of civil and labor rights and was among the architects of the landmark Landrum-Griffin Act, a bill of rights for rank-and-file union members that promoted transparency and democracy in the way unions operate. He spearheaded John F. Kennedy's voter registration efforts in the 1960 election, which saw 91 percent of New Jersey's voters turn out, an historic high.

But in June of 1980, before the campaign got into full swing, Thompson was indicted on federal corruption charges in the FBI's Abscam sting. That controversial corruption probe also snagged Sen. Harrison Williams as well as a half-dozen members of the House, including Thompson — who was convicted in December, a month after voters had rejected him at the polls. Chris Smith has been in office ever since.

about the labor movement's comeback