"Nothing short of a death sentence" 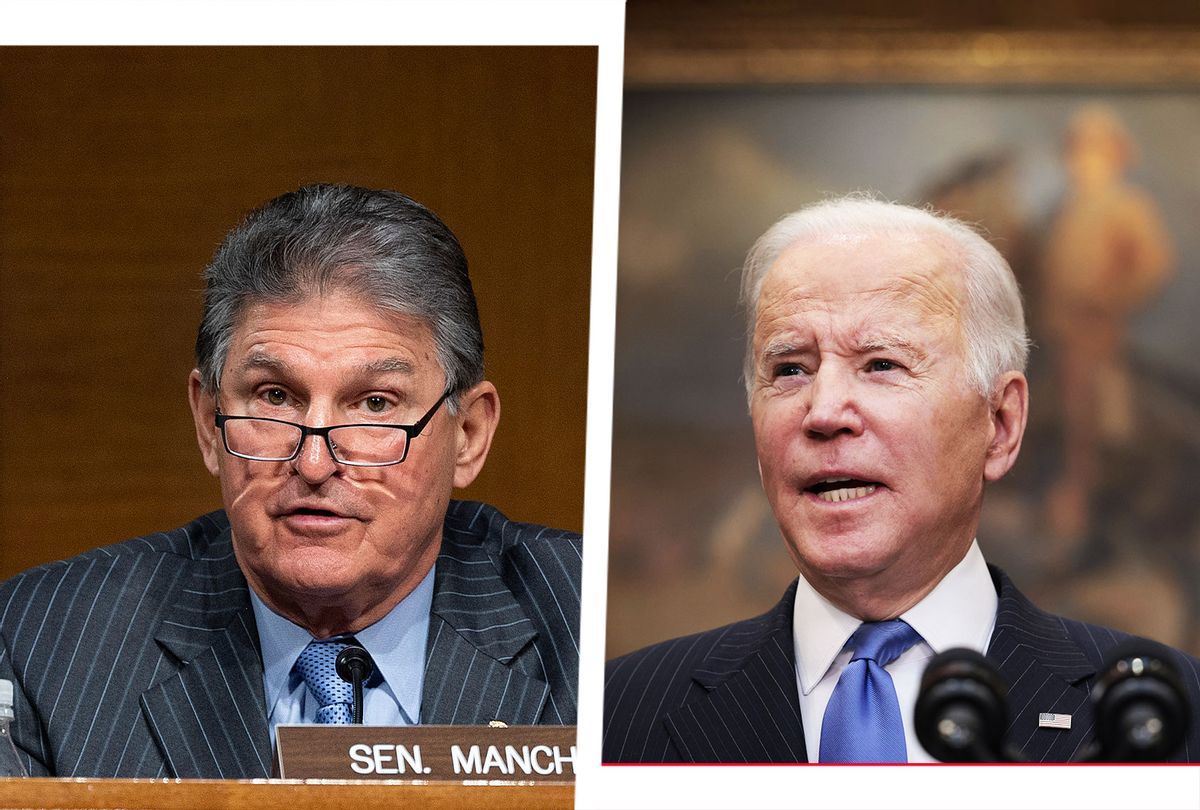 Sen. Joe Manchin of West Virginia informed Democratic leaders Thursday that he will not support any new climate spending or tax increases targeting the wealthy and large corporations, sinking his party's revived push for renewable energy investments and further undercutting the country's ability to rein in carbon emissions.

While Manchin's refusal to endorse green energy funding may have been entirely foreseeable given his close ties to the fossil fuel industry and his role in tanking the Build Back Better package just months earlier, climate advocates nevertheless voiced dismay at the power one individual has been able to exert over a process with implications for billions of people across the planet.

"Biden must declare a climate emergency, and do everything in his executive power to stop the climate crisis immediately."

"This is nothing short of a death sentence," warned Varshini Prakash, executive director of the youth-led Sunrise Movement. "Our democracy is broken when one man who profits from the fossil fuel industry can defy the 81 million Americans who voted for Democrats to stop the climate crisis. It's clear appealing to corporate obstructionists doesn't work, and it will cost us a generation of voters."

Manchin's position, which he reportedly laid out during a closed-door meeting with the Democratic leadership on Thursday, marks a huge setback for the majority party's last-ditch attempt to assemble a far more limited reconciliation bill ahead of the pivotal midterm elections, in which Democrats' slim majorities in the House and Senate are at risk.

The Washington Post, the first outlet to report on the West Virginia Democrat's stance, noted that party leaders had already "agreed to surrender their most prized spending proposals, from offering paid family and medical leave to providing child care, free prekindergarten, and tax benefits to low-income Americans" in a bid to win Manchin's support, which is necessary to get a reconciliation package through the Senate.

"In more recent talks," the Post added, "[Senate Majority Leader Chuck] Schumer and his colleagues set about trying to woo the longtime holdout over a scaled-back approach—including tax credits to spur clean energy, incentives to encourage the purchase of electric vehicles, and limited penalties on the producers of harmful methane gas."

Sen. Ron Wyden (D-Ore.), chair of the Senate Finance Committee, told the newspaper that the collapse of climate talks is a devastating failure.

"I'm not going to sugarcoat my disappointment here, especially since nearly all issues in the climate and energy space had been resolved," said Wyden. "This is our last chance to prevent the most catastrophic—and costly—effects of climate change. We can't come back in another decade and forestall hundreds of billions—if not trillions—in economic damage and undo the inevitable human toll."

With new climate and tax provisions off the table, Manchin reportedly told top Democrats that he's open to letting Medicare negotiate the prices of a small number of prescription drugs and extending Affordable Care Act subsidies that are set to lapse in the coming months, which would mean surging premiums for millions of people.

The removal of climate provisions from the nascent legislative package is disastrous for U.S. efforts to bring carbon emissions into line with international targets and transition the country away from fossil fuels, the primary driver of the climate crisis.

But it's a major victory for the powerful and deep-pocketed oil and gas industry, which has been lobbying aggressively against renewable energy spending.

"Manchin has taken more money from the fossil fuel industry than anyone else in D.C.," noted Bill McKibben, co-founder of 350.org. "And the return on that investment has been enormous. Big Oil got its money's worth a thousand times over."

Morris Pearl, chair of the Patriotic Millionaires—a group that advocates for higher taxes on the wealthy—said Thursday that "Manchin just handed victory in America's class war to the billionaires."

"He's shown he doesn't care about the American people, he only cares about the tiny wealthy minority of Americans who are opposed to rich people (like his family and friends who own the coal mining industry) paying taxes," Pearl added. "Some may be ignorant, some may be corrupt, all are just sad pawns in the oligarchs' takeover of America."

The closure, for now, of legislative paths toward climate action spurred fresh calls for President Joe Biden to do everything he can through executive action.

Sen. Sheldon Whitehouse (D-R.I.) tweeted late Thursday that "it's now time for executive Beast Mode" from the president, who has thus far resisted pressure to declare a climate emergency and take other steps to mobilize federal resources to combat a crisis whose deadly consequences are becoming more evident by the day.

"Do it all and start it now," Whitehouse demanded.

In a press release, the Sunrise Movement outlined a list of actions Biden could take without needing congressional approval:

"We won't stop fighting," said Prakash. "Biden must declare a climate emergency, and do everything in his executive power to stop the climate crisis immediately. That's the only way he can salvage his presidency and save our generation. And we must uproot this broken system and rebuild it to work for us."