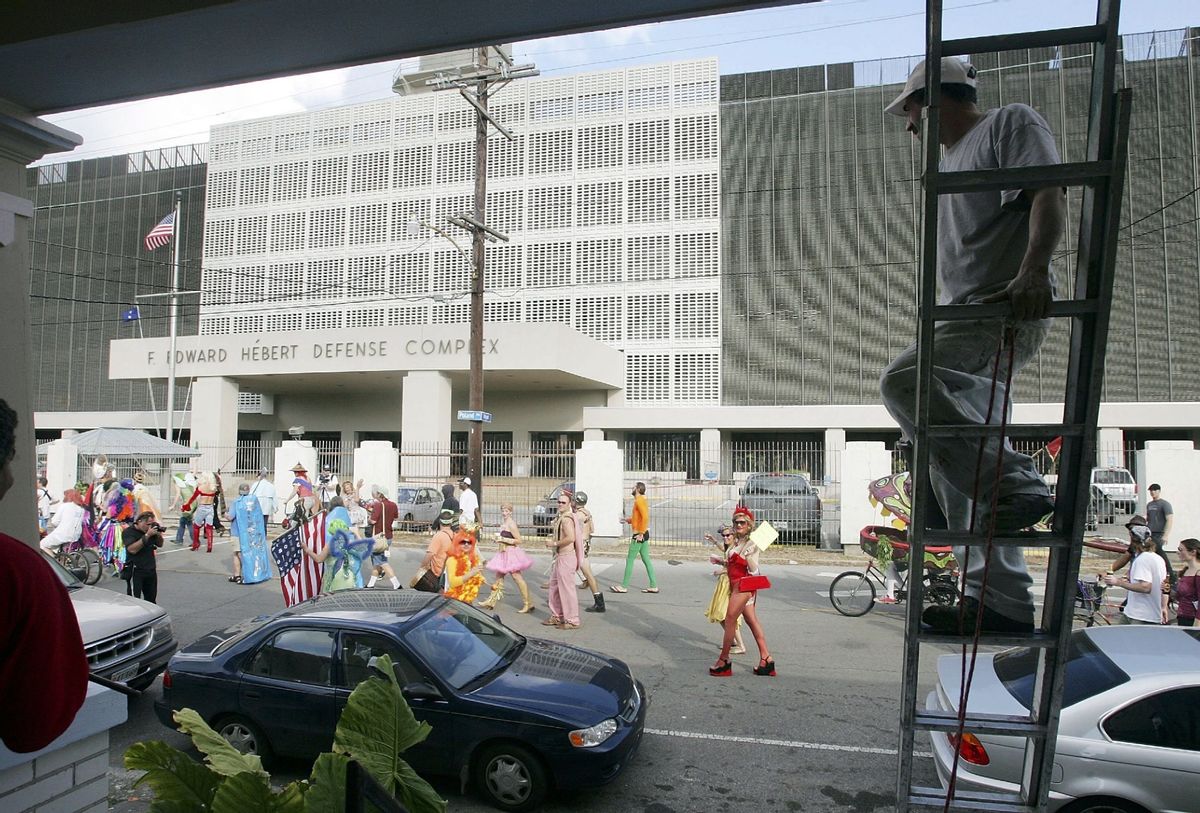 On Monday, New Orleans began its latest attempt to clear and secure the massive blighted Navy base that's stood vacant in the Bywater area of the city for over a decade.

The base dates back to 1919 and was, at one time, used as a supply depot for the U.S. Army, according to Nola.com. In 1966 it took on new use by the Navy and then fell under ownership of the city in 2013. Up until this week, the 25-acre property was home to hundreds of unhoused people, who city officials and volunteers are attempting to clear out, with varying results and no provided alternative as to where they should relocate to.

On Monday morning, Andrés Fuentes, a journalist for FOX 8 New Orleans, shared video footage of a SWAT team assisting with the first sweep of the base, with a parade of unhoused people carrying whatever they could as they left the area in search of their next home.

"Dozens of people have left the abandoned Navy base in the Bywater as a SWAT truck loads up to sweep more of the property," Fuentes tweeted. "New Orleans leaders say they want to secure the area in order to make way for redevelopment."

Sobering lessons in untying the knot of a homeless crisis

Officials from the Office of Economic Development are working with NOPD alongside Mayor LaToya Cantrell to clear and secure the base to make way for developer Joe Jaeger's plan to renovate and repurpose the base into affordable housing apartments with attached retail properties, but locals have been hearing similar plans for years now, as the base falls further into blight.

On Friday, days after the first big sweep of the base, a fire broke out on one of the upper levels. It's presumed that the fire was caused by someone trespassing on the property, but the NOLA fire department has not yet released details, according to Nola.com.

"Wow, four days after the city of New Orleans declared the abandoned Navy base in the Bywater closed, firefighters battle a one-alarm fire at the complex. The base was supposed to be emptied and secured by 3 guards 24/7," Paul Murphy, an eyewitness reporter for WWLTV tweeted along with NOFD photos of the interior of the Navy base after the fire was extinguished.

The abandoned Navy base has, for years, been a none-too-proud tourist attraction for explorers, documentarians and brave lookie-loos. In 2018, the popular YouTube exploration channel called The Proper People posted a nearly 20-minute video of their tour of the base, which is something you'd have to see to believe. The hulk of the structure, in the state that it's in, is nothing short of haunting.

Although locals are eager for the base to be secured in some way, and even more eager for it to be put to some good use, the fact that there is little to no assistance available for houseless, drug-addicted, or mentally ill inhabitants of the base, or the city in general, leaves the situation with more problems than solutions.

"There's been dead bodies, there've been raves at the site," Bywater Neighborhood Association President John Guarnieri said in a quote to WWLTV. "There's no security. There are drug users there. There's been drug paraphernalia all over the site."

"So where are they providing 100 free or affordable housing units to house the people who live here once they are displaced?" The Anti-Racist South Twitter account wrote after Monday's first sweep of the base.  "What's the plan? Just take people away from their only shelter and then… what?"