A recent Census survey found that 7.4 million Americans are currently behind on rent 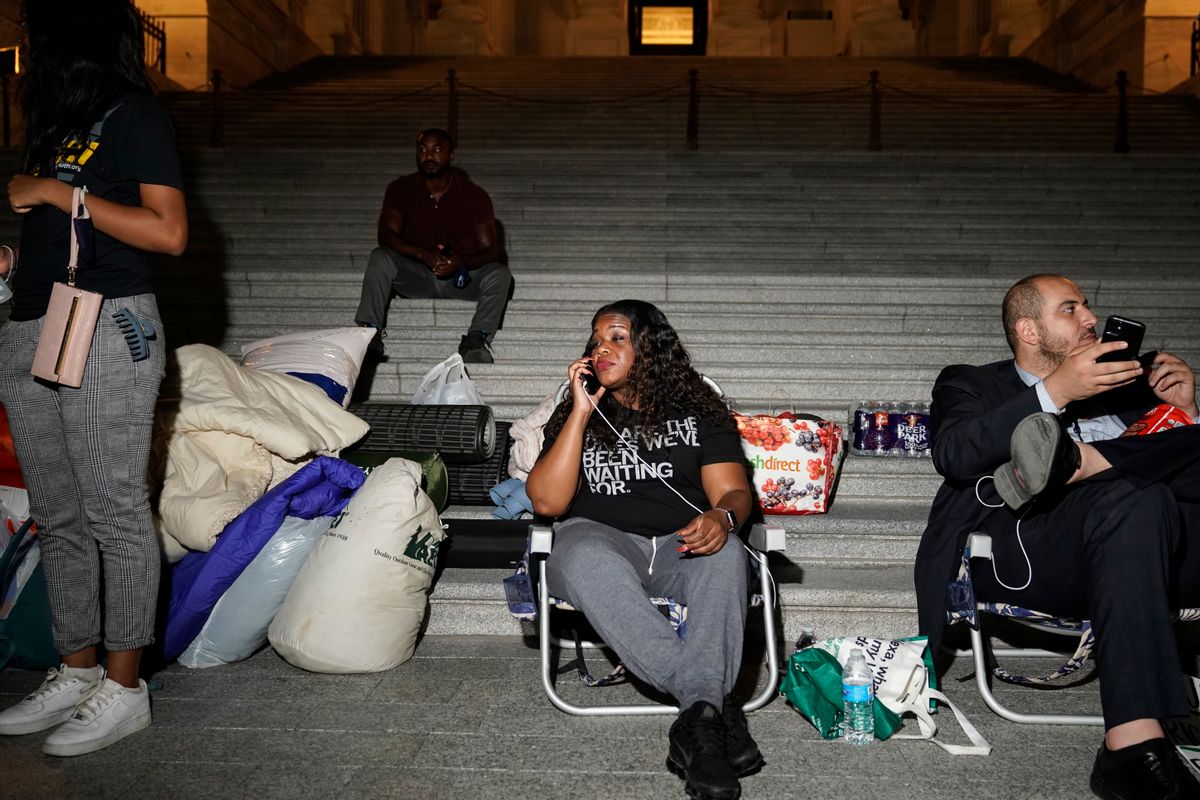 Rep. Cori Bush speaks with supporters as she spends the night outside the U.S. Capitol to call for for an extension of the federal eviction moratorium on July 31, 2021. (Getty Images)
--

A federal eviction moratorium expired Saturday at midnight after a full day of scrambling in Congress on Friday to extend the deadline — with the policy sunset, along with a failure to provide desperately needed emergency rental aid, putting millions of Americans at risk of losing their homes.

The news also comes just as the delta COVID-19 variant continues to vex public health efforts across the country.

Congressional Democrats blasted the White House — which waited until Thursday to announce that it would not attempt to extend the program due to potential legal challenges — for providing insufficient notice ahead of the deadline.

Speaker Nancy Pelosi released statement Friday, saying her caucus had really "only learned about this yesterday." Others were more pointed.

"The fact that this statement came out just yesterday is unacceptable," Rep. Alexandria Ocasio-Cortez, D-N.Y., told reporters Friday. "I want to make that very clear. Because the excuses that we've been hearing about it, I do not accept them."

The eviction moratorium had been bogged down for months in court, which ultimately resulted in a Supreme Court ruling last month that said the current eviction ban would expire July 31 unless an extension was approved by Congress.

In a joint statement with House Majority Leader Steny Hoyer, Pelosi also blamed Republicans for being unwilling to consider an extension to the program on short notice.

"It is extremely disappointing that House and Senate Republicans have refused to work with us on this issue," they wrote. "We strongly urge them to reconsider their opposition to helping millions of Americans and instead join with us to help renters and landlords hit hardest by the pandemic and prevent a nationwide eviction crisis."

The freeze was originally enacted by the Centers for Disease Control last September as a precautionary COVID-19 measure. President Joe Biden decided to extend the program in March — sparking a protracted court battle.

White House Press Secretary Jen Psaki said Thursday that the administration would have liked to take action, but "unfortunately the Supreme Court has made clear that this option is no longer available."

Members of the House's left-leaning "Squad" staged a protest at the Capitol Friday, and Rep. Cori Bush of Missouri — who was once homeless herself — spent the night on the Capitol steps.

"I know what it's like to wonder if I'm going to get that eviction notice," she said. "Your whole life turns upside down, and that's what's going to happen to seven million people over the course of the next few weeks."

Industry groups, like the powerful National Association of Realtors, have objected to any extension of the national eviction freeze. A group of organizations told lawmakers Friday that the policy hit small-time landlords especially hard, those who "continue to pay mortgages, taxes, insurance and maintain the safety of their properties for tenants with less or, in many cases, no rental income," according to a letter obtained by POLITICO.

The most recent Census pulse survey, administered during the final week of June and first week of July, found that 7.4 million Americans were behind on rent, while another Census survey released earlier this month found that 3.6 million people say they're facing eviction in the next 60 days.