Abortion, racism and guns: How white supremacy unites the right

Do things change? An early version of the racist "great replacement" theory drove the campaign to outlaw abortion 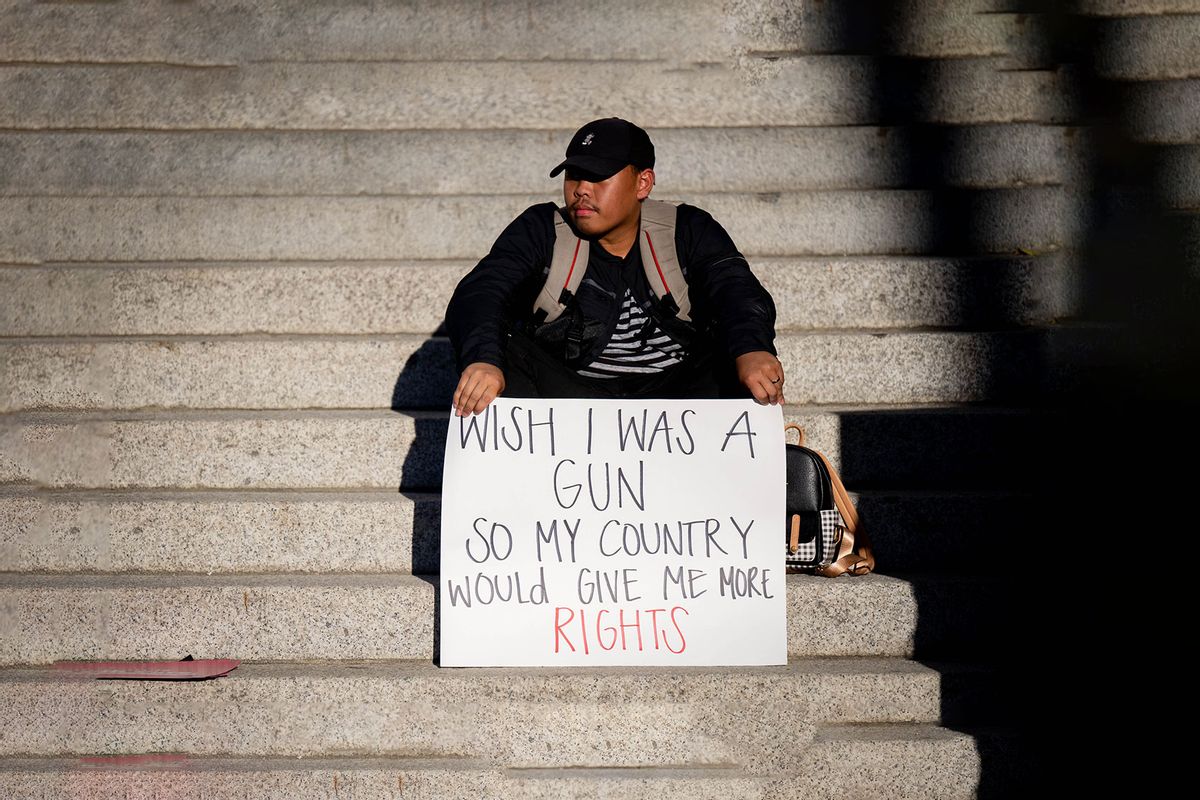 White supremacy was one of the primary motivations behind the first movement to outlaw abortion in the United States. In 1858, the American Medical Association (AMA), led by Horatio Storer, launched a crusade to end abortion across the country. Prior to this period, abortion was legal in all U.S. states. Storer and white male physicians not only wanted to push women midwives — often Black, indigenous and immigrant women — out of the newly developing medical profession, but also had another, more sinister aim: these men wanted white male Protestants to politically control the country.

They feared that the growing number of immigrants from Ireland, Italy, Germany and other largely Catholic countries, whom they viewed as separate and distinct "races," would produce more babies and usurp the political dominance of white Protestant Anglo-Saxon men. The reproduction of Black women, the majority of whom were enslaved at that time, was controlled by systems of white supremacy, and was not seen as a threat. Later, at the turn of the century, the focus shifted to the reproduction of women of color, many of whom were subjected to forced and coerced sterilizations in the U.S. until 1973. The white supremacist core of the movement remained the same, however.

After Buffalo: Is white America ashamed — or has it already forgotten?

It's important to understand that the definition of "whiteness" did not remain constant throughout that period. In the early 20th century, immigration restrictions created the conditions for consolidating the category "white," while massive immigration a few decades earlier, in the 19th century, had fragmented it. Political scientist Rogers M. Smith argues that this led to the destabilization and fracturing of the category "white," and to its replacement by a racial scheme in which the white races of Europe were considered separate and differently suited for citizenship. Many Anglo-Saxons in the U.S. believed them to be inferior races who threatened the country.

With white supremacy perceived to be under threat by some, its approach and rhetoric shifted. Storer lamented a perceived decline in the white birthrate in 1867, writing that "it has been found of late years that the increase of the population, or the excess of the births over the deaths, has been wholly of those of recent foreign origin." Between 1851 and 1880, almost 5 million immigrants arrived in the U.S., and the rate of immigration increased further in the following two decades. The 1860 census counted 31.4 million Americans, slightly more than 4 million of them foreign-born. Of these, 1.6 million had been born in Ireland and almost 1.3 million in Germany. Physician J.T. Cook argued in 1868 that "the Anglo-Saxon race is rapidly dying out … and the Germans, and Irish, and Swedes … are fast taking the country … by the sheer force of their ever increasing armies of babies…"

According to Storer and company, the problem was abortion: Specifically, too many white Anglo-Saxon women were choosing to terminate pregnancies. In the late 1800s, the New York Times ran stories about abortions performed by Ann Trow Lohman, also known as Madame Restell, who served New York's elite and ran a lucrative mail-order abortifacient business. She became so associated with abortion that the practice was often referred to as "Restellism." As one anti-abortion pundit noted: "Restellism is murder with the Roman Catholics. Half a dozen children in every Irish family. Only two in the modern American family. What is the matter? Answer — Restellism. That is why, shortly, the children of the Emerald Isle will be walking through the graveyards of the Puritans." How did Storer and the AMA decide to solve this "problem"? By criminalizing abortion.

In the 1890s, Anglo-Saxon women and their "guilty husbands" were implored to "stop murdering their children, and stop trying to defeat nature."

In anti-abortion tracts and pamphlets, Storer implored Anglo-Saxon women (and their "guilty husbands") to "stop murdering their children, and stop trying to defeat nature in any way, so that our American homes may again become populous with incipient citizens and voters, and incipient mothers of citizens and voters, and so that the American family shall not become an extinct institution in this country." Storer and the AMA were successful, and by 1890 almost every state had passed laws criminalizing abortion. Unsurprisingly, most gave physicians sole authority to decide when abortion was medically necessary. Many of these laws remained unchanged until vacated by the Supreme Court's 1973 Roe v. Wade decision. White supremacy and the racist ideas that would later be called "great replacement theory" were born in the 19th century in relationship to these abortion politics.

The Second Amendment also has white supremacist roots. When it was ratified in 1791, many states had laws to prevent enslaved and free Black people from possessing or bearing arms. Prior to the Civil War, Black people were targeted by armed slave patrols, and after the war and the failure of Reconstruction, Black Codes enacted across the Jim Crow South prohibited formerly enslaved people from possessing guns.  Carol Anderson, chair of African American Studies at Emory University and author of "The Second: Race and Guns in a Fatally Unequal America," argues that long after the abolition of slavery, the Second Amendment has been used against Black people: "(P)ervasive anti-Blackness, even after the civil rights movement, turned the Second Amendment's law for protection — the castle doctrine, stand your ground and open carry — against African Americans." She concludes that the Second Amendment "is lethal; steeped in anti-Blackness, it is the loaded weapon laying around just waiting for the hand of some authority to put it to use."

As we have witnessed over and over again, the Second Amendment and its relatively recent interpretation by the courts, including the U.S. Supreme Court, as permitting almost unlimited ownership of military-grade firearms has become lethal for all Americans, but disproportionately so for people of color. The list of atrocities just since the civil rights movement would fill volumes, from the murder of Black, brown and indigenous civil rights and labor organizers, politicians and civilians to, most recently, the assassination of 10-year-old Mexican American children and their teachers in their Texas school and the massacre of African Americans in a Buffalo supermarket.

The murderer in Buffalo did not specifically reference abortion  in the incoherent document he produced prior to killing 10 human beings. But he did mention the U.S. birth rate more than 40 times. He also cited the racist drivel of our former colleague John Gaski, a Notre Dame faculty member in the Mendoza School of Business, who studied marketing but spent the better part of the last three decades offering unqualified, racist and profoundly misogynist opinion on a range of issues from interracial crime (cited by the murderer in Buffalo) to Barack Obama's alleged "anti-Americanism" to, of course, "unrestricted" abortion.

But it is Gaski's racist and inartful rant on immigration that most obviously ties into the "great replacement" theory: "Legalization of between 11 and 30 million illegal aliens in the U.S., either through a new Democrat congress or executive order, will produce enough excess Democrat votes to render it impossible for a Republican ever to win at the national level again. (Non-Americans are known to favor Democrats. Why?) This establishes the one-party state without real opposition that the Dems have long craved." Gaski refers to this as a "political takeover scheme."

Abortion criminalization and gun rights in the U.S. have their roots in white supremacy and racism. If we want to change the former, we have to root out the latter. The historical and current attack on abortion rights also highlights the misogyny embedded in anti-abortion movements that attempt to regulate women's bodily autonomy and integrity. Horatio Storer, who was himself a malignant misogynist, opined that woman was "what she is in health, in character, in her charms, alike of body, mind and soul because of her womb alone." Perhaps Storer was right. If so, it is time that women in the U.S. band together to birth a new political reality, one in which white supremacy and racism are things of the past.

about the new wave of white supremacy

Tamara Kay is a professor of global affairs and sociology at the University of Notre Dame. She is the co-author (with Nicola Beisel) of the multi-award-winning “Abortion, Race, and Gender in Nineteenth-Century America.”

Susan L. Ostermann is an assistant professor of global affairs and political science at the Keough School of Global Affairs, University of Notre Dame. The authors' opinions are their own, and do not necessarily reflect those of the university.