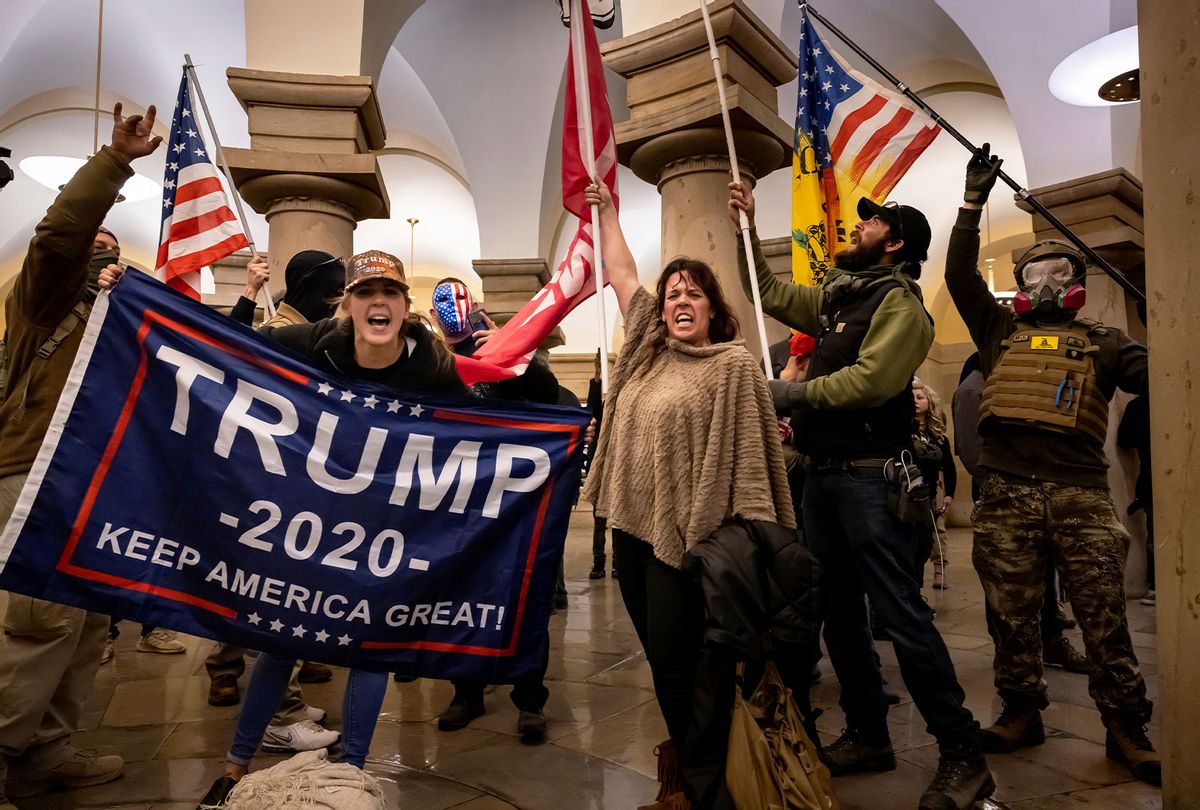 Supporters of US President Donald Trump protest inside the US Capitol on January 6, 2021, in Washington, DC. - Demonstrators breached security and entered the Capitol as Congress debated the 2020 presidential election Electoral Vote Certification. (Brent Stirton/Getty Images)
--

New video evidence of Donald Trump will be played at Thursday's primetime hearing by the House Select Committee Investigating the Jan. 6 Attack on the U.S. Capitol.

"One day after the last rioter had left the U.S. Capitol on Jan. 6, 2021, Donald Trump's advisers urged him to give an address to the nation to condemn the violence, demand accountability for those who had stormed the halls of Congress and declare the 2020 election to be decided," The Washington Post reported Thursday. "He struggled to do it. Over the course of an hour of trying to tape the message, Trump resisted holding the rioters to account, trying to call them patriots, and refused to say the election was over, according to individuals familiar with the committee's work."

The hearing will occur despite the select committee only now getting documents from the Secret Service, which deleted text messages.

"The public could get its first glimpse of outtakes from that recording Thursday night, when the Jan. 6 committee plans to offer a bold conclusion in its eighth hearing: Not only did Trump do nothing despite repeated entreaties by senior aides to help end the violence, but he sat back and enjoyed watching it," the newspaper reported. "He reluctantly condemned it — in a three-minute speech the evening of Jan. 7 — only after the efforts to overturn the 2020 election had failed and after aides told him that members of his own Cabinet were discussing invoking the 25th Amendment to remove him from office."

"The hearing is also expected to tie together details from prior hearings, including the inflammatory presidential rhetoric that drew thousands to Washington that day, Trump's willingness to grant audiences to fringe figures peddling fabulist and unconstitutional theories on how he could keep hold of the presidency and the many times he was urged to intervene during the violence but refused to do so," the newspaper reported. "All of it points to one conclusion, which the committee plans to argue Thursday: Trump wanted the violence, he is responsible for it and his unwillingness to help end it amounts to a dereliction of duty and a violation of his oath of office."