The Jan. 6 committee masterfully ended the first chapter of their presentation to the nation with a blockbuster 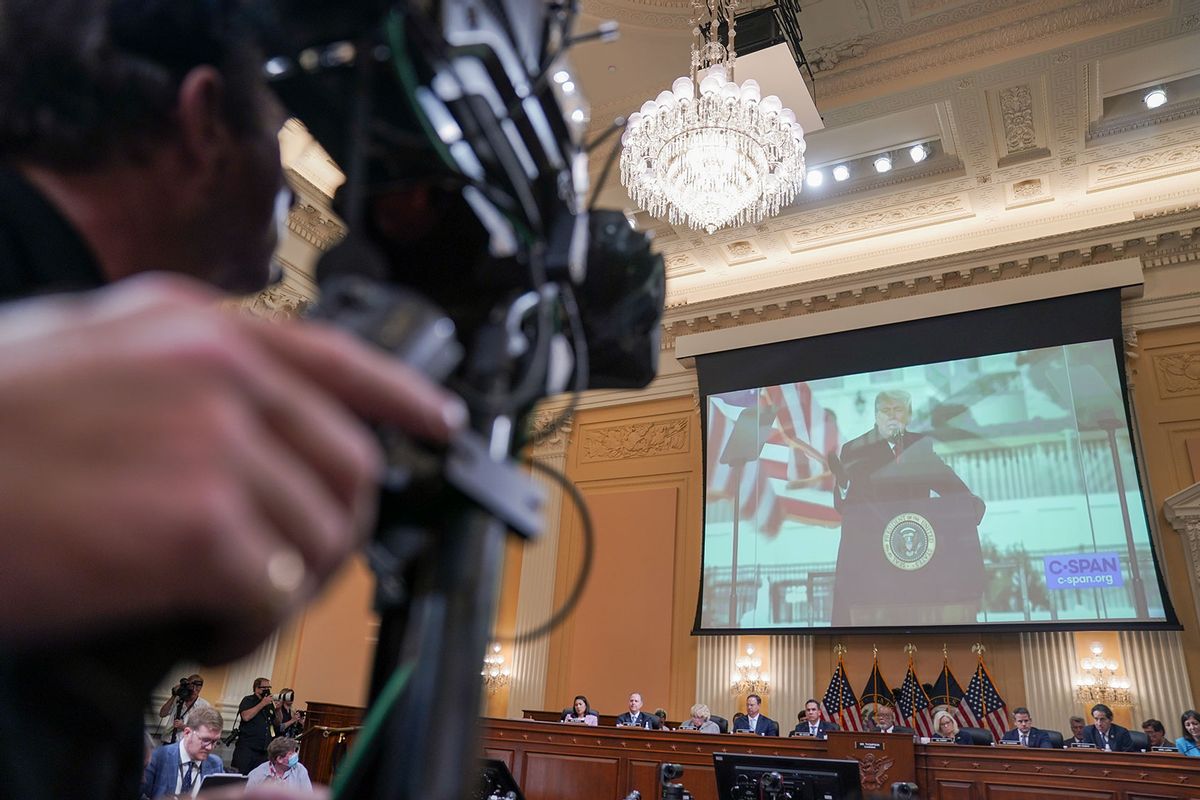 If Donald Trump knew any history — which he most certainely does not — you might think that he based his January 6 rally and march to the Capitol on the infamous March on Rome, a 1923 coup d'etat orchestrated by Benito Mussolini. That is when Mussolini's blackshirts staged a dramatic march to the Italian capitol and took over the government. (Like Donald Trump, Mussolini didn't actually accompany his followers on their march but did have his picture taken with them.) The existing Italian government didn't put up any resistance and Mussolini easily assumed power the next day without any blood being shed. Everyone had already known the mob violence the blackshirts were capable of, they'd been wreaking havoc on the population for some time.

Of course, Trump knew nothing of this when he called for his mob to assemble in the nation's Capitol on the day the congress certified the election for Joe Biden. He just has the same fascistic instincts as Benito Mussolini and thought he could use his crowd to intimidate Congress into going along with his crackpot plans to overturn the election with fake electors. If that didn't work, he even had members of his party, such as Sen. Ted Cruz, R-Tx., prepared to demand that the count be delayed for 10 days so he could continue his pressure on Republican officials.

As it turned out, his crowd staged a violent assault on the Capitol injuring hundreds of police officers. Trump had incited them to not only stop the count but got them to hunt down his allegedly disloyal vice president by tweeting in the middle of the violence, "Mike Pence didn't have the courage to do what should have been done to protect our Country and our Constitution, giving States a chance to certify a corrected set of facts, not the fraudulent or inaccurate ones which they were asked to previously certify. USA demands truth!"

Like Mussolini, the president may not have been with them in person but he was leading them just the same.

Thursday's primetime hearing, the last in this first summer series, looked at Trump's behavior during the time he returned to the White House after giving his incendiary speech in which he told the crowd to march to the Capitol up until the morning after the insurrection when he was coerced into giving an insincere speech condemning the rioters. We had learned in earlier hearings and from news reports that Trump sat in the dining room off the Oval Office watching the big TV on the wall, rebuffing everyone's entreaties to stop the violence.

It is an astonishing 24-hour period in American history, meticulously detailed by the January 6 Committee in all its hideous glory.

He did manage to call GOP senators, however, to try to get them to go along with his daft plan even as his people were storming the building. He also spoke to his lawyer and co-conspirator Rudy Giuliani a couple of times, although we can only speculate about what they discussed. But after sending that inflammatory tweet targeting Mike Pence, Trump refused to do anything more than belatedly release another tweet saying not to harm the Capitol police. It is then that one rioter is heard on tape laughing and saying, "he didn't say anything about not hurting the congressmen!"

They got the message: He didn't say anything about not hurting Mike Pence, either.

The committee revealed some harrowing testimony from an anonymous national security employee who apparently had access to radio traffic from that period and he testified to how very close the Pence came to being confronted by that rabid mob:

"Members of the VP detail at this time were starting to fear for their own lives. There was a lot of yelling, um a lot of — a lot of very personal calls over the radio. So, it was disturbing. I don't like talking about it. But there were calls to say goodbye to family members, so on and so forth. It was getting — for whatever the reason was on the ground, the VP detail thought that this was about to be very ugly."

They also played audio of Pence's Secret Service detail as they decided to evacuate the VP to a safer space and you could hear the frantic concern in their voices.

The committee asked former White House counsel Pat Cipollone to comment on what the people in the White House were thinking and saying as this unfolded:

When asked about the president, Cipollone said he couldn't reveal communications "but obviously I think you know ... yeah."

The committee also showed outtakes from two speeches Trump made, the first on Jan. 6 in which he told the mob to go home and that he loved them, after which he sent his final tweet which said: "These are the things and events that happen when a sacred landslide election victory is so unceremoniously & viciously stripped away from great patriots who have been badly & unfairly treated for so long. Go home with love & in peace. Remember this day forever!"

They also showed the outtakes from a "conciliatory" speech that Trump clearly didn't want to give the next day. That blooper reel shows just how insincere Trump was — and how angry he remained:

It is an astonishing 24-hour period in American history, meticulously detailed by the January 6 Committee in all its hideous glory.

Most of the TV lawyers opined later that what Trump did that day — incite the rioters with his speech and then lead the insurrection with his inflammatory tweets and verbal silence from the Oval Office — probably doesn't rise to the level of a criminal violation. (Other aspects of his coup-plotting almost certainly do.) But his behavior on that day is a perfect example of a president violating his oath of office so completely that to even consider allowing him to become president again should be unthinkable.

Like Mussolini, the president may not have been with them in person but he was leading them just the same.

Yet from Donald Trump's perspective, his crusade to overturn the election isn't over yet.

Just this week, we learned that he is still calling up state officials to strong-arm them into "decertifying" the 2020 election. And while many of the punditocracy suggest that his day is done and his voters are getting tired of him, Trump remains the frontrunner for the Republican nomination in 2024.

Hawl-ing ass: Sen. Josh Hawley booking through Capitol on Jan. 6 is a big hit on Twitter

The committee showed some previously unheard audio and still pictures of the congressional leadership on the evening of Jan. 6 speaking to acting Defense Secretary Chris Miller. Majority Leader Mitch McConnell, R-Ky., and Minority Leader Chuck Schumer, D-N.Y., are heard insisting they want to go back that night to certify the election to prove that the insurrection failed and asking when the building will be cleared for that purpose. We all know that Pence refused to leave the Capitol largely because knew he would be necessary to preside when (if) the violence was controlled. Remarkably, they all did their duty that night.

But before we get too enraptured with the notion that the Republicans rallied to the defense of the Constitution and saved our republic, consider that later that night 139 GOP House members and 8 senators still objected to the certification. The Senate had the chance two weeks later to ensure that Trump could never run again when the House impeached him and they couldn't even get the 16 Republican senators necessary to do it. After all that Trump had put them and the country through they could not summon the will to do anything about it. Just like Trump on Jan. 6, they are leading the GOP's authoritarian take-over by the simple act of letting it happen.