Hearing reveals Pence Jan. 6 security called families to say goodbye as they feared for their lives 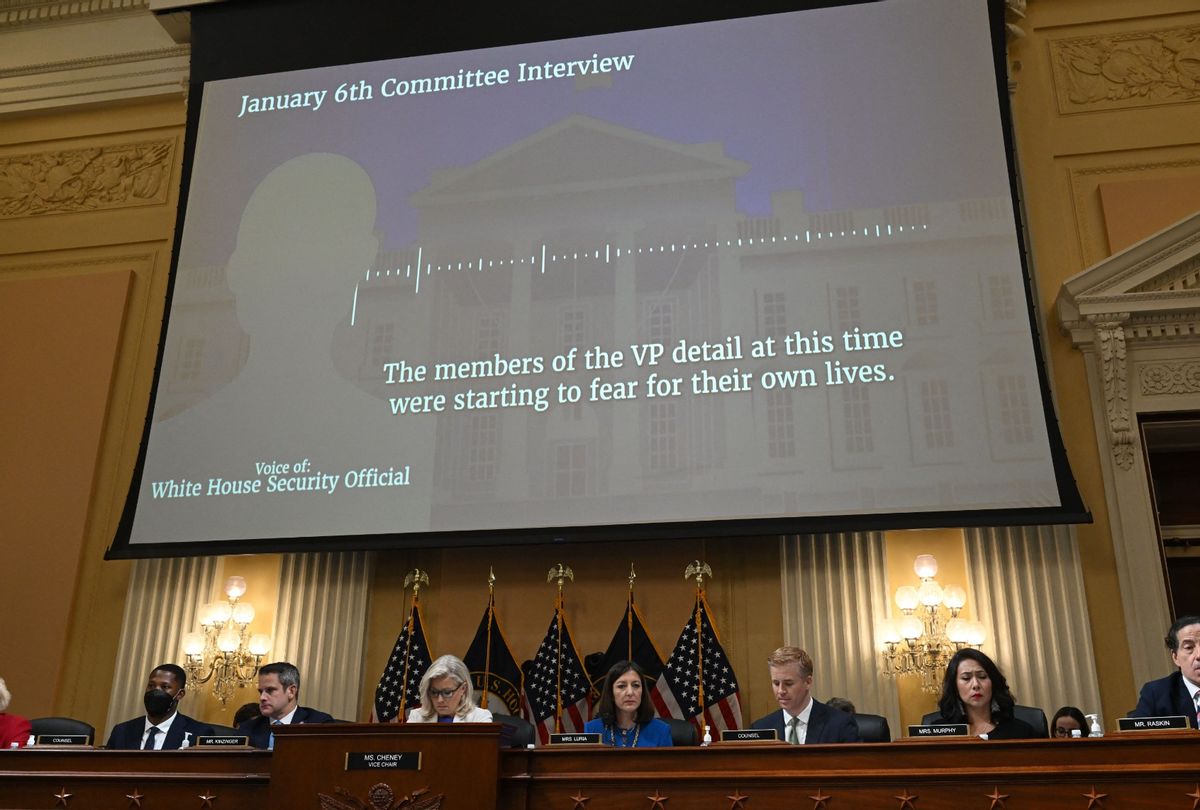 Audio of members of the Former Vice President Mike Pence detail is heard during a hearing by the House Select Committee to investigate the January 6th attack on the US Capitol in the Cannon House Office Building in Washington, DC, on July 21, 2022. (SAUL LOEB/AFP via Getty Images)
--

The House Jan. 6 committee on Thursday revealed that former Vice President Mike Pence's security detail feared for their lives as a mob of Trump supporters stormed the Capitol.

Though some Republicans after the riot described the attack as a "normal tourist visit" and a largely "peaceful protest," Thursday's hearing highlighted the fear that lawmakers and security personnel experienced in real time as Trump supporters hunted lawmakers through the halls of Congress.

Audio played by the committee showed that Pence's Secret Service detail grew increasingly concerned that they would be trapped by the mob as they closed in.

"We need to move now. If we lose any more time, we may … lose the ability to leave. So, if we're going to leave, we need to do it now," one Secret Service agent said over the radio.

Trump sent out a tweet attacking Pence for lacking the "courage" to try to steal the election at around 2:24 pm. Around the same time, a White House National Security Council official noted in a chat log that Secret Service at the Capitol "does not sound good right now."

"There was a lot of yelling. A lot of very personal calls over the radio, so it was disturbing," the official, whose identity was obscured over fear of retaliation, told the committee. I don't like talking about it, but there were calls to say goodbye to family members, so on, so forth. For whatever the reason was on the ground, the VP detail thought that this was about to get very ugly.

"I think there were discussions of reinforcements coming, but again, it was just chaos, they were just yelling," the official explained. "If they're running out of options and they're getting nervous — it sounds like we came very close to either Service having to use lethal options or worse. At that point, I don't know. Is the VP compromised? Is the detail? I don't know. ... If they're screaming and saying things like, 'say goodbye to the family,' like the floor needs to know this is going to a whole 'nother level soon."

Less than a minute after Pence was rushed off the Senate floor, a mob chanting "hang Mike Pence" came within feet of Pence's location.

"Mike Pence didn't have the courage to do what should have been done," Trump tweeted. "USA demands truth."

Witnesses at the hearing and in clips played from past depositions recalled their disappointment that Trump attacked his vice president at a moment when nearly everyone was pleading for him to de-escalate the situation.

"I thought the tweet about the vice president was the last thing that was needed in that moment," former White House deputy press secretary Sarah Matthews, who resigned hours after the attack, told the panel. "It was essentially him giving the green light to these people — telling them that what they were doing at the steps of the Capitol, and entering the Capitol, was okay, that they were justified in their anger. And he shouldn't have been doing that. He should have been telling these people to go home and to leave and to condemn the violence that we are seeing."

Lawmakers were struck with fear as well, including Sen. Josh Hawley, R-Mo., who pumped his fist in support of the mob outside the Capitol shortly before surveillance footage played by the committee showed him fleeing through the Senate hallway after the mob broke into the building.

House Republican Leader Kevin McCarthy, R-Calif., who has since repeatedly defended Trump, desperately pleaded for Trump to call off the mob but was rebuffed as the president sat in his dining room watching the chaos on Fox News.

"Leader McCarthy, who was one of the president's strongest supporters, was scared and begging for help. President Trump turned him down, so he tried to call the president's children," Rep. Adam Kinzinger, R-Ill., said at the hearing.

Trump son-in-law Jared Kushner testified that McCarthy warned him that "it was getting really ugly over at the Capitol."

"I don't recall a specific ask, just anything you could do. Again, I got the sense that they were scared. ... That he was scared, yes," Kushner said.

"Secret Service agents protecting the vice president were exceptionally concerned about his safety and their own," said Rep. Liz Cheney, R-Wyo., the committee's vice-chair. "Republican leader Kevin McCarthy was scared, as were others in Congress. Even those who themselves helped to provoke the violence."