Justice Alito's bad theology: Abortion foes don't have "morality" on their side

Alito's conception of morality, in his abortion decision, relies on a patriarchal theology most Americans reject 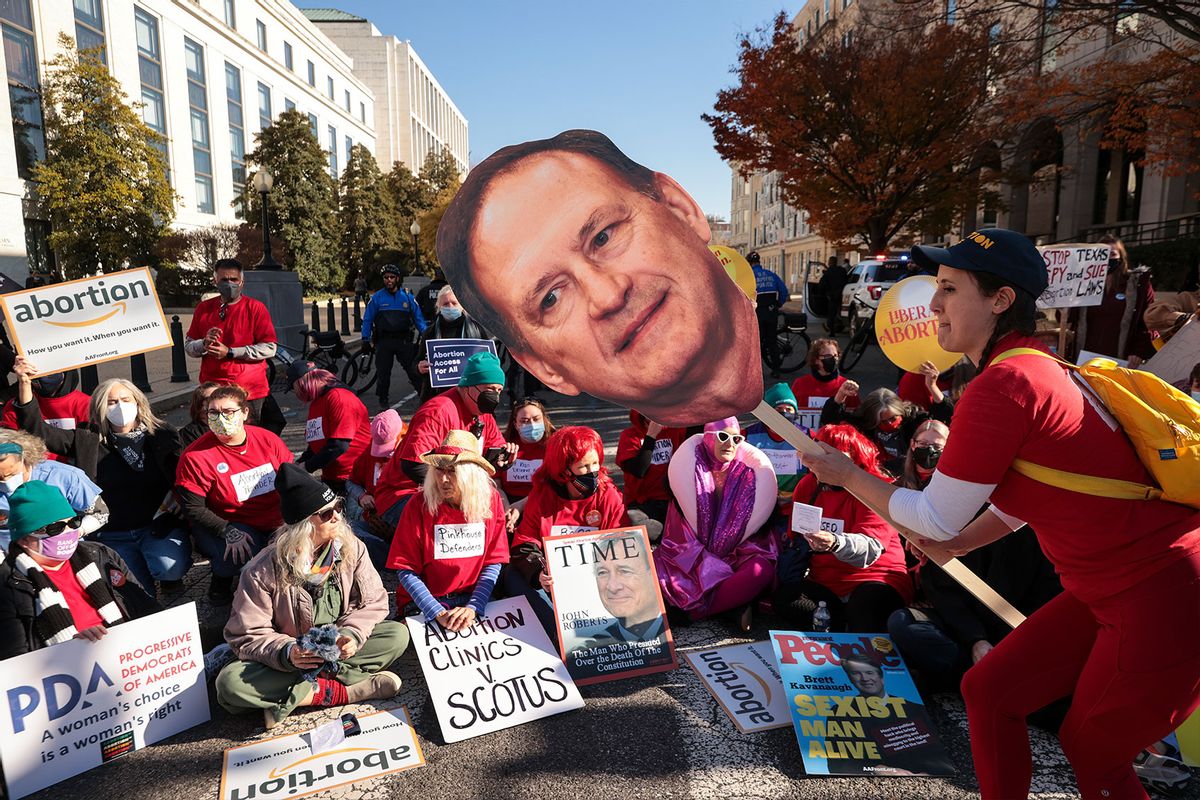 An activist with The Center for Popular Democracy Action holds a photo of U.S. Supreme Court Justice Samuel Alito as they block an intersection during a demonstration in front of the U.S. Supreme Court on December 01, 2021 in Washington, DC. (Chip Somodevilla/Getty Images)
--

In the Supreme Court's Dobbs decision that overturned Roe v. Wade, Justice Samuel Alito placed the question of abortion morality at the center of abortion politics and unleashed the literal tyranny of a profoundly patriarchal "personhood" theology upon female Americans.  (We use "female" here to refer specifically to those with female reproductive capacity, who may identify across the gender spectrum.) Regaining political liberty means, in part, fighting this culture war. But first we have to understand it.

In his opinion in the Dobbs case, Alito writes: "What sharply distinguishes the abortion right from the rights recognized in the cases on which Roe and Casey rely is something that both those decisions acknowledged: Abortion is different because it destroys what Roe termed 'potential life' and what the law challenged in this case calls 'an unborn human being.' None of the other decisions cited by Roe and Casey involved the critical moral question posed by abortion."

Morality has thus become the reigning justification for the state to infringe upon the liberty of female Americans and to subjugate their reproductive labor to its power. An interrogation of this morality, however, reveals that it is underpinned by a theology that both erases and assumes the subjugation of female gestational labor in procreation to patriarchy. We must shatter this male-dominant moral logic and foreground female personhood and agency in order for every American to be equally free.

According to Alito, moral concern for "an unborn human being" apparently exempts pregnant people from the right to "liberty" otherwise guaranteed by the 14th Amendment. In other words, the supposed immorality of abortion is weighty enough to restrict bodily autonomy for all pregnant people in this country and to terrorize potentially pregnant females more broadly. This logic implies that pregnant people also lack 13th Amendment protection from "involuntary servitude," contrary to the strong argument made by legal scholar Michele Goodwin in a recent New York Times op-ed. Consequently, the court has now granted permission to states to force pregnant people to gestate against their will.

To be clear, the 13th and 14th Amendments are specifically about bodily autonomy and freedom from forced labor. They were created after the Civil War in an attempt to end slavery for good, and forced reproduction was correctly understood as a dimension of slavery. But Justice Alito asserts that abortion morality puts pregnant bodies in a "different" category with fewer rights. What, exactly, is the logic here?

The theological premise of the anti-abortion argument is that male fertilization equals procreation. The fundamental labor of female gestation, in this view, does not matter.

At its heart, the theological premise of the anti-abortion argument is that male fertilization essentially equals procreation of a "life" that has equal moral and legal standing to a pregnant person, prior to any female gestation. In effect, this argument holds that the enormous female gestation labor over time, which is literally fundamental to the procreation of a viable "new life," can be ignored as a necessary precursor to the very existence of that life. On a practical level, this amounts to claiming that a habitable house exists at the stage of an architectural drawing, prior to any material labor by the general contractor and the construction workers who literally build it.

Abortion opponents draw upon the biblical story of creation found in the book of Genesis (chapters 1-3) to ostensibly ground their theology in tradition. But Genesis narrates that multiple participants labor at God's direction to create various forms of life through a material process over time, which actually contradicts a theology claiming that male fertilization equals instant-procreation. The real political value is the story's presumption of a male God's dominance and appropriation of others' labor for "His" ends. Using this frame, abortion opponents insert a "sovereign" God into the wombs of pregnant people — exactly at the moment of male fertilization. From that point, the colonization of the female body and female labor becomes not only morally acceptable, but necessary.

According to the Southern Baptist Convention's 2015 statement on the "Sanctity of Human Life," all "human life is formed by God in His image" and "God alone is the Author of life [who] alone numbers our days, from conception to natural death." Similarly, the Assemblies of God 2010 statement on the "Sanctity of Human Life" asserts that God is the creator, sustainer and sovereign of all life, and that a fetus in the womb is already a "person" created by God. Therefore, "when people set themselves up as God to determine if a life is worth living — whether before or after birth — they are usurping the sovereignty of the Creator." Further, paraphrasing assertions by the late Cardinal John O'Connor, the longtime Roman Catholic archbishop of New York, those who dare to claim the moral authority to abort are living into (or repeating) the original sin of Eve and Adam, lusting for power and enacting a diabolical, selfish autonomy.

Abortion opponents must aggressively insist upon this "insta-life" figment of the patriarchal imagination in order to support the claim that "abortion is murder." Otherwise, there is no adequate moral grounding for the legal domination of pregnant people. This slogan then fuels the zeal for abortion bans, which result in the conscription of the entirety of female reproductive capacity from the outset of pregnancy.

It is past time to recognize and critically examine this male-centered theological obstacle, which erodes trust in and respect for the autonomous personhood and moral agency of pregnant people. Prior to external viability there is no gestated, separate "unborn human being" to justify sufficient moral concern that core constitutional rights should be stripped away. Beyond viability, people almost never seek abortions unless there are grave health matters at stake, which even Justice Alito acknowledges may be acceptable.

Those who would subject pregnant Americans to tyranny and degrade them through the involuntary servitude of forced gestation may win some short-term political "victories." But people of good faith and ethics should emphatically refuse their deceptive, inauthentic abortion morality and mobilize politically to manifest a fully inclusive "liberty and justice for all."

about the post-Roe fight for abortion rights

Dr. Elizabeth M. Freese is associate director of the Religion and Reproductive Learning Center at the Religious Coalition for Reproductive Choice and a member of the steering and curriculum committees at SACReD (Spiritual Alliance of Communities for Reproductive Dignity). Her research focuses on the sociology of religion, reproduction and socioeconomic injustice.

The Rev. Angela Tyler-Williams is co-director for movement building at SACReD (Spiritual Alliance of Communities for Reproductive Dignity) and a pastor ordained in the Presbyterian Church (USA).