The extremely '90s history of the flavored latte

Hint: Starbucks is only part of the answer 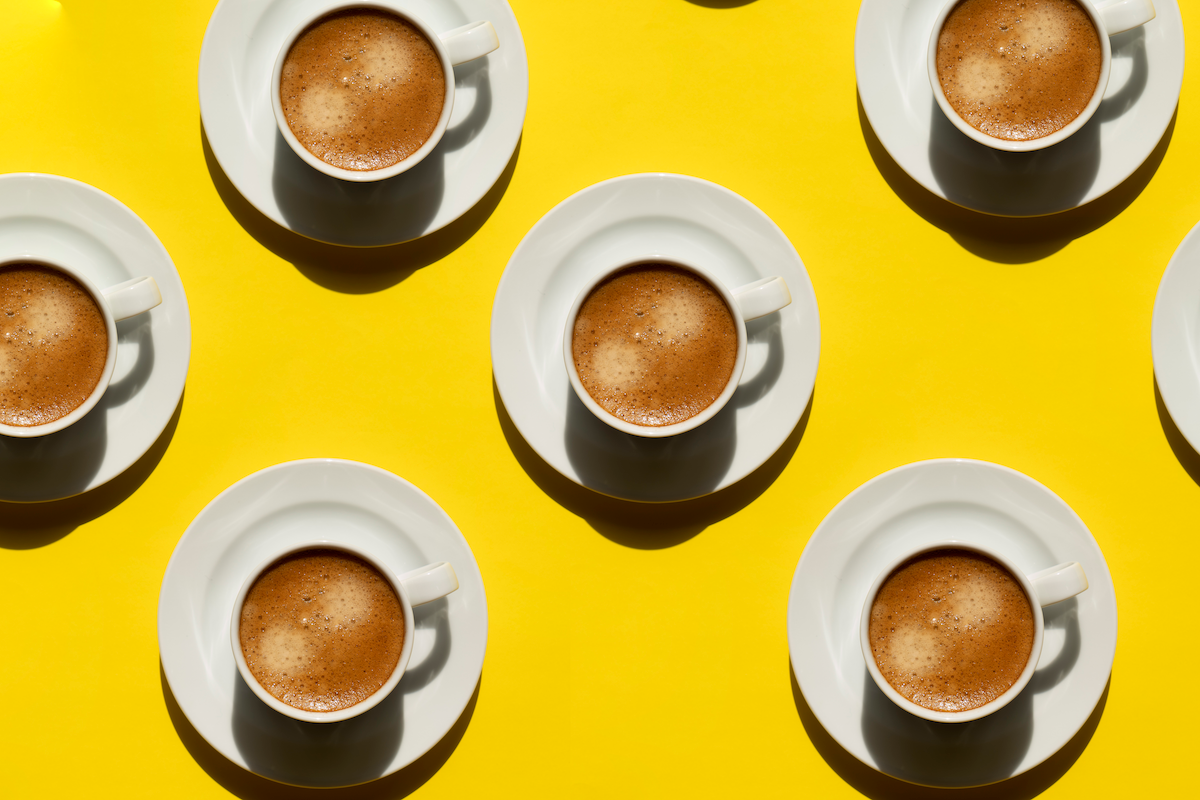 If, like me, you occasionally revisit Nora Ephron's 1998 rom-com classic "You've Got Mail," you may recall one iconic scene at a Starbucks in New York City's West Village. Bookstore owner Kathleen Kelly (Meg Ryan), in a masterfully layered pinafore and turtleneck, smiles as she awaits her soon-to-be '90s-viral order of a tall, skim, caramel macchiato. She's recalling an email from Joe Fox, her AOL crush and unwitting rival played by Tom Hanks.

"The whole purpose of places like Starbucks is for people with no decision-making ability whatsoever to make six decisions just to buy one cup of coffee," Fox's voiceover proclaims. ". . . So people who don't know what the hell they're doing or who on earth they are, can, for only $2.95, get not just a cup of coffee but an absolutely defining sense of self: Tall! Decaf! Cappuccino!"

This scene that so cheekily encapsulates the American consumer would not only cement the rise of coffee's second wave (through re-energized cafe culture at places like Starbucks and Peet's Coffee), but also that of the flavored caffe latte, which has since spawned such viral progeny as eggnog, peppermint mocha, and, of course, pumpkin spice.

At once beloved and maligned, the distinctly American practice of doctoring espresso with flavored syrups and copious amounts of steamed milk purportedly dates back to San Francisco's North Beach neighborhood in the early 1980s. Per San Francisco-based syrup maker Torani, a retired coffee industry veteran named LC "Brandy" Brandenburg walked into North Beach's Caffe Trieste in 1982 and glimpsed the Torani flavored syrup bottles lining the back bar. He asked owner and friend Giovanni "Papa Gianni" Giotta if he could take a few home to Portland, Ore., where he had an espresso machine. He started experimenting until he'd concocted the first flavored latte out of steamed milk, espresso, and vanilla and orange syrups, which he called the Fantasia.

"He picked up the phone and called Harry Lucheta [son-in-law of Torani's founders Ezilda and Rinaldo Torre], who was running the company at that time," says Melanie Dulbecco, Torani's CEO. "He said, 'I think I figured something out here.'"

On a handshake deal, Lucheta sent Brandenburg back to Portland with 10 cases and an agreed-upon commission to start spreading the flavored latte gospel to local roasters and cafe owners. Dulbecco, who started at Torani in 1991 and was mentored by Brandenburg and Lucheta, says it was tough going to sell to cafes in those early days.

"People's initial reaction was, 'You want to do what to your espresso?'" says Dulbecco. "Up to that point what was being served in cafes were cappuccinos or straight espresso."

The practice of flavoring coffee dates back centuries, to the Middle Eastern spice trade when people started brewing coffee with cardamom or cinnamon, or plopping dried fruit pieces into their cups as a flavor complement. To this day, authentic Turkish and Arabic coffees are often brewed with cardamom. In Yemen, coffee beans are sometimes mixed with a heady blend of dried ginger, cardamom, cloves, and cinnamon.

Likewise, Italians have long been "correcting" their espresso with liqueurs. The marocchino, which originated in Piedmont, consists of a shot of espresso blended with cocoa and milk froth. It's worth noting that these are fastidiously considered desserts, bordering on sin if ordered before lunchtime — not unlike Italians' strictness about cappuccinos being solely a morning beverage.

Owing to the influx of Italians to North Beach in the early 1900s, flavored syrups have been part of American cafe culture since the '20s. There, the San Francisco-native Torre set up shop producing Torani's syrups, including tamarindo, orgeat, anisette, grenadine and lemon, which were mostly bound for Italian sodas, though occasionally flavored coffees. Grenadine would remain Torani's most popular flavor until 1990.

However, Brandenburg's latte was purportedly more inspired by the flavored coffees he started seeing on grocery shelves in the 1970s. Popularized by Chicago-based Gloria Jean's Coffee, which debuted in 1979, flavored coffee usually involves mixing flavor compounds with a solvent like propylene glycol to attach the flavor chemicals to the beans. The flavor syrup is poured over coffee beans after the roast and agitated to coat them evenly.

"What Brandy saw was that consumers were looking for this coffee with flavors adhered to the beans, which was not a great experience," Dulbecco says. "The point is, people still wanted it. That's what gave him the idea of doing it in an elevated way. Part of the trick to growing this category was the addition of milk. Initially some people were finding coffee bitter, even with the flavorings. This was a way in."

By the '80s, Torani shifted its entire business to focusing on cafes. It added coffee-friendly flavors like vanilla, chocolate, white chocolate, and caramel and put together suggested menus with flavor syrups intended to blend with, not overpower, coffee. Coffee shops started getting on board, too. In October 1986, at the behest of then-new Starbucks CEO Howard Schultz to create more seasonal coffee drinks, an employee at Seattle's Columbia Tower Starbucks named Dave Olsen invented the eggnog latte.

In the early 1990s, just as Starbucks and Peet's were starting to experiment with different flavored syrups, Bourge, France-based syrup maker Monin established a presence in America with its vanilla, caramel, and hazelnut syrups. Those earliest flavors remain three of Monin's best-selling to this day, says Angela Thompson, beverage innovation director.

It's hard to overstate how instrumental Starbucks was to the flavored latte's rise. The precursor to pumpkin spice, the pumpkin pie latte, had already appeared at a few coffee shops when a Starbucks product manager presented a prototype to the R&D team at the company's headquarters in 2003. The drink would spark an 11% jump in sales the following year and go on to be the company's best-selling seasonal beverage of all time. It's now available in 50 countries worldwide, and as of 2019, CNBC reported that an estimated 424 million had been sold. Meanwhile, spinoff iterations continue sprouting on grocery shelves and backbars, and pumpkin spice season creeps up and up like a slow-moving pumpkin-pie-filling spill, to the point where Torani now has to ensure it has stock of pumpkin spice syrup as early as July.

Of course, not everyone is so keen to debase their espressos with pumpkin spice or any other flavoring for a whole litany of reasons — some of which sprung out of the very same cafe culture that Starbucks helped usher in.

"There's different kinds of thumbing your nose when it comes to coffee," says Merry "Corky" White, a professor of anthropology at Boston University, who specializes in food and coffee. "One is, why mess up a good cup of coffee? Another, which is a big thing in Massachusetts, is Starbucks versus Dunkin' Donuts, or more broadly, this idea of the fake elite versus the fake working class. I think the latte falls into the snob category perhaps in that scenario."

The rise of specialty coffee and its affiliation with "rarified connoisseurship" arguably began in Berkeley in the 1960s, when Alfred Peet opened his first cafe using high-quality beans and manually calibrated roasting to brew a sweeter, less bitter cup. Until then, coffee status was less about the lousy swill in your cup than the place, with its sticky tables and din of philosophical chatter in a haze of cigarette smoke. "Now the coffee itself began to have the power to confer some kind of status on the drinker," White says. This would only grow, later taking the form of backlash against the cheap, flavored coffees becoming popular at supermarkets.

As cafe culture evolved and eventually spilled into the mass market, so did the flavored latte — irking purists across the fake elite-to-working class spectrum. Whether or not you think a flat white belongs in the same category as a $6 single-origin El Salvadoran pourover and an iced vanilla latte with an extra pump, all three use language that carries with it some cache, White says.

"That's another part of the sophistication — which I don't think is real sophistication — but it's the idea that expressing yourself requires this coffee language," White says. "For Starbucks it's 'grande, tall, venti' — things they completely invented — but it sounds exciting to say it in a foreign language."

It's enough to make one wonder what might be the coffee-language currency of a modern-day Kathleen Kelly, dogged owner of an endangered independent bookstore with her earnest, whimsical style and unwavering ethical compass. Would she still attach her name to a Starbucks tall skim caramel macchiato all these years later?

Then again, a defining sense of self averages $5 or more these days, so I suspect she'd probably just drink what she likes.