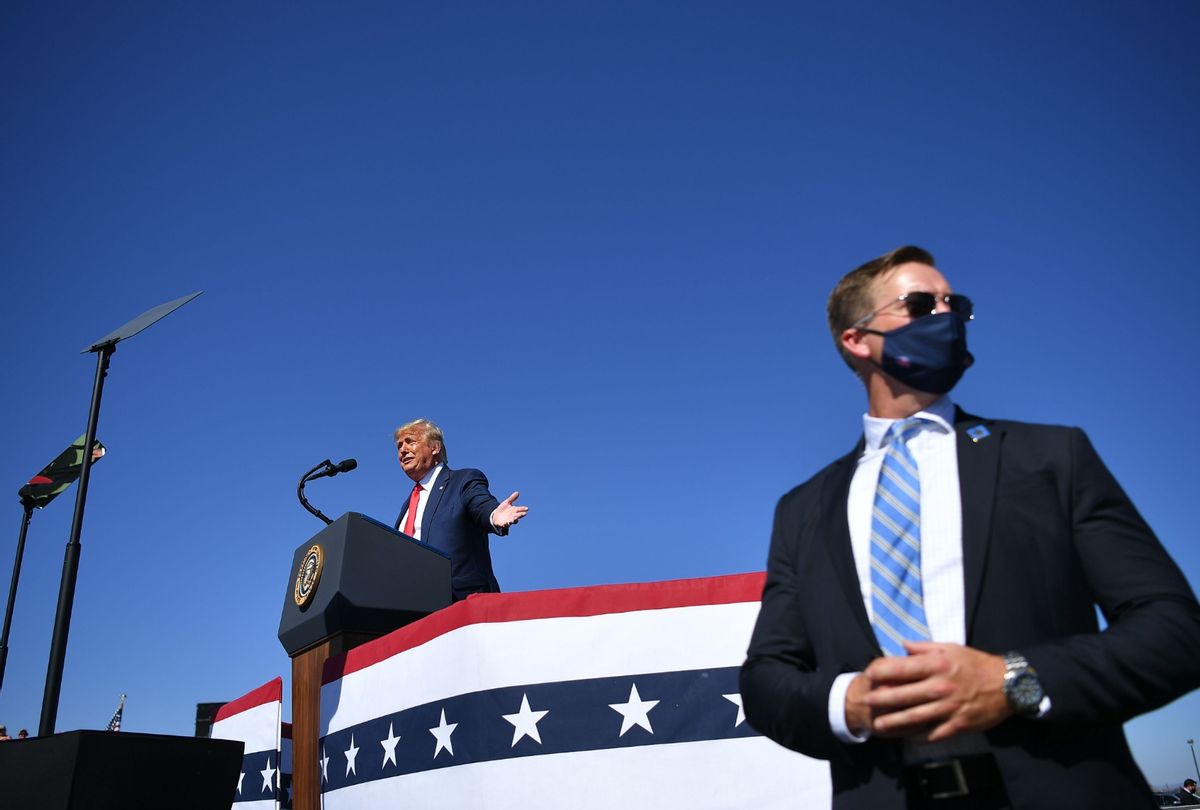 A US secret service agent stands guard as US President Donald Trump speaks during a rally at Prescott Regional Airport in Prescott, Arizona on October 19, 2020. (MANDEL NGAN/AFP via Getty Images)
--

The lawmakers raised "grave concerns" over Cuffari's "lack of transparency and independence," citing reports that his office learned of the missing Secret Service texts in May 2021 but did not tell Congress.

The letter also cited new evidence that Cuffari's office "may have secretly abandoned efforts to collect text messages from the Secret Service more than a year ago," indicating that the office "may have taken steps to cover up the extent of missing records."

Cuffari informed Congress last month that Secret Service text messages from Jan. 5 and 6 were deleted, "roughly 14 months after you reportedly learned that the Secret Service texts were unavailable though Inspectors General are required by law to 'immediately' reports problems or abuses that are 'particularly serious or flagrant,'" the lawmakers wrote, adding that Cuffari's letter also failed to mention that his office told Secret Service to ignore a request to turn over texts from that time.

It's unclear why Cuffari's office "chose not to pursue critical information" at the time, especially since his office submitted a new request for certain texts four months later in December 2021, the lawmakers wrote. Kait, the letter said, also removed "key language" from a February 2022 memo to DHS highlighting the importance of text messages to the IG's investigation. Kait "apparently worked" with other senior staffers to "alter the memo to remove the reference to text messages" and instead praised DHS for its "timely and consolidated" response.

The lawmakers called for Cuffari to "step aside" and for the department to turn over additional documents.

"These documents raise troubling new concerns that your office not only failed to notify Congress for more than a year that critical evidence in this investigation was missing," the letter said, "but your senior staff deliberately chose not to pursue that evidence and then appear to have taken steps to cover up these failures."

Cuffari in a defiant email to colleagues obtained by Politico on Monday wrote that he "cannot always publicly respond to untruths and false information about our work," alleging that the department has faced an "onslaught of meritless criticism."

But it's not just Congress criticizing the department. A DHS IG official told Politico that Cuffari and his senior staff are "uniquely unqualified to lead an Inspector General's office, and the current negative congressional and media scrutiny bear that out."

"The crucial oversight mission of the DHS OIG has been compromised," the official said, "and there will be no course correction as long as Cuffari leads the DHS OIG."

Olivia Troye, a former DHS official and adviser to former Vice President Mike Pence, told CNN on Friday that she went public with her 2020 resignation over the administration's pandemic response because she did not trust Cuffari.

"There is a reason that I went very public with my concerns about the Trump administration, rather than going through the traditional whistleblower process, which would have led me through the inspector general's office at DHS," she said. "And I'll just say that. So, there's a level of trust there that you understand."

Cuffari previously came under fire for rejecting his staff's recommendation to investigate the Secret Service's role in clearing Lafayette Square of protesters ahead of a controversial Trump photo-op, according to the Washington Post. He also scrapped an investigation into whether the agency had flouted pandemic protocols despite recommendations from his staff. His office did not launch a single investigation specifically probing the Secret Service at any point while Trump was in office.

At the same time, reports have highlighted the unusual support Trump received from certain Secret Service personnel. Bobby Engel, the head of Trump's detail on Jan. 6, and Tony Ornato, a longtime Secret Service officer who was tapped by Trump to serve as a deputy chief of staff at the White House, sought to refute testimony from former White House aide Cassidy Hutchinson that Trump lunged at a Secret Service officer on Jan. 6 while insisting he be taken to the Capitol. Both men have since refused to testify under oath to the committee and have retained private counsel, lawmakers said last month.

The Project on Government Oversight (POGO) last month obtained records showing that Cuffari's team was aware agents deleted their texts months earlier than reported but did not tell Congress.

"There's a clear pattern, going back months, showing that Cuffari has no respect for his role as inspector general," Liz Hempowicz, the director of public policy at POGO, told Politico. "Every time we report on another inexplicable misstep that shows Cuffari clearly not meeting his mission, he doubles down and claims everything is fine and that you just have to trust him. Biden should remove Cuffari as DHS inspector general now. DHS needs a credible watchdog."

about the Secret Service and Jan. 6