Agents disputed that Trump tried to grab steering wheel, driver. Her lawyer says they should testify under oath 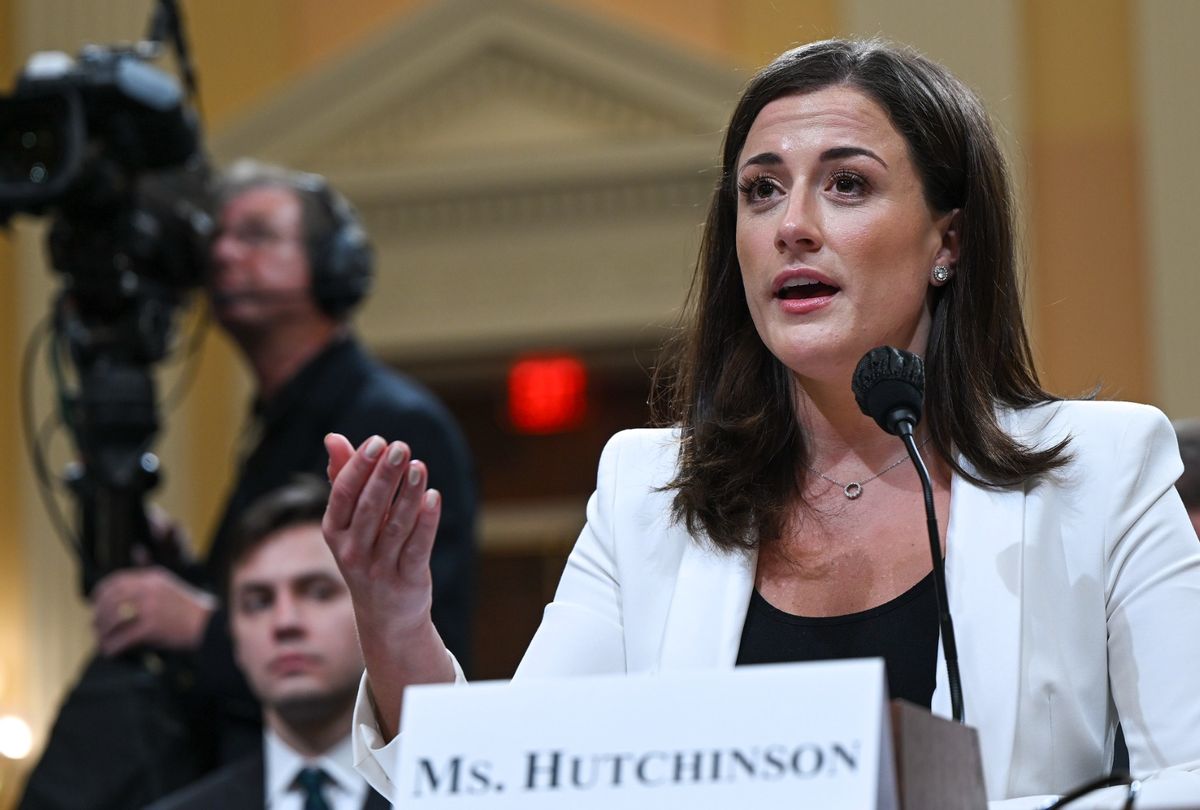 Cassidy Hutchinson, a top former aide to Trump White House Chief of Staff Mark Meadows, testifies during the sixth hearing by the House Select Committee to Investigate the January 6th Attack on the U.S. Capitol in the Cannon House Office Building on June 28, 2022 in Washington, DC. (Brandon Bell/Getty Images)
--

Multiple officials that disputed parts of former White House aide Cassidy Hutchinson's testimony to the Jan. 6 committee were seen by some in the Trump administration as the president's "yes men," according to Washington Post reporter Carol Leonnig, who wrote a book about the agency last year.

Hutchinson, a former top aide to White House chief of staff Mark Meadows, testified to the House committee on Tuesday that former President Donald Trump knew his supporters had weapons and tried to get officials to remove metal detectors to allow them to pass. She also testified that Trump tried to drive to the Capitol with his supporters even though White House counsel Pat Cipollone warned that if he did, "we're going to get charged with every crime imaginable." After the attack, Meadows, former Trump lawyer Rudy Giuliani, and numerous House Republicans sought pardons, according to her account.

At one point in her testimony, Hutchinson recalled a conversation with Tony Ornato, then the White House chief of operations, who told her that Trump had a "very strong, very angry response" when Secret Service refused to take him to the Capitol.

Hutchinson said Ornato told her that Trump declared, "I'm the fucking president, take me up to the Capitol now," before trying to grab the steering wheel and lunging at Secret Service agent Robert Engel.

Hutchinson told the committee that Ornato described the incident with Engel present and he did not dispute the account.

But after Hutchinson's testimony, NBC News' Peter Alexander reported that "a source close to the Secret Service" told him that Engel and the president's driver were prepared to testify under oath that "neither man was assaulted and that Mr. Trump never lunged for the steering wheel."

The Secret Service itself did not directly respond to the allegations. The "Secret Service has been cooperating with the Select Committee since its inception in spring 2021, and will continue to do so, including by responding on the record to the Committee regarding the new allegations surfaced in today's testimony," the agency said in a statement to CBS News.

RELATED: What Cassidy Hutchinson told us — and why we should have known it already

A Jan. 6 committee aide told NBC News that the panel found Hutchinson's testimony "to be credible."

"The committee welcomes anyone who wishes to provide additional information under oath," the aide said.

Hutchinson's lawyer Jody Hunt, a former aide to Trump Attorney General Jeff Sessions, also called for the officials to testify under oath as she had done.

Leonnig, who last year released the book "Zero Fail: The Rise and Fall of the Secret Service" covering the Trump years, provided some background information on Engel and Ornato, a longtime Secret Service agent who now serves as the agency's assistant director of training, in an interview with MSNBC's Rachel Maddow.

"Some people accused them of at times being enablers and 'yes men' of the president—particularly Tony Ornato—and very much people who wanted to do what he wanted and see him pleased," Leonnig said. "And that was frustrating to agents who were more focused on, say, security, or being independent, or good planning. So, both of these individuals lose a little credibility because of how closely they have been seen as aligned to Donald Trump."

Leonnig said that many members of the Secret Service privately and publicly supported his re-election.

"There was a very large contingent of Donald Trump's detail who were personally cheering for [Joe] Biden to fail. And some of them even took to their personal media accounts to cheer on the insurrection and the individuals riding up to the Capitol as patriots. That is problematic," Leonnig said.

"I'm not saying that Tony Ornato or Bobby Engel did that," she added, "but they are viewed as being aligned with Donald Trump, which cuts against them. However, if they testify under oath [that] this is what happened, I think that's going to be important, because Cassidy Hutchinson can only say what she heard happened."

Former White House communications director Alyssa Farrah also raised questions about Ornato's credibility. Farrrah told CNN's Jake Tapper that "she has told the truth under oath" to the Jan. 6 committee in interviews "only to have Ornato dispute her claim while NOT under oath."

Ornato helped coordinate Trump's controversial photo op at a church near Lafayette Square after the park was forcibly cleared of peaceful protesters, according to The Washington Post. Farrah told CNN she discussed the episode with the committee, recalling telling Ornato and Meadows to "give a warning to the press that they'd be clearing the park so members of the press wouldn't get hurt."

Ornato later told reporters that her claim wasn't true, Farrah said, even though "half a dozen people heard it."

A source close to the Secret Service told CBS News that officials do not dispute that Trump was "irate or that he demanded to be taken to the Capitol." The source added that Ornato and Engel have both appeared before the committee in closed-door interviews. Engel told the panel that Trump wanted to go to the Capitol but the agency determined it was unfeasible, according to Politico.

"The steering wheel incident that she testified hearing about it coming into question. But there's ample testimony and reporting and, you know, Trump's own statements that he wanted to go to the Capitol," tweeted New York Times reporter Maggie Haberman. "Still true even without that anecdote."