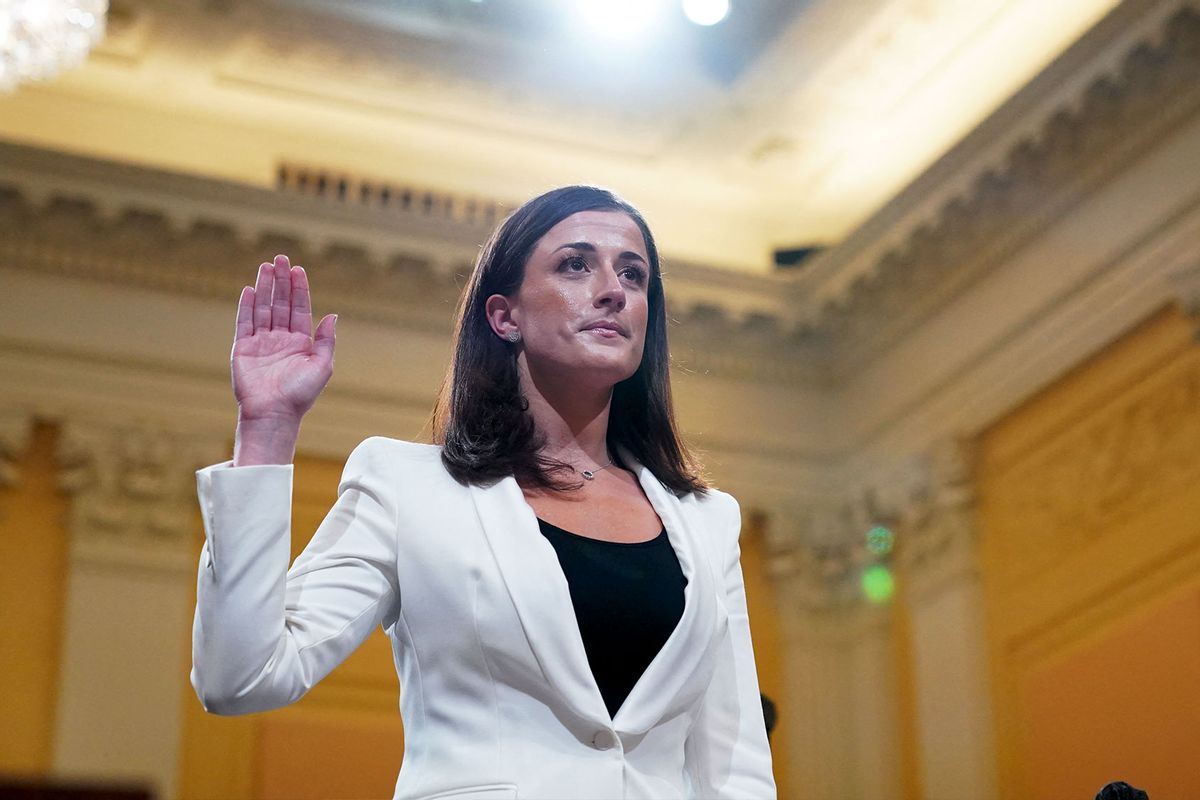 Cassidy Hutchinson, an aide to then White House chief of staff Mark Meadows, is sworn in during a House Select Committee hearing to Investigate the January 6th Attack on the US Capitol, in the Cannon House Office Building on Capitol Hill in Washington, DC on June 28, 2022. (STEFANI REYNOLDS/AFP via Getty Images)
--

We now know that Donald Trump imagined himself as the head of the violent, armed mob storming the Capitol on Jan. 6 to steal the election. He repeatedly tried to make his fantasy a reality, even as his lawyers and security personnel recommended against it. And when that didn't work out for him, he threw a tantrum like the thuggish bully that he is, physically assaulting a Secret Service member in an attempt to force the agent to let Trump play out the Leni Riefenstahl remake in his head.

There will be a world of deflection, bullshit, hand-waving and dithering from Republicans to distract from Tuesday's revelations. But it will be difficult to erase the vivid picture painted by Cassidy Hutchinson.

A top aide to Trump's chief of staff Mark Meadows, Hutchinson testifed before the House Select Committee January 6 in a surprise, last-minute hearing Tuesday. Hutchinson was already the source of much of the information about Trump's behavior on and around Jan. 6, including his approval of the Capitol rioters threatening to murder his vice president, Mike Pence. So, even though some reporters, like Maggie Haberman of the New York Times, promised that Hutchinson's testimony would be "explosive," it was reasonable to be skeptical that much more of relevance would be revealed.

The skeptics, however, were wrong.

Hutchinson had more to tell, and the main takeaway is so wild it would be hard to believe if it were any other president. Trump's vision for January 6 was that he would be a general in an ill-fitting suit, standing before Congress with an army of armed red hats behind him, telling the legislature to give him the White House or else. But let's face it: because it's Trump it's all too easy to believe. This is the same clown who dramatically pulled his mask off from the White House balcony like he was tearing down an enemy flag when he returned from the hospital from COVID-19. The same man who marched through a tear-gass-cleared Lafayette Park flanked by a battalion of security to wave a Bible around in the posture of some imaginary Christian soldier. We've endured enough of Trump's reality TV-informed flair for cheesy drama. At this point, it would be more of a surprise to find out he didn't want to pull off a knock-off remake of Mussolini's march on Rome on Jan. 6.

Hutchinson is everything that triggers the fragile egos of fascist thugs: A young, pretty woman who disobeys them.

The corniness of Trump's fascist aesthetic is weird, but it's important not to lose sight of the most important takeaway of Hutchinson's testimony: There was a mind-meld between Trump and his minions who stormed the Capitol on January 6, based largely on their shared enthusiasm for violence.

As Hutchinson laid out, Trump was not only aware that many in the rally crowd were heavily armed, he seemed to be counting on it. He got angry with the Secret Service for not letting people with AR-15s and body armor clamor to his side during the rally, saying, according to Hutchinson, "I don't fucking care that they have weapons. They're not here to hurt me." He demanded that the armed thugs that support him "march to the Capitol from here."

Trump knew they were armed. Yet he directed his supporters to the Capitol on Jan. 6. He then repeatedly insisted on being the head of the mob. When Secret Service wouldn't let him, he yelled, "I'm the f-ing president! Take me up to the Capitol now!" and physically attacked the agent driving the car in an attempt to grab the wheel.

That Trump is a violent bully is, on one hand, not a surprise, and not just because he has a long history of publicly fantasizing about violence and encouraging his supporters to murder his political opponents. He is on tape, after all, bragging about his tendency to sexually assault women. He's been accused of rape by journalist E. Jean Carroll and his ex-wife, who retracted her claim during a lengthy divorce proceeding where her alimony was threatened. Donald Trump Jr.'s college roommate additionally reports that he saw Trump slap his son "across the face, knocking him to the floor in front of all of his classmates," because his son didn't want to wear a suit to a baseball game.

Tuesday's hearing also underscored some of the political and legal problems around dealing with Trump's stochastic terrorism.

Trump frequently careens between an obvious longing to champion violence openly and a lawyer-induced awareness that such talk can create legal troubles. As Hutchinson's testimony demonstrated, that tension was in full effect on Jan. 6 and in the days before and after. Her testimony indicates that Meadows, at least, seemed quite aware that all the hype around January 6 was about drawing a violent crowd to the Capitol, even telling her on Jan. 2 that "things might get real, real bad." When that prediction came true, Meadows was too afraid to offend Trump to even discuss asking Trump to pull his foot off the gas. She also testified repeatedly that Trump's lawyers seemed quite aware that the intent here was to incite a fascist riot. She paints a picture of lawyers fluttering around, trying to convince Trump to embrace plausible deniability by, for instance, removing the word "fight" from his inciting speech.

"We're going to get charged with every crime imaginable" if Trump follows through with his plan to join the rioters, she recalls Trump's lawyer, Pat Cipollone, complaining. (One imagines that the word Jared Kushner would use is "whining.")

The irony is that, as usual, Trump's minions saved him from himself. If he had his way and was able to lead the Capitol insurrection, it would have prevented him from playing the game he currently plays to deflect blame for Jan. 6. That gaslighting campaign, aided by the Republican Party and its propaganda arm of Fox News, centers around the claim that Trump was as surprised as anyone by the violence and had no intention of inciting it when he told the mob to march on the Capitol. Despite all the evidence that Trump is a violent thug we have seen over the years, his apologists keep insisting on portraying him as a victim. That tendency reached comical heights during the Fox News discussion of the Secret Service agent that Trump allegedly assaulted.

The clip illustrates the constant tension between Trump's desire to portray himself as a tough guy and Trump's need to weasel out of legal accountability. The latter ends up making him look like a weak old man who can't even get his supposed staff to follow orders. That provokes the kind of insecurity that, in turn, provokes more ridiculous macho chest-beating violent fantasies Trump has been rolling out regularly at his rallies, which have mostly been ignored by the press.

RELATED: Did violence follow Roe decision? Yes — almost all of it against pro-choice protesters

Tuesday's hearing also underscored some of the political and legal problems around dealing with Trump's stochastic terrorism. It may be that Trump never directly conspired with the Proud Boys and Oathkeepers and other right-wing militias to storm the Capitol that day. He didn't need to. He's spent years using public forums to signal his shared affinity for violence with these groups, even going so far as to tell the Proud Boys to "stand by" during his presidential debate with Joe Biden. They understood what he wanted from them. He just needed to give them a time and a place, and that's exactly what he did.

Why the January 6 committee decided to suddenly have Hutchinson testify is still somewhat of a mystery, but it's reported that concerns about her safety were a major factor. That is, sadly, the least surprising thing in the world. Hutchinson is everything that triggers the fragile egos of fascist thugs: A young, pretty woman who disobeys them. Sitting before the world and offering her testimony, Hutchinson shows what true strength and courage look like. It's not, as Trump and his violent supporters think, about how many skulls you can bash in or death threats you can make. It's about knowing that it's dangerous to do the right thing and doing it anyway. The only remaining question is whether enough of the public will see this and also know the difference.