Did violence follow Roe decision? Yes — almost all of it against pro-choice protesters 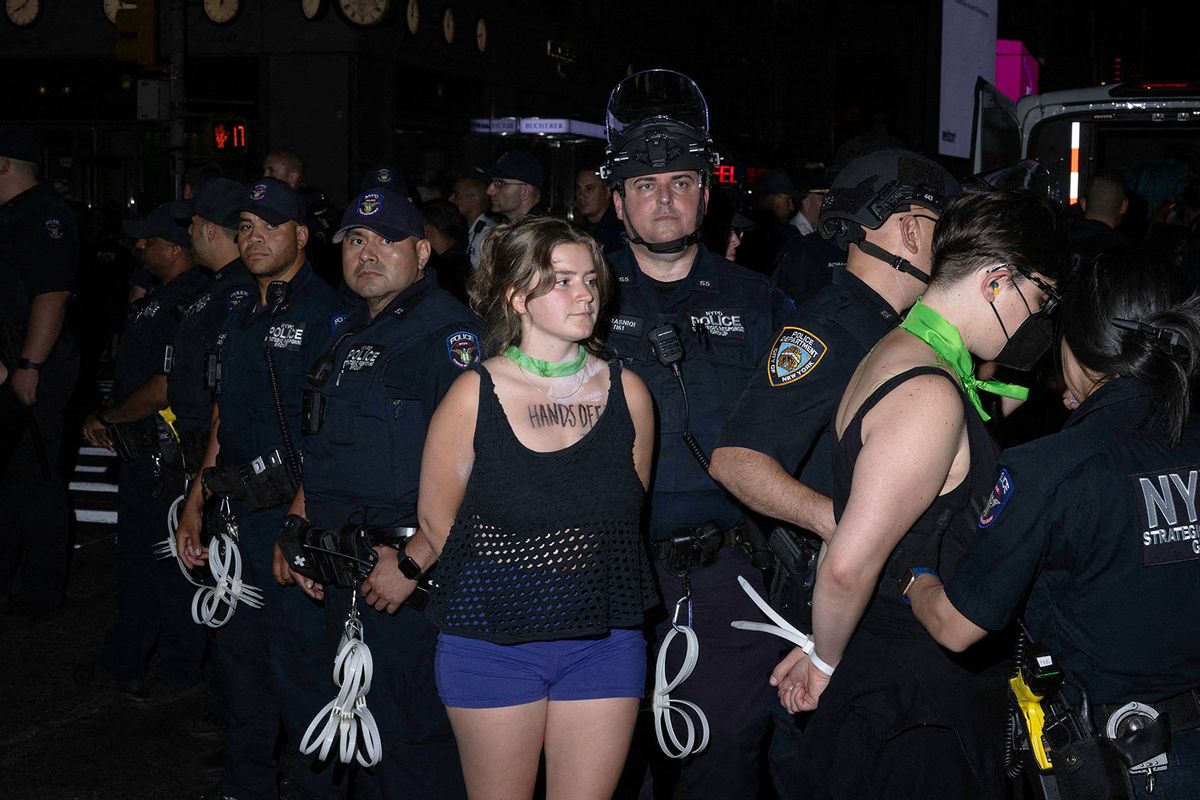 NYPD officers arrest several abortion rights activist after they blocked traffic while protesting the overturning of Roe Vs. Wade by the US Supreme Court, in New York, on June 24, 2022. (ALEX KENT/AFP via Getty Images)
--

Before the Supreme Court even announced its decision overturning Roe v. Wade last Friday, right-wing politicians and media had begun warning of a wave of violent demonstrations or riots by pro-choice protesters. Rep. Paul Gosar, R-Ariz., called on "all patriots" to defend local churches and crisis pregnancy centers, while Fox News hyped warnings about a "night" or "summer of rage" and various far-right activists — from the America First/groyper movement to the Proud Boys to a staffer for Arizona gubernatorial candidate Kari Lake — issued threats against leftists they claimed were about to become violent.

But it appears that most of the violence that occurred in response to the Roe decision this past weekend was directed at pro-choice demonstrators, not caused by them.

On Friday night, in Cedar Rapids, Iowa, a man drove his pickup truck into a group of women protesters, hitting several and driving over the ankle of one woman. Iowa journalist Lyz Lenz, who was covering the protest, noted on Twitter that the attack came at the end of a peaceful event, as demonstrators were crossing the road at a crosswalk while the man had a red light. "The truck drove around other cars in order to hit protesters," Lenz wrote, adding that the driver "was screaming" while a woman in the truck with him begged him to stop.

As Andy Campbell and Alanna Vagianos reported at HuffPost, a number of other protesters ran after the truck, trying to stop it, but the driver continued on, knocking over several people. The woman whose ankle was run over was sent to the hospital. As of Saturday, the man had not been charged with any crime.

That same night, at a pro-choice protest in Providence, Rhode Island, an off-duty police officer named Jeann Lugo — who, until this weekend, was a Republican candidate for state Senate — punched his Democratic opponent, reproductive rights organizer Jennifer Rourke, in the face.

Providence police arrested Lugo and charged him with assault and disorderly conduct, placing him on administrative leave. On Saturday, Lugo dropped out of the Senate race and announced he would not be seeking any political office before apparently deactivating his Twitter account.

In Atlanta, photographer Matthew Pearson documented a group of more than a dozen Proud Boys coming to counterprotest a pro-choice demonstration, while an Atlanta antifascist group posted photos of the group boarding a Humvee painted with the Proud Boys' logo.

In several other states, police responded to demonstrations against the SCOTUS ruling with heavy-handed tactics and violence.

In Greenville, South Carolina, multiple videos seemed to show police arresting and dragging pro-choice protesters away, as others in the crowd screamed at them to stop. In one video, a young woman is violently shoved backward into the street, where she falls and appears to hit her head. When an older woman comes over, apparently to help her, she is also put in handcuffs and taken away.

In a statement, the Greenville Police Department said it was conducting an internal review of the incident.

At the Arizona state capitol in Phoenix, police shot tear gas canisters into a crowd of protesters on Friday night, allegedly without warning, after some protesters began banging on the windows of the building, and, a video taken from inside the capitol indicates, one person kicked a glass door several times.

Arizona state Sen. Wendy Rogers, who has called for hanging "traitors" who refused to overturn the election, declared a protest that resulted in no arrests or injuries the "#J24 Arizona Capitol Insurrection."

Republican lawmakers claimed in a statement that "extremist demonstrators" had tried to "make entry by breaking windows and pushing down doors" and described themselves as having faced a "hostage" situation and an "insurrection" meant to overthrow the state's government, although there were no arrests, injuries or broken glass. State Sen. Wendy Rogers — who called for building gallows and hanging "traitors who betrayed our country" during a speech to the white nationalist America First movement this February — declared the protest the "#J24 Arizona Capitol Insurrection," and, along with her GOP colleagues, called for more arrests. At HuffPost, Sebastian Murdock reports that after the protesters dispersed and moved to a park downtown, they were tear-gassed again. According to AZ Central, at a subsequent protest on Saturday, numerous legal observers were handcuffed and detained, one for around two hours.

In Los Angeles, videos show numerous violent confrontations between police and both protesters and the press. In one video, taken by photographer Michael Ade, LAPD officers are seen pushing protesters to the ground and striking at least one with a baton after the group tried to occupy or shut down the 101 freeway. In another video taken by Ade, which subsequently went viral, police shove former "Full House" actor Jodie Sweetin backward off a highway embankment — where, Ade tweeted, Sweetin was trying to lead protesters away from the road — and sent her sprawling to the pavement.

In downtown L.A., video by documentarian Vishal Singh depicts a woman protester shoved backward onto the ground and shot in the stomach with a riot gun projectile. In another video, police appear to beat a man who is being arrested, banging his head against a concrete curb before dragging him away while other protesters yell that the man is having a seizure.

Although the man has since been charged with attempted murder — for allegedly using an aerosol can as a makeshift flamethrower against an officer — Singh said, "It was one of the most brutal arrests I've ever seen, if not the most brutal."

When local journalist Tina Desiree Berg, who was wearing press credentials and took extensive footage of the protests throughout the weekend, tried to get a better angle of the man being arrested, one police officer punched her in the head before another shoved her to the ground, later telling her on video, "We're trying to protect you."

"If he had just walked over and said, 'Can you move over a foot,' I would have complied," said Berg in an interview with Salon. "I don't think this protest would have escalated to any violence if the protesters had just been left alone."

Berg, it turns out, was far from the only journalist hit or manhandled by LAPD officers last weekend, and, as Los Angeles Times journalist Kevin Rector writes, LAPD officers on Saturday repeatedly violated protections for journalists covering protests that were recently expanded by both state law and LAPD policy. Singh himself turned around at one point to find an LAPD officer pointing a riot gun, which fires lead beanbag rounds, at his head from just a few feet away. And a video from Beverly Hills Courier journalist Samuel Braslow shows a national legal observer being shoved to the ground by an officer.

Southern California right-wing extremists "will take any excuse to get in the streets and fight with 'antifa.' But these guys view anybody as 'antifa.'"

Singh also noted that a far-right activist associated with the white supremacist Rise Above Movement, which the Southern Poverty Law Center describes as "a Southern California-based racist fight club," posted a message on Telegram claiming that an allied "nationalist" had infiltrated the pro-choice protest. On Monday afternoon, the same activist published a video clip, taken from a short distance, of Singh standing at the protest, with the caption, "Hi Vishal."

Already over the last three days, right-wing groups in the area have threatened to counterprotest pro-choice demonstrations, and Singh said he's seen several people from those circles at protests over the weekend, including a man who assaulted him at an anti-vaccination rally last year.

"Typically [that man] shows up at right-wing or Proud Boys protests," said Singh. "But at every one of the protests over the last few days, he was following [protesters] around."

Berg notes that clashes between far-right extremists and counterprotesters have become a regular occurrence in Southern California. "These events are monthly at this point," she said. "This group is incredibly radicalized. They are very homophobic, very misogynistic, incredibly racist. They want white nationalism and the hood is off. So they'll take any excuse to get in the streets and fight with 'antifa.' But people should understand: these guys view everybody as 'antifa.' We've seen them call LAPD officers 'antifa.'"

However ludicrous that might seem, she continued, "They also really believe they are on a mission that is morally correct and that they're the good guys. When you view it through that lens, it's easy to see how things have become so violent in the way that they have. And I think it's going to get worse."

While conservative media and politicians have raised the issue of vandalism or violence against crisis pregnancy centers since the draft SCOTUS opinion was leaked in May, successfully calling for an FBI investigation, a new report released Friday by the National Abortion Federation noted a sharp increase in incidents of vandalism, assault and battery and hoax bomb threats against actual abortion clinics in 2021, including a 200% increase in reports of stalking clinic staff.

Read more on America after the fall of Roe v. Wade: