It’s time to give Black fathers the credit they deserve 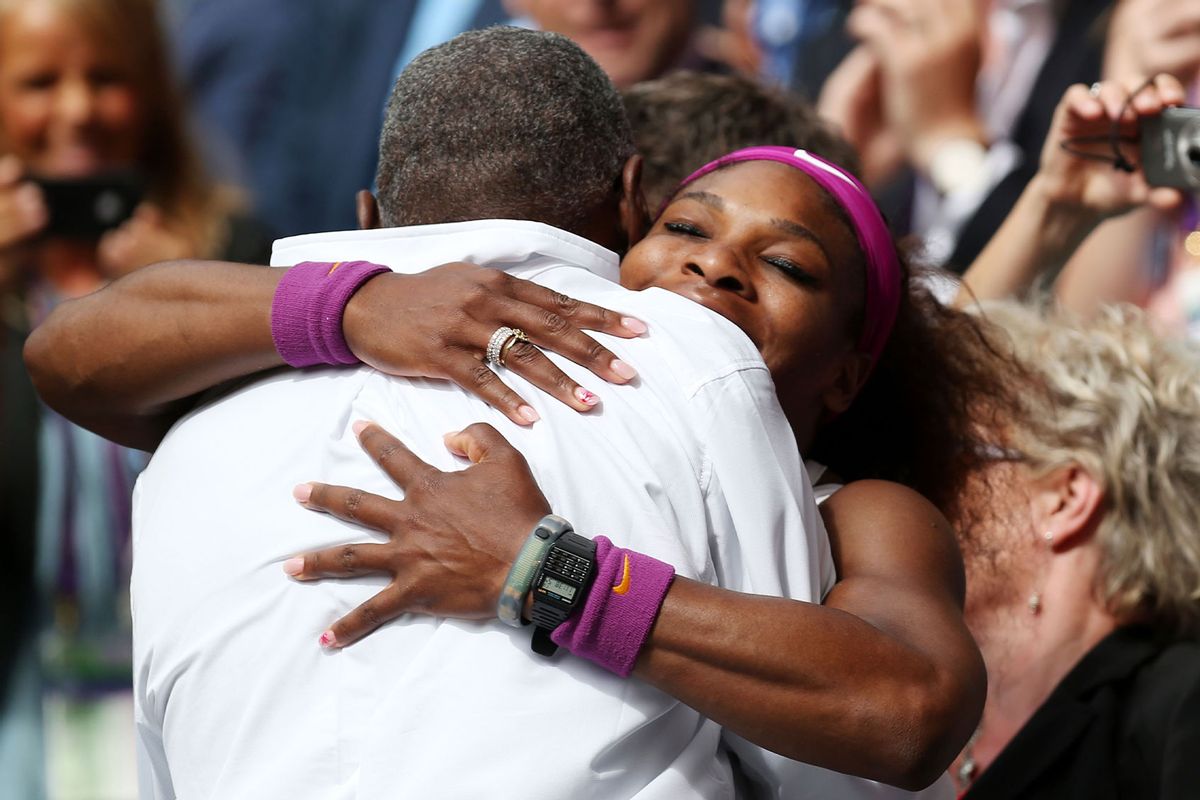 Serena Williams of the USA celebrates with her father Richard Williams after her Ladies’ Singles final match against Agnieszka Radwanska of Poland on day twelve of the Wimbledon Lawn Tennis Championships at the All England Lawn Tennis and Croquet Club on July 7, 2012 in London, England. (Clive Rose/Getty Images)
--

Multiple recent cultural moments have thrust Black fatherhood into the American consciousness, in the process defying popular stereotypes of Black fathers. Recent celebrations of Black fathers include the movie "King Richard," about Venus and Serena Williams' devoted father, the titular Richard; and the powerful eulogy Oprah Winfrey shared for her father, in which she highlighted his empathy and compassion. These narratives abut against mischaracterizations of Black fathers as absent or uninvolved in their children's lives.

From the birth of their children, Black fathers are deeply involved, and although we have a rich understanding of how mothers' mental health impacts child development, we rarely make the connection between fathers' mental health and children's outcomes. For Black fathers, this connection is even less explored. But Black men continue to embrace their paternal roles despite significant challenges — and are often expected to make tough decisions in the best interests of their children and families.

Black fathers have long been mischaracterized as absent, uninvolved, and worse uninterested in the lives of their children and families. In popular culture the trope of the absent Black dad, or the family system without the benefit of the presence of the Black dad, is pervasive. The science, however, shows that nothing could be further from the truth. Even among fathers who do not share residence with their children, non-resident, paternal involvement is high and increases as the child ages. There is none blind as they who will not see, and Black fathers are not invisible. They are present. They are involved. They are important to their children and families.

According to a CDC National Health Statistics Report, compared to White and Hispanic fathers, Black fathers remain more involved across a range of nurturing and involvement activities like sharing meals, bathing, diapering, dressing, and reading to their children.

Serena Williams has come to the defense of her father's sometimes difficult decisions, in the context of their reality, and upheld the image of her father as a dad intent on creating the best opportunities for his daughters to excel and find success in their area of expertise. He also prepared them to deal with the challenges of living in a world that had proven hostile, unwelcoming, and unequal in its treatment of him. In a 2003 interview with Oprah Winfrey, Serena, referencing her success, says, "Our father doesn't get enough credit." Venus added "I'm proud of my dad... he is an unbelievable visionary — and I think Serena and I understood that even when we were small."

Winfrey reflected on her dad, Vernon Winfrey, as "a bridge over troubled waters." She remembered him as a man of "respect, character, honor, doing the right thing no matter who is looking…" Indeed, as his presence was for Winfrey, the impact of Black fathers can be truly revolutionary in the lives of Black children. Her dad's legacy — as a barber, Councilman, and father — lives on in his remarkable daughter, Oprah Winfrey. She recently shone a much-needed light on Black fathers and Black fatherhood in her special, titled "OWN Spotlight: Honoring Our Kings, Celebrating Black Fatherhood." The event highlighted well-known fathers like D.L. Hughley and Kevin Hart, while celebrating and honoring exceptional Black fathers from across the U.S.

According to a Centers for Disease Control and Prevention (CDC) National Health Statistics Report, compared to White and Hispanic fathers, Black fathers remain more involved across a range of nurturing and involvement activities like sharing meals, bathing, diapering, dressing, and reading to their children.

The quest for "perfect parenting" is screwing us all

There are many benefits to this kind of paternal involvement, and these benefits include overall better outcomes (i.e., social, emotion and brain development), less toxic stress, fewer behavior problems, increased support and coping resources, and positive family norms.

Even fathers who do not live in the same home with their child can have this positive impact on child outcomes, providing additional opportunities for exploring and understanding self and environment, additional monitoring, expansion of the family support systems, and increasing family finances where possible.

Let's change the public narrative about Black fathers and shine a light on the hard work they have been doing under the shadow of myth, innuendo, and straight-up mischaracterization. More men than ever before are defining their identity through their connection and commitment to their children. For instance, Black fathers in the Dad gang — an online social community working to upset the dominant narrative and make Black fatherhood more visible — have taken to social media, living the common, messy, cute, and exhilarating moments of their dad lives before the world.

Most recently, Father's Day and Juneteenth coincided for the second time in 50 years. For Black men, that meant a celebration of what it means to be both Black and a father in America. Like Mr. Richard Williams and Mr. Vernon Winfrey, Black fathers want only to see their children happy, thriving, and reaching their fullest potential. Black dads continue to protect their progeny from the historical and current inequities and prepare them for a world that dads work to make progressively better.

Alvin Thomas, PhD, is an Assistant Professor of Human Development and Family Studies and the Phyllis Northway Faculty Fellow at the School of Human Ecology at the University of Wisconsin-Madison. He is a clinical psychologist and the founder and host of the Black Fatherhood Podcast.