The Ukrainian summer is almost over. As the Nazis found out in 1941, the cold seasons bring misery and defeat 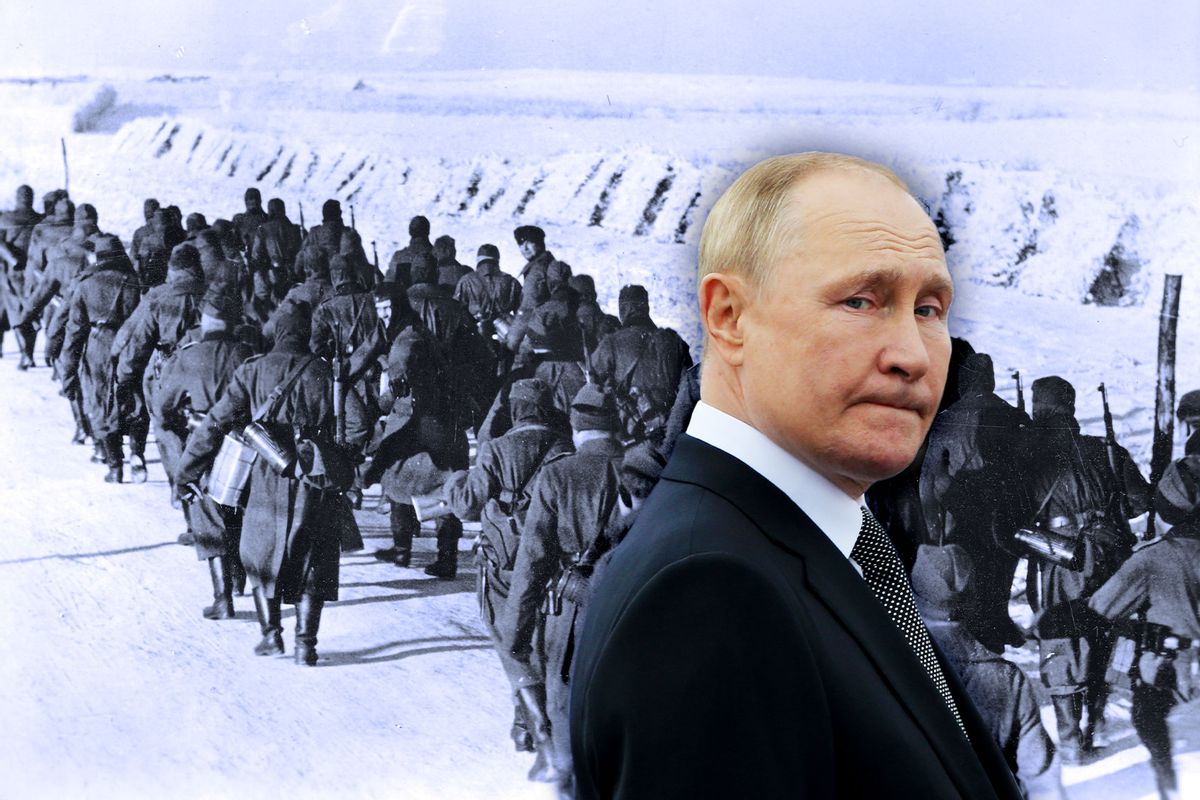 Russian President Vladimir Putin | Soldiers of the German Wehrmacht on the way to the front in Toropets, Russia, in 1943. (Photo illustration by Salon/Getty Images)
--

It's nice today in Kyiv: Temperatures around 75℉ with intermittent showers throughout the day. Kharkiv will be about the same, 80 degrees with occasional rain and patches of sunshine. It's going to stay pretty warm all week in Ukraine, as a matter of fact. By the weekend, it will be close to 90 and sunny in both cities.

Perfect weather for a war. The summer heat will dry up the muddy fields where sunflowers and corn and wheat grow in profusion in Eastern Europe's breadbasket. Down in the port city of Odesa, the first cargo ship carrying grain from the harvest in Ukraine has departed and is making its way unmolested through the Black Sea, because Russia and Ukraine recently reached an agreement to let grain shipments through the Russian blockade.

That's the good news. The bad news is that Russia's war against Ukraine proceeds apace, with no signs of letting up. That is especially bad news for Vladimir Putin, because the weather that's so nice today is going to get progressively worse as the heat of summer on the steppes cools in the fall, when the last of this year's crop will be harvested and the flatlands of central and eastern Ukraine will return to their fallow state.

The Four Horsemen of the 21st century: War, capitalism, fascism and mass death

You want to know what they call the time after the last harvest over there? The quagmire season, the months of cloud cover and cooling temperatures and rain and mud — fields of mud, oceans of the stuff in places where crops held the water and then the sun helped dry out the soil.

It's going to be like it was when Russia first invaded Ukraine in late winter and early spring — the other quagmire season, the one before the crops are planted and start to grow. Remember what the Russians had to deal with back then? Those aerial photos of long convoys of trucks and tankers and armored vehicles that were confined to the roads north of Kyiv because the minute they ventured off the pavement they would be axle-deep in the soupy mud of the same steppes that helped grind the Nazis to a halt in 1941 after Field Marshal von Rundstedt's army had taken Kyiv and Kharkiv and turned north for Moscow.

Hitler launched Operation Barbarossa in June of 1941. By the end of July, his northern army group under Field Marshal Wilhelm Ritter von Leeb was only 60 miles from Leningrad, its objective. By September, von Rundstedt had taken Kyiv, and by October, Kharkiv too had fallen to the Nazi advance.

To the north, the attack on Leningrad stalled and Hitler ordered that the city be cut off from the rest of Russia. A siege began that would last more than 800 days.

The attack on Moscow by Hitler's main force stalled, too. As November neared, the dirt roads around the Soviet capital had turned into what historians would describe as "rivers of mud." Nothing moved in the approaches to Moscow, and nothing moved to the south in Ukraine, either. Hitler's resupply lines were stretched thin to begin with. Now the quagmire season was slowing them even more, and the German army was looking into the teeth of the snow and ice and freezing temperatures of November and December.

As the Nazi attack stalled across its 1,800-mile front, the Soviet army was able to regroup and encircle individual German units and begin to achieve some tactical defeats. With resupply lines maxed out and the bitter cold setting in, the Germans were forced to retreat from their advance positions around Moscow. The Nazi air force, the Luftwaffe, was struggling against the weather, too.

Is there a lesson here for Vladimir Putin? You're damn right there is. Hitler announced that his war against the Soviet Union was one of "annihilation," the utter destruction of everything that got in their way. The Soviet army was weaker. Its air force was gone after initial attacks had knocked out thousands of planes on the ground.

Is there a lesson for Putin in Hitler's disastrous invasion of the Soviet Union? You bet there is — and it's one every Russian should know.

But the Soviets were fighting on their ground, and they had the advantage of a population that was on their side against the Nazi invasion. As weak as it was, the Soviet army could use resources provided by local citizens and knowledge of local backroads and hiding places to harass and confound the Nazi army.

If any of that sounds familiar, it's because it is. A much weaker Ukrainian army was able to hold off the massive Russian attack on Kyiv and even reverse it. The Russians have yet to take Kharkiv, and they have been fought to a standstill in town after town across the eastern front. The towns Russian forces have taken, like Severodonetsk, have cost them dearly in men, equipment and supplies. Russia appears to be executing its own war of annihilation on Ukrainian cities and their civilian populations, but the strategy shows no signs of weakening Ukrainian resolve.

British intelligence reported last week that Russia fired at least 20 missiles into Ukraine from positions it holds inside Belarus. On Monday, the New York Times reported that Russian forces are using the Zaporizhzhia nuclear power station across the Dnipro River from the Ukrainian-held city of Nikopol in the country's south as a firing position to shell Ukrainian forces with rockets and artillery. The Ukrainian military is reluctant to shoot back using new high-tech counter-fire artillery and rocket systems to target the Russian guns for fear of hitting the reactor and releasing a radioactive cloud into the surrounding region.

Recent reports suggest that Russia is losing "hundreds of casualties a day" in Ukraine, severely depleting its numbers of lieutenants and captains, the junior officers who command front-line units.

Reuters reported recently that U.S. defense intelligence officials believe that Russia is losing "hundreds of casualties a day" in Ukraine and severely depleting its numbers of lieutenants and captains, the junior officers who command front-line infantry and armored units in the war. Russia's chain of command is "struggling," a senior defense official told Reuters. Dara Massicot, a senior policy researcher on Russia at the Rand Corporation, reported on Monday that the damage being suffered by the Russian military "cannot be overstated." In a series of tweets, she said: "It goes beyond the numbers of men killed and equipment destroyed. This will also be a story of a military generation that is damaged or gone, and who remains."

Painting a grim picture of the state of Russia's military, Massicot continued: "Then, add in the mass casualty events that the Russian military has not coped with since WW2, being sent in unprepared for the Kremlin's war of choice, the lies, the war crimes, atrocities, the list goes on and on. The numbers of Russian casualties are severe enough — but the damage that will ricochet around inside those service branches after this war is over, will be worse."

These are not good signs for Vladimir Putin. Armies that are doing well strategically do not need to hide behind nuclear reactors or fire into enemy territory from redoubts across an international border. Now Putin will confront all the same ancient barriers that confounded Hitler: mud, snow, ice, vehicles with frozen engines that won't start and frozen artillery that won't shoot and frozen soldiers who are missing commanders who have been killed and don't want to fight.

Hitler had Operation Barbarossa. Putin has his "special military operation" in Ukraine. No matter what you call your war, Mother Nature gets to have her say.

It may be August right now — but winter is coming. This one won't be any better for Putin than the winter of 1941 was for Hitler.

about Putin and the Ukraine war