Why I wish George Jetson a happy birthday — whenever it is 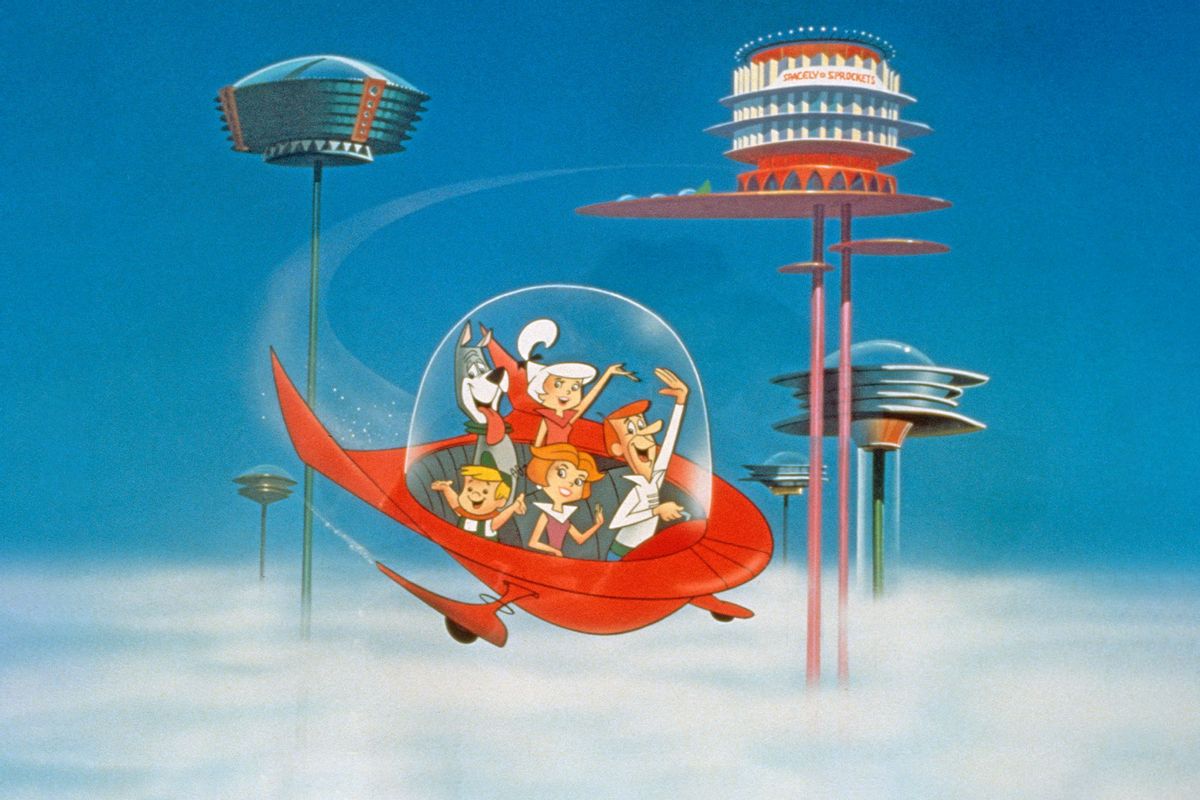 The Jetson family wave as they fly past buildings in space in their spaceship in a still from the animated television series, 'The Jetsons,' circa 1962. (Warner Bros./Courtesy of Getty Images)
--

"'The Jetsons' are f**kin' stupid," Big Greg said to a group of us kids while he sat on the steps of the chicken box joint, shinning his chrome pistol with a soiled rag. "'Flintstones,' all that s**t dumb."

I could agree with his "Flintstones" argument. It's not that I didn't watch the cartoon, I did. But Fred Flintstone was always mad angry and looking for an excuse to yell — Wilma didn't deserve that. And Barney was just a yes man, constantly on the wrong side of Fred's bullying. He had to be secretly living in pain as a result. Also, the Flintstones abused animals, using them to wash their bodies, dishes and cars, and as a zoo-hating six-year-old who once told my mother, "I never want to go to animal jail again," I easily equated the show with that experience. Now "The Jetsons" was different, though. There was nothing basic or prehistoric, using-your-raw-feet-to-stop-your-stone-wheeled-car nonsense about that show. Greg clearly didn't get it.

"I'm 26, dumbass," Greg spat back, concealing the weapon he just polished. Sometimes we used to pile up on the corner around older dudes to listen and learn game. They often sent us kids to the store to bring back other types of food when they were sick of eating chicken boxes, or to buy loose cigarettes, brown liquor and rolling papers. We'd always get back just in time for these kinds of debate. At times they were right, telling us what we needed to hear to get to the next day. And other times, those older guys were extremely wrong.

What would today's fairy tale look like if you could "un-Disney-fy people's brains"?

"Yeah, OK, shorty," Greg said, dismissing me and the rest of us kids to tend to his block business — greeting other older guys, talking trash, gambling and exchanging money.

Fast forward about 34 years after I pushed back on Greg's limited "Jetsons" critique and George Jetson, the goofy father from the space-age cartoon, was set to be born in 2022.

It wasn't strange for me to be sitting in the house, halfway through a bowl of cereal, watching George Jetson get reamed out by his boss, and hear shots ring out.

I didn't tell the guys on the corner this back when I was eight, but I had a sick obsession with "The Jetsons" during that time, even though the cartoon premiered in 1962, decades before I was born. The show's futuristic technology — the modern furniture, the machines that dressed them, the designer-looking sneakers, the transportation tube that shot them from home to work or school, the robot maids, space surfing on the back of flying cars, eating meals in the form of pills — made me feel inspired and gave me something to look forward to outside of the addiction and violence that plagued my neighborhood. In a way, "The Jetsons" made me feel safe. Safety was extremely important during that time period. We were in the beginning of what came to be known as The Crack Era, and guys like Greg didn't just clean and carry pistols for show. They used them.

According to my dad, our neighborhood was in the middle of civil war over crack territory and people were being shot left and right. Three people from my block were murdered that year. It wasn't strange for me to be sitting in the house, halfway through a bowl of cereal, watching George Jetson get reamed out by his boss, Mr. Spacely, and hear shots ring out. I didn't know at the time that I was 42 years older than my guy George — that he hadn't even been born yet.

"You know why I don't like 'The Jetsons?'" Todd, who was older than me but younger than Greg, said during the same debate. "Because it's no Black people on there. Like how you gonna write n****s out the future."

I never watched that cartoon, or any cartoon, the same after that. As an adult I reflected on some of the programming I consumed as a child. Maybe there were no Black neighbors in prehistoric Bedrock, but what excuse did "The Jetsons" have? We were here and living and making history when the show aired — what were they suggesting had happened between 1962 and 2062? As a Black person, it's wild to think we were so invisible that cartoonists couldn't even imagine us in the future.

It's wild to think we were so invisible that cartoonists couldn't even imagine us in the future.

As a child, I thought the older guys were trying to get me to toughen up and not watch cartoons because that was kid stuff. But now I understand they couldn't connect because they didn't feel seen — they just didn't always articulate that in the most authentic way.

One day I called Greg, who had spent 15 years in prison and has had a world of life experiences since the late '80s, back when we first discussed "The Jetsons," and told him a new "Jetsons" series was reportedly in the works.

"I don't be on HULU and all that," he laughed. "They hire anybody Black on the reboot?"

We shared a few more laughs before I thanked him for noticing the problem with the show.

"You know D, you was a good kid at the core, before all that street stuff," Greg said. "I wasn't nobody's example, you know that. But other than Fat Albert, they never put no Black people on no cartoon."

I then recapped our exchanges from back when I was a kid, and told Greg that it was George Jetson's birthday, that this was the year, and maybe even the week, the character was supposed to be born.

"Damn, George gotta birthday? I lived long enough to share time with the Jetson family?" he laughed. "Who would have knew?"

"Same thing I said," I replied. "We here. Happy birthday to George!"

about diversity and inclusion in pop culture: