With monkeypox and polio to worry about now, who can stress about small stuff? 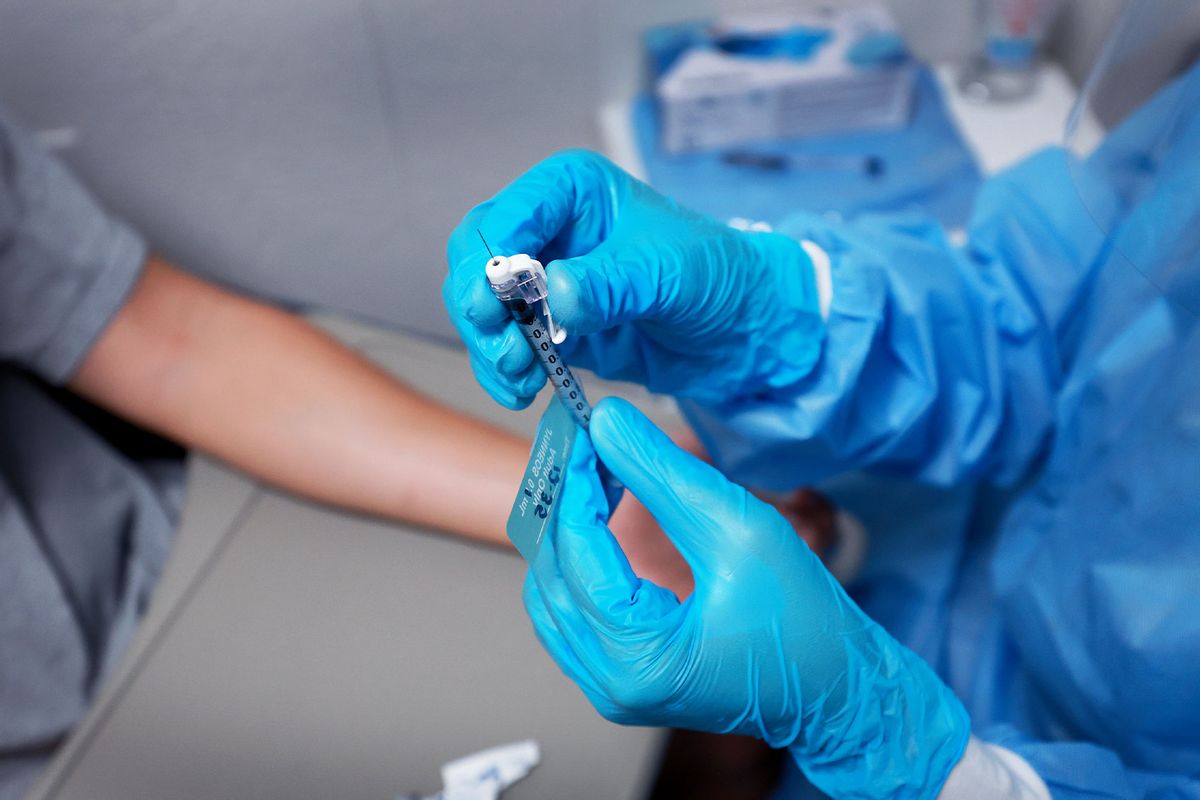 A registered nurse prepares to administer an intradermal monkeypox vaccine to a person at a vaccination site setup in Tropical Park by Miami-Dade County and Nomi Health on August 15, 2022 in Miami, Florida. (Joe Raedle/Getty Images)
--

Monkeypox keeps finding its way onto my timelines — photos, videos, TikToks and livestreams from people who have contracted it raising awareness of what a positive case of this viral disease looks like. Like a car wreck in a traffic jam, I can't look away. Monkeypox looks painful, and the screen makes it feel close. It's good if folks who have been diagnosed have found a positive way to deal with it, and yet even the idea of another viral outbreak terrifies me. This on top of what feels like a dozen strands of COVID still floating around, and polio. Who knew polio could come back?

My family tries to consider the relative dangers of each of these plagues in the most responsible ways we can — we vaccinate, we mask, we distance — as we fight for normalcy.

My daughter Cross was born in January 2020, two months before the world locked down in the first wave of the COVID-19 pandemic. Everything during her first year of life was extremely scary and extreme in unexplainable levels, from the way I soaked all our incoming packages in off-brand disinfectant because of the global Lysol shortage to the plastic bubble tent my wife created to shield the baby during doctor visits while I wore a Hazmat suit. We literally took every precaution. And even now, as the world opens up more and more, we are still playing it safe while trying to get the baby exposure to people who aren't her parents and grandparents. And with that in mind, my wife and I decided to take her to one of my public book events.

As students return to school, fears of monkeypox transmission linger

Attendance at my book, film and writing events has been hit and miss during the pandemic, with all the new COVID strands that continue to pop up pushing people back into their homes after they've started to venture out. I've read to groups as small as 10 and spoken to crowds of more than 100. And since I've done so many recent events in my home town of Baltimore, we figured my last for a long while wouldn't be too crowded, and baby girl would get see her old man on stage for the first time.

"Daddy! Daddy, I want Daddy!" Cross screamed like a crazed fan as I found my place on the stage. She was so excited that my wife and her sitter Nia took turns taking her in and out of the room.

"Don't mind that kid, I think I owe her money!" I said to the crowd.

The theater was big, and the crowd of about 50 people were able to space out. Everyone was masked accept me and my interviewer, Heidi Daniel, President and CEO of the Enoch Pratt Free Library, because we were on stage. Our conversation went well — Heidi and I dropped some gems, most of my jokes landed, and I sold some books. After the event, my family, including my daughter, went with a small group of friends to a nearby restaurant to grab a quick a bite.

We are still playing it safe while trying to get the baby exposure to people who aren't her parents and grandparents.

We all felt we were being responsible with our shiny plastic lanyards protecting our vaccination cards in a restaurant was that was otherwise empty. We ate like we'd never eaten before, cleaning our plates until they were shiny, scraping away any evidence of food. Cross even finished an adult order of fries. But it was 10 p.m when we finished, and our daughter is normally washed, read-to, and in bed by 8:15. So as you can probably imagine, she was cranky, clingy and ready for sleep.

My wife and I had arrived in separate cars. "Are you riding with me or your daddy?" she asked Cross. Cross didn't answer, just wrapped her tiny arms around my shin. I took her hand and we made our way to my car. The two of us walked down the block singing "The Finger Family" song as a goofy couple passed us.

"Hey," the guy said, while the woman he was with stared at me briefly and looked away. I nodded.

"Mommy finger, mommy finger where are you?" Cross continued.

"Mommy finger drove home in her own car," I answered.

"No, Daddy, no," Cross replied and then proceeded to sing the song in the correct manner as we approached our car.

While snapping Cross into her car seat, I heard a voice yell.

"What!" I spat back, swinging around with a clenched fist, which startled the guy who was now standing behind me. It was the same dude from the goofy couple who had just walked by us.

"Yo, why you sneak up behind me like that."

"I'm sorry, sir," he said. "We were knocking on doors trying to find out who owns this car. I hit your tire."

"I'm sorry for yelling, man. It's late and I got my baby," I said, taking Cross out of the car seat and walking around to the other side of the car to assess the damage.

"Oh sh*t," Cross repeated, slapping her hands on her face like that "Home Alone" kid.

"Don't say that baby, I'm sorry," I said to her as I looked at what I hadn't seen as we walked up to the car — a smashed tire, cracked rim, bent axel and crumpled door. I called my wife and got voicemail.

"It's my fault, please call my insurance company, I accept full responsibility," the kid said.

That's honorable, I thought. The kid was calm, clearly wasn't inebriated, and didn't smell like weed, so what happened? The street is large and empty. How did he hit a parked car?

My wife shot out of the corner like a bat out of hell and leapt from her truck. It's like she had sniffed out our problem. I know her temper, her hunger to protect us and the way she loves our daughter, so I rushed toward her.

I explained to her that the guy is only 20 and nervous. His new car is wrecked, with both airbags deployed.

"His night is ruined, baby. And I know he didn't wake up this morning dreaming of crashing into our car."

I ushered my wife and daughter back to our truck, fastened Cross in and climbed into the driver's seat. As my wife gazed out of the passenger side window, I attempted to explain the two ways I viewed our current situation.

They crashed into the car five minutes before Cross and I arrived.

I could complain like a child, because how can you be sober and hit a parked car in zero traffic? Everybody hates dealing with insurance companies — even insurance companies hate dealing with insurance companies — and this is going to inconvenience my night. Better still, it's going to inconvenience my year, because I've heard cars like mine can take up to six months to get fixed, so my rental car will run out before my car is ready, and the car will never be the same after repairs, and who wants a car that's been smashed into anyway, and it's late and my two-year-old is doing what two-year-olds do after their bedtime, and why is his girlfriend so quiet? Who or what caused the accident? Fuss and complain, fuss and complain.

Or I could be thankful. They crashed into the car five minutes before Cross and I arrived. My two-year-old is safe and I am safe and my wife is safe. And everyone, including the people who wrecked into our car, are safe and will make it home safely. I have insurance, the kid has insurance, our cars will be fixed, and life will continue. So why would I act like child? Sure, I'll be inconvenienced. But we will all live.

"Imagine being out here with a crushed car, no insurance, COVID and stage-8 monkeypox," I said.

"Oh God!" my wife responds, before she turns around to pat our daughters leg.

"Baby, we can always choose to not act like children," I said, while looking at Cross, who was kicking and laughing and crying — clearly acting like a child. We laugh.

A cop who looked and acted just like Eric Andre pulled up with the tiniest flashlight in the world and conducted a tiny, unnecessary investigation. The kid had already admitted fault. But I didn't complain. The cop's questions and presence made us laugh — it turns out we're both Andre fans. The cop gave us a report number, I left my keys in the car and yelled over to the kid, "Yo, you good? You need anything?"

I told him not to worry and that stuff happens. Then I shot him a peace sign and took my family home.

The next morning I woke up to a horrible LA Times story about a traveling nurse who plowed her car into traffic, killing five people. The people she killed were probably out in the world trying to get used to the new normal just like my family.

It's scary staying in the house because of the lack of social interaction. It's scary leaving because of the multiple viruses on top of human dangers like out-of-control drivers. Both roads are paved with roses and thorns. What makes the Los Angeles traveling nurse's story worse is that she had been involved in 13 prior car crashes, accidents from which she actually made it home. This time she didn't make it home. She's facing murder and manslaughter charges now.

My family made it home to sleep in our beds that night and had the opportunity to try again the next day. Even if I had been a little banged up, or if I caught COVID or another virus, everything would likely still be OK for me. I still have my life and my freedom. What do I have to complain about? Things can always be worse. That lesson has been constant over the last two years.

essays about memorable encounters with strangers: