Trump donors think they're giving to "save America," but they're paying Trump's legal bills 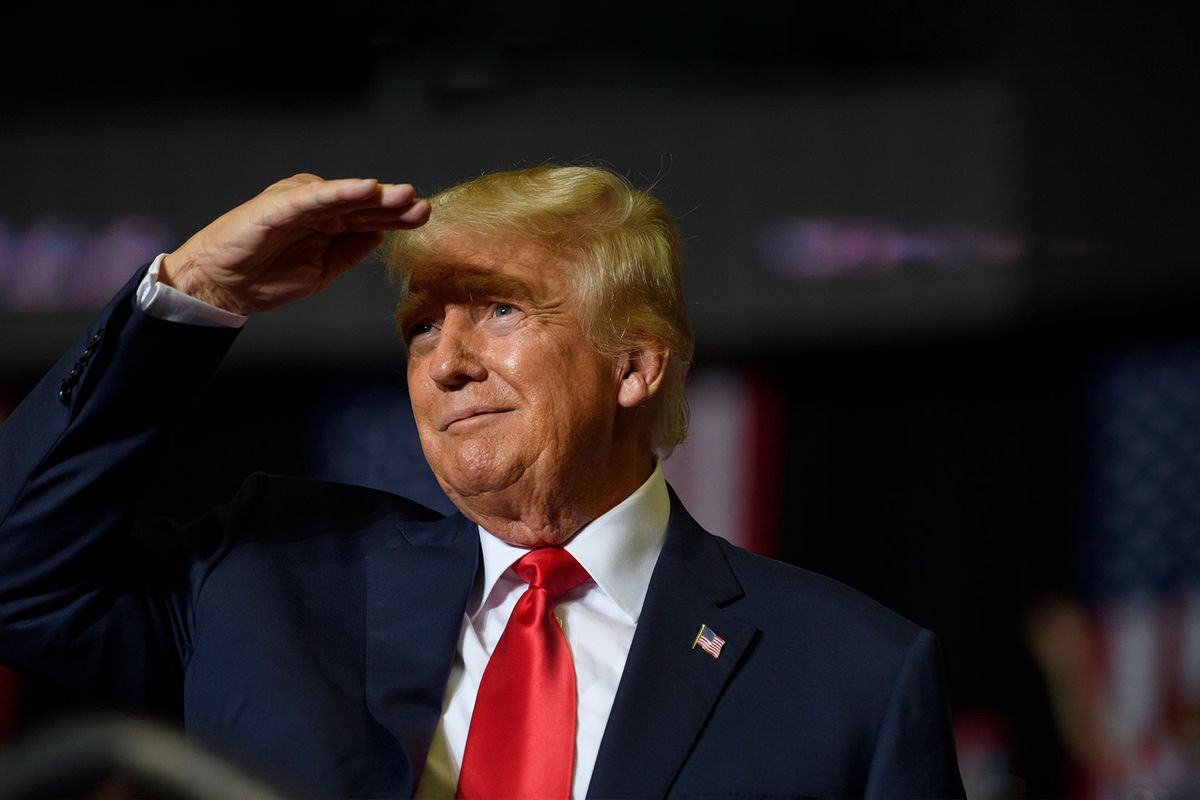 Former President Donald Trump speaks at a Save America Rally to support Republican candidates running for state and federal offices in the state at the Covelli Centre on September 17, 2022 in Youngstown, Ohio. (Jeff Swensen/Getty Images)
--

When one is under federal investigation for serious crimes like potential espionage, the usual legal advice is to be silent. Lawyers tend to get nervous when clients talk publicly about their cases, fearful that they will inadvertently provide evidence prosecutors can use against their clients in court. But after the FBI raid on Mar-a-Lago in August, Donald Trump has not shut up. He rants on Truth Social about the FBI, portraying himself as the victim of an "unwarranted, unjust, and illegal Raid," even though there appears little doubt that he was in possession of classified documents he appears to have stolen from the government. He gives lengthy and often ad-libbed speeches, ostensibly in support of Republicans running for office, in which he complains about his alleged victimization at the hands of the FBI.

Trump's lawyers haven't put a stop to this, quite possibly because quieting Trump is an impossible task. But it's also true that Trump has been fundraising heavily off the FBI raid for his leadership PAC, Save America. The PAC ostensibly exists to help Republican candidates win races, but as CNN reported last Tuesday, the majority of the money is going straight to Trump's lawyers. Out of the $6.3 million spent by the PAC in August, over 60% — $3.8 million — was spent on Trump's legal fees. That's over 24 times what the PAC spent on actual candidates that month — the only expenditure listed under the PAC's ostensible purpose was $150,000 spent to defeat Rep. Liz Cheney, R-Wyo., in her primary.

As Salon reported at the time, Trump created this PAC immediately after losing the 2020 election, and it appeared shady from the start, rife with fundraising appeals that misleadingly implied President Joe Biden stole the 2020 election. Trump's PAC may be excessive, but due to Supreme Court-forced deregulation of campaign finance laws, it's actually normal for leadership PACs to be awash in grift. Money that donors think is going to political campaigns instead is often spent on funding politicians' lifestyles — paying for airfare, restaurant meals, and other luxury goods and services. As campaign finance expert Brett Kappel told Salon in November 2020, "Save America funds could be used to pay many of the legal fees Trump will incur after he leaves office."

Trump's PAC has been under heavy scrutiny for months now, both by law enforcement and by Republican leadership, albeit for entirely different reasons. Law enforcement is mostly concerned with questions of whether Trump defrauded his donors or used the money for illegal purposes. As the New York Times reported earlier this month, "A federal grand jury in Washington is examining the formation of — and spending by — a fund-raising operation created by Donald J. Trump after his loss in the 2020 election as he was soliciting millions of dollars by baselessly asserting that the results had been marred by widespread voting fraud."

"This is their message": Trump and GOP immediately rush to fundraise off FBI raid on Mar-a-Lago

Indeed, Trump has raised over $100 million for this PAC, with emails both falsely implying that the 2020 election was stolen and that giving Trump money will help him be reinstated as president. This, however, is not what is bothering GOP leadership. As Jackie Calmes of the Los Angeles Times writes, "Trump is vacuuming up so much from small donors and funneling almost none of it to party candidates," despite hitting donors with endless emails promising "he's helping Republicans capture control of Congress."

Trump went into September with over $90 million in his PAC, while the National Republican Senatorial Committee (NRSC) has less than $16 million. Part of the reason is the NRSC chair Sen. Rick Scott of Florida has mismanaged the fund. Still, it's hard to ignore the fact that small donors are giving to Trump rather than to other Republicans, often at Trump's own behest. He's sent fundraising emails calling other Republicans "RINOs" (short for "Republican In Name Only"). Trump's PAC has also sucked down more of the donation pool through shady tactics like tricking donors into donating twice, by automatically signing people up to do so and making it difficult to opt out.

"He helped nominate many of the candidates who won primaries, and many of them are having a really hard time raising money," a Republican strategist who works for Senate Minority Leader Mitch McConnell griped to the Washington Post. But rather than raising more money to elect Republicans, Trump's PAC has solicited money for a new private plane and paid a fashion designer $60,000 to consult Melania Trump on her wardrobe. Until the FBI raid on Mar-a-Lago, Trump even had the Republican National Committee paying his legal bills. He's tapping his massive war chest now because they finally cut him off.

It's unlikely Trump's battle with the DOJ over his possession of classified documents is going to get any cheaper for his donors. Trump did manage to venue-shop his way to Judge Aileen Cannon, a Federalist Society member he put on the court who issued a widely-criticized decision to slow down the FBI investigation by appointing a "special master" to review the classified documents. But the "special master," Judge Raymond Dearie, is not making things easy for Trump's team, insisting they provide evidence for Trump's unlikely claims that he declassified the materials before removing them illegally. Now he and his family are facing a civil fraud suit filed by New York Attorney General Letitia James, with $250 million on the line, plus significant corporate penalties.

Trump's standard legal tactic is to gum up the system by filing unnecessary motions, which he will no doubt be doing in these cases as well. As his long legal history shows, this strategy is both effective and expensive. But it won't be expensive for him. Trump's donors will be footing the bill, even as many mistakenly believe their money is going to elect Republican candidates.