As Trump spoke in support of J.D. Vance, a song played called “WWG1WGA,” shorthand for “where we go one we go all" 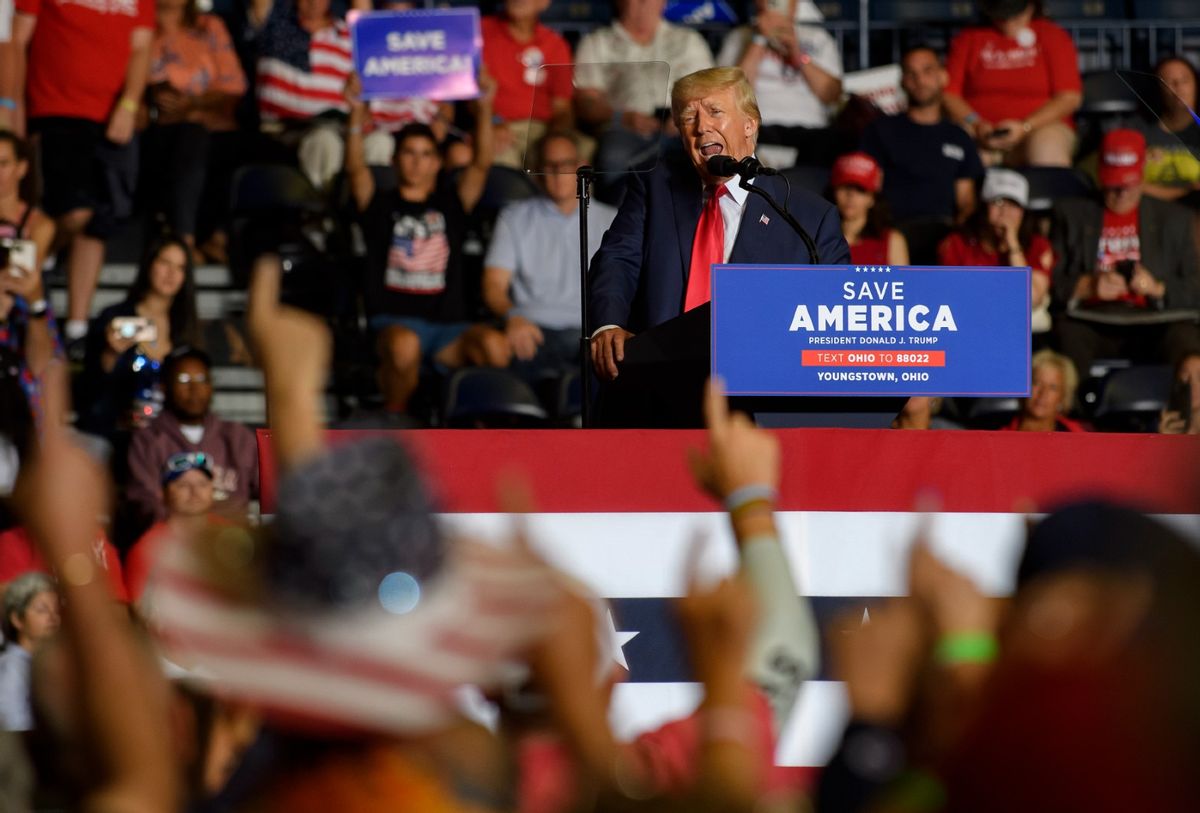 Audience members put their index finger up to symbolize America First while Donald Trump speaks at a Save America Rally to support Republican candidates running for state and federal offices in the state of Ohio at the Covelli Centre on September 17, 2022 in Youngstown, Ohio. ( Jeff Swensen/Getty Images)
--

During Trump's speech in support of J.D. Vance at the Save America rally held in Youngstown, Ohio on Saturday, members of the crowd raised their hands in a one-finger salute. As this was happening, a song called "WWG1WGA" played overhead — shorthand for "where we go one, we go all," a slogan used by members of QAnon.

As Salon coverage from earlier this week points out, Trump has "expressed his explicit support for QAnon – which promotes the idea that Trump is the savior of the American people" – by sharing a photo of himself "wearing a Q lapel pin, with the QAnon catchphrases "The Storm is Coming" and "WWG1WGA," on his Truth Social account." In June it was also widely reported that he publicly endorsed QAnon conspiracy theorist J.R. Majewski for a seat in the U.S. House of Representatives via Ohio's 9th Congressional District.

Trump is backing a full-fledged QAnon extremist in Ohio

"This is the week when Trump became QAnon," says CNN Analyst Juliette Kayyem on Twitter along with a video clip from Saturday's rally. "This isn't a political statement; it just is, however disturbing. Week began with images of Trump on Truth Social wearing a Q pin and promoting their slogans; it ends with Q music and the Q "one" sign by crowd at his rally."

As Trump spoke these words slowly, as though reading a poem, "WWG1WGA" played in the background. Seemingly moved by what they were hearing, many people began to raise an arm, and then a single finger, in salute.

"We have a president who is cognitively impaired, and in no condition to lead our country; which may end up in WWIII," Trump continued in his speech. "We are a nation that no longer has a free press and has no fair press any longer. Fake news is all you get, and they are truly the enemy of the people. We are a nation where free speech is no longer allowed. Where crime is rampant like never before."

At this part of the speech, a woman wearing a MAGA cap seated in the crowd directly behind Trump can be seen – eyes closed and hand in the air – muttering words to herself as though praying.

Amidst anti-Biden sentiments, railing against the news and bashing the current economy, Trump also worked in hints to a possible run in 2024.

"After what happened and watching our country go to hell, we may have to do it again," he said to the crowd.