Why hot foam could be the weed killer of the future

A biodegradable foam could be a more effective weed killer than RoundUp, study suggests 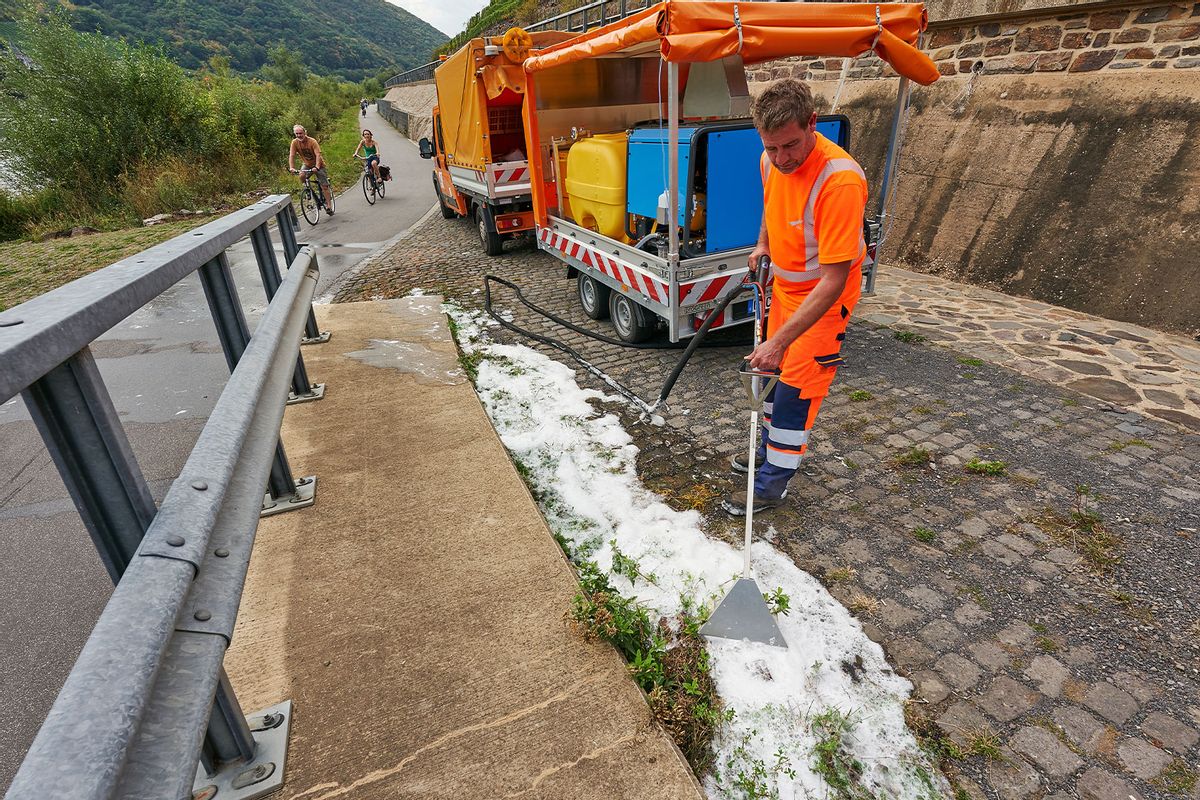 A road guard removes weeds from the edge of a cycle path using a hot foam machine. (Thomas Frey/picture alliance via Getty Images)
--

Like many human inventions, pesticides come with numerous benefits but at a high cost. Just like plastics are simultaneously useful and toxic, the chemicals we spray to kill bugs, weeds and fungi can protect our farms but wreak havoc on the planet and our bodies.

But it's not like we can simply allow our fields to be overrun by pests. The resulting decline in crop production would likely trigger mass starvation.

"Without the use of pesticides, there would be a 78% loss of fruit production, a 54% loss of vegetable production, and a 32% loss of cereal production," a study published last year in the International Journal of Environmental Research and Public Health reported.

That's why finding effective alternatives to the most toxic pesticides are crucial. Not only would it slow the devastating rate of insect decline, which could destabilize the planet's entire ecosystem if not addressed; but also, more environmentally friendly pest control would improve soil, air and water quality while making food more safe to consume.  (Note that pesticide is a blanket term that refers to fungicides, herbicides, insecticides, among others; RoundUp, which contains glyphosate, is an herbicide and therefore also a pesticide.)

A particularly appealing eco-friendly pesticide is a hot biodegradable foam that can be sprayed on weeds. The foam, called Foamstream V4, creates a sizzling envelope that suffocates and destroys the unwanted plant. It's already commercially available and is made from a blend of plant oils and sugars derived from corn, wheat, rapeseed oil, coconut oil and potatoes.

Hot foam could be an effective alternative to glyphosate, the widely-used ingredient in RoundUp, which has been found in the urine of 80 percent of Americans. But while some research on Foamstream V4 has been done before, previous experiments have been small, lacked controls and weren't focused on largescale agriculture.

A team of Greek scientists from the Agricultural University of Athens and the University of Patras sought to amend this and secured four plots in two olive groves in Pyrgos and Kalamata, Greece to see how hot foam compared to other weed control methods.

First, they partitioned off the experiment site and inventoried the dominant weeds. In Pyrgos, the olive grove was dominated by charlock mustard (Sinapis arvensis) and cheeseweed (Malva parviflora) while the plantation in Kalamata was filled with burning nettle (Urtica urens), lichwort (Parietaria officinalis) and catchweed (Galium aparine), which can cause a rash in some people.

"The use of glyphosate throughout the whole field has been by far the most common method of weed control in most olive groves in the Mediterranean region in recent years," the researchers wrote in the journal Smart Agricultural Technology. "However, overuse of this particular herbicide cannot be considered a sustainable agronomic practice for weed control in olive groves and other major perennial crops in the near future."

Some weed plots were mowed, others were buried in mulch and some were sprayed with either glyphosate, hot foam or pelargonic acid, a corrosive and foul-smelling oily chemical that is sometimes used as an herbicide. The researchers also included control plots that received no treatment.

After a few weeks, the researchers used a handheld optoelectronic sensor that shoots bursts of red and infrared light at the weeds, which can indicate how unhealthy the plants are. They also took scissors, cut the weeds as the base, then bagged and weighed them to get an idea of how much biomass remained.

"The foam acted very quickly and the weeds looked stunted within an hour after treatment and showed signs of complete breakdown two days after treatment," the researchers wrote. At one of the sites, "Hot foam application resulted in 70 and 78% lower weed biomass than glyphosate and mulching, respectively."

Overall, hot foam and glyphosate were about equally effective at killing the weeds and preventing regrowth. However, many plants are quickly evolving resistance to glyphosate. Because the hot foam relies largely on heat to kill its target, there's less chance of weeds developing defenses against it. Besides, glyphosate has been demonstrated to be far more toxic and can linger in the environment for a long time. Another benefit of hot foam is that it breaks down quickly.

The other methods such as mulching or the pelargonic acid didn't fare nearly as well, but the authors emphasized that combining different strategies instead of using just one would be most advantageous. This approach is called Integrated Weed Management.

"Hot foam applications represent a new, smart concept in the area of thermal weed control," the authors conclude, including wrangling "species that are difficult to control by conventional methods."

However, things might turn out differently on other crops or weeds. Therefore, the authors recommend further research to "optimize the use of hot foam for weed control in olive groves, orchards and vineyards under different soil and climatic conditions."

Hot foam comes with some drawbacks. It requires a large machine that can be difficult to use on huge fields, for example, so it may not scale very well. But it could represent a new frontier in how we control weeds without hurting ourselves in the process.