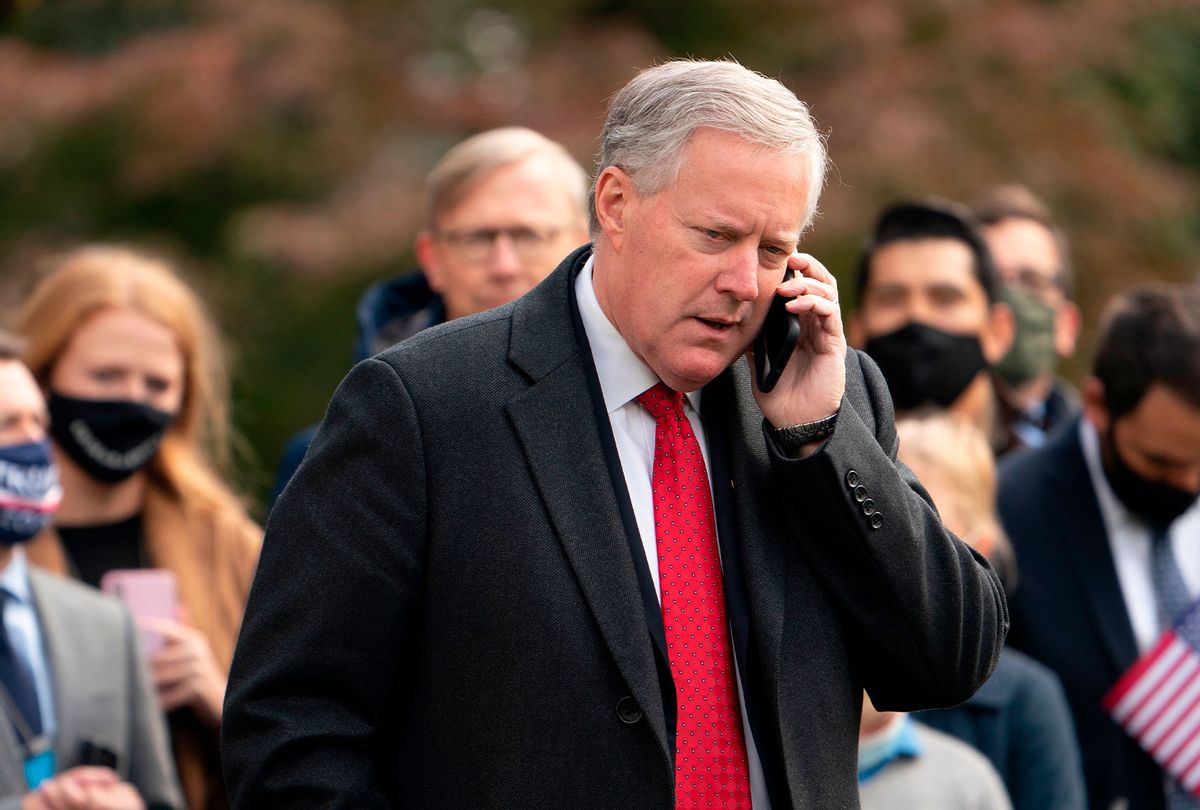 After Donald Trump lost the 2020 presidential election to Joe Biden, then-White House Chief of Staff Mark Meadows was among the many MAGA Republicans who aggressively promoted the Big Lie — claiming that the election had been stolen from Trump and aggressively looking for possible ways to keep Trump in the White House. One of the fellow Trump supporters Meadows worked with during that period, according to CNN reporter Zachary Cohen, was Republican operative Phil Waldron.

"As allies of then-President Donald Trump made a final push to overturn the election in late-December 2020, one of the key operatives behind the effort briefed then-White House Chief of Staff Mark Meadows about his attempts to gain access to voting systems in key battleground states, starting with Arizona and Georgia, according to text messages obtained by CNN," Cohen reports in an article published by CNN's website on September 26. "Phil Waldron, an early proponent of various election-related conspiracy theories, texted Meadows on December 23 that an Arizona judge had dismissed a lawsuit filed by friendly GOP lawmakers there. The suit demanded state election officials hand over voting machines and other election equipment, as part of the hunt for evidence to support Trump's baseless claims of voter fraud."

Cohen continues, "In relaying the news to Meadows, Waldron said the decision would allow opponents to engage in 'delay tactics' preventing Waldron and his associates from immediately accessing machines. Waldron also characterized Arizona as 'our lead domino we were counting on to start the cascade,' referring to similar efforts in other states like Georgia. 'Pathetic,' Meadows responded."

According to Cohen, those previously unreported text messages "shed new light on how Waldron's reach extended into the highest levels of the White House and the extent to which Meadows was kept abreast of plans for accessing voting machines — a topic sources tell CNN, and court documents suggest, is of particular interest to state and federal prosecutors probing efforts to overturn the 2020 election."

According to Cohen, Waldron has "emerged as a key figure in the broader scheme to overturn the election and was the architect of several extreme proposals for doing so" — including "a PowerPoint presentation."

"Waldron also helped draft language for an executive order directing the Pentagon and Department of Homeland Security to seize voting machines on behalf of the White House," Cohen reports. "Trump never signed the order, siding with White House lawyers who insisted the idea was legally perilous. But there is evidence that his closest allies, including Meadows, continued to entertain similar pitches from Waldron in the lead-up to January 6, (2021) as they sought to validate conspiracy theories about foreign election interference."